Terrorism doesn’t care if you are non-Muslim or Muslim, Brussels and Turkey are proof of that 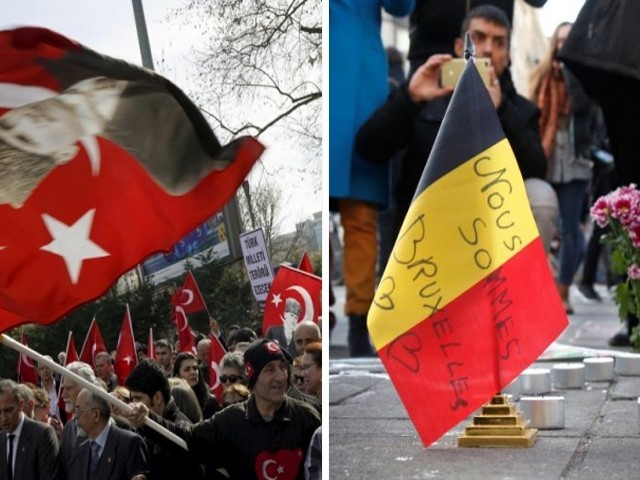 It is devastating to see the world react to Brussels with such concern, and completely miss looking over its shoulder at Turkey.

ISIS has claimed responsibility for the attack in Brussels. This could be a revenge attack in response to the Paris terror suspect Salah Abdeslam’s arrest in the city, last Friday. This could also be a symbolic attack against the European Union. Or it could just be another venue for a terror attack after Turkey, as the world watches in horror.

It would be an oversimplification to suggest that ISIS is a group of overzealous Muslims working towards the ‘holy’ cause of establishing an Islamic Caliphate; they kill innocent civilians, both Muslims and non-Muslims. They work carefully to draw a wedge between ethnicities within a country to spark dispute. They target vulnerable people and brainwash them for carrying out heinous crimes. They attack soft targets of symbolic importance to create a global monopoly over terror.

Did ISIS come into power to strengthen Islam or create a stronghold for its followers?

Not by any stretch of the imagination did Islam, or Muslims, require their services.

The Iraq war was a foreign policy disaster. Camp Bucca, widely believed to be the breeding ground of ISIS, was not a convention for pious Muslim men. It was a detention facility for the prisoners of war in Iraq; it brought together people from Saddam Hussein’s army, the regime and others who now had a common enemy. It allowed these men, including the current leader of ISIS, to coalesce into a group and launch a unifying ideological narrative.

Meanwhile, US efforts to enforce a western model of ‘democracy’ in Iraq were not bearing any fruit. One of the reasons was the lack of understanding of the ethnically diverse society and the importance of an amicable power sharing agreement amongst the three dominant ethnic groups: Shiites, Sunnis and Kurds. As the foreign military forces prepared to withdraw, the country slipped into civil war. The resulting power vacuum allowed ISIS to gain control in Iraq. Failure of the government in Iraq, conflict in the Middle East, proxy wars and the opportunity for seizing power in the region, all added up to creating ISIS. The abysmal socio-economic situation in Iraq with no hope for a bright future makes an entire generation of people that have grown up only knowing war, vulnerable to radicalisation.

Islamophobia is on the rise as ISIS has successfully recruited Muslims, born and raised in Europe, to turn against their country. The recent terror attacks in Europe have sparked a discussion regarding Muslim ghettos; particularly in Brussels and Paris. These are neighbourhoods that are marred with poverty, drug abuse and unemployment. The people in these communities either do not find opportunities for upward mobility in the society or willingly live in their cocoons. The disenfranchised men in these neighbourhoods are falling prey to ISIS recruiters. Many of the attacks in France and in Belgium have been traced back to a slum in Brussels. Using Islam as an ideological basis works well for ISIS as it presents a unifying cause that can attract sympathisers by transcending borders and nationalities.

It remains to be seen how Europe will respond to the attacks in Brussels, as far as concrete policy steps or a change in strategy against ISIS are concerned. While world leaders condemned the terror attacks, prospective US presidential candidates also presented their stance on the situation. Donald Trump was quick to capitalise on this catastrophe by suggesting that attacks in Brussels were “just the beginning”. He also directly associated the attacks to Muslim immigrants and the refugees going to European countries. He has also previously criticised Angela Merkel for “ruining Germany” with respect to her policy of welcoming refugees into the country. It can be conjectured that these attacks will only serve to solidify his position on national security in the US and attract more support from the Republican base, as he continues to incite fear. The Republican front-runner had suggested a “total and complete” halt on Muslims entering the US, “until the country’s representatives can figure out what is going on” following the attacks at San Bernardino.

His suggested policy against immigrants and Muslims, while inviting sharp criticism from many in the party, has resonated well with enough Republicans to make him the frontrunner.

The attack in Brussels will prove to be catastrophic for refugees seeking asylum in European nations. Just days ago, European officials discussed their apprehensions at the Brussels Forum regarding the refugee and migrant crisis. There were concerns that ISIS might be sending fighters disguised as Syrian refugees, to carry out more attacks like the ones in Paris last year. Also, European countries are not willing to bear the economic strain of providing social services to refugees. Recently, anti-immigrant right-wing AfD fared very well in the local elections in Germany, which is considered a reaction against Angela Merkel’s open-door policy towards refugees. The crisis is being credited with fuelling the rise of right-right parties all across Europe, as evidenced by last year’s elections.

It is, however, devastating to see the world react to Brussels with such concern, and completely miss looking over its shoulder at Turkey – a country that has been brought to its knees these past few days. The key to fighting this menace lies in collective acceptance of the fact that terrorism does not care whether you are non-Muslim or Muslim – it will attack regardless. Talking about one attack in a European country and dismissing the attack in the Muslim country by the same forces of terror will not help anyone.

The author has a graduate degree in Public Policy from the Georgetown University and has a keen interest in Economic Development and Foreign Policy issues.