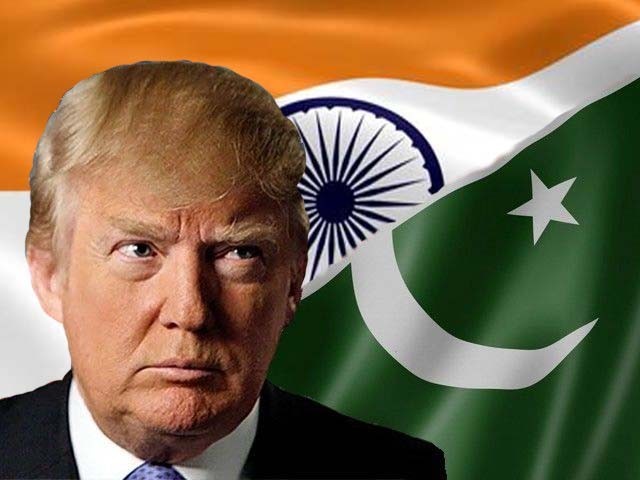 Adolf Hitler had forewarned the world about his wicked intentions in Mein Kampf in 1925, years before he implemented his satanic plans of exterminating the Jews from the world.

He wrote in the book:

“Hence, today, I believe that I am acting in accordance with the will of the Almighty Creator: ‘By defending myself against the Jew, I am fighting for the work of the Lord.”

Yet, the international community did not pay heed to Hitler and the Germans went on to democratically elect him with a thumping majority. The rest is history.

Imagine someone like Hitler heading the most powerful country in the world. It sends a shiver down one’s spine.

I have come across many hateful individuals in my own country, but the Republican White House hopeful Donald Trump takes the cake. The more I go through the abominable utterances, gestures and re-tweets of this repulsive man, the more I am inclined to believe that Trump – who could one day be the president of the United States – is no different from Hitler.

Wow, what a day. So many foolish people that refuse to acknowledge the tremendous danger and uncertainty of certain people coming into U.S.

Our country is facing a major threat from radical Islamic terrorism. We better get very smart, and very tough, FAST, before it is too late!

Much has been written about Trump’s hate for the Muslims like how he plans to ‘temporarily’ bar their entry into the US until the country’s representatives could figure out, “what the hell is going on”. Or how he intends to put their mosques under surveillance and seeks a national database to register all Muslims living in the US to protect the country against terrorism. This sad excuse for a man also wants a ban on entry of Muslim refugees fleeing violence in Syria because “we do not know who they are”.

First they send their country back to the Stone Age by bombing it to the hilt and then deny these fellow human beings a safe shelter and refuge because Trump doesn’t know who they are. Hypocrisy thy name is Donald Trump.

He wishes to ‘take out’ the families of ‘terrorists’ and dreams of building a great wall at the US-Mexico border in a bid to stop ‘rapists’ sneaking into his country. In fact, his mind never ceases from engendering one fiendish idea after another.

Trump was also all praise for North Korea’s dictator Kim Jong-un, for the “amazing” way he wipes out his political rivals; he once appeared to defend Putin for killing journalists, political opponents, and invading countries because “he is at least a leader”.

According to some reports, the majority of his re-tweets are from accounts linked to white supremacists and neo-Nazi sympathisers.

#WhiteGenocide is not "supremacy" – that's leftspeak. @realDonaldTrump reads @AnnCoulter – has raised issue in past. pic.twitter.com/qRU1THsube

What could be xenophobia, racism, bigotry and white supremacies for others, Trump considers ‘common sense’.

“I am not bothered because I believe I am doing the right thing. I have common sense,” he told a CNN anchor a few months ago.

Criticisms roll off Trump like water off a duck’s beak and when confronted, he wants people to look at “my rallies who gave me a standing ovation when I read out my statement”.

And then he quotes or rather misquotes a wonderful human being like Mahatma Gandhi, who lived and died for others, to give credence to his bigotry and hate. Nobody’s laughing at you, Mr Trump. We all are very concerned and troubled at the prospect of you, the hateful you, becoming the most powerful man in the world.

For when there’s a pressing need for integration and uniting the humanity under the all-encompassing umbrella of brotherhood and friendship, Trump calls for segregation, subjugation and murder of fellow human beings. But when he wishes to impose a ban on Muslims and others, he forgets his own roots. America is a land of immigrants, immigrants from Europe, Africa and all around the world. Aboriginal Indians were first conquered and displaced from their own land by people like Trump; then blacks were brought shackled in chains in slave ships, stacked like sardines in the ships’ hulls by people like Trump.

Author Charles A Taylor writes in his book, Juneteenth: A Celebration of Freedom:

“In the darkness beneath the deck, blacks were forced to lay in sickening stench filled with waste, disease, body lice and rodents for up to twelve weeks. Often the dead weren’t removed for days, and the seawater turned the decomposing bodies soup-like, creating an unbelievably horrible and suffocating odour.”

Yet, this country moved on, made amends and welcomed one and all, something which made America great. But the US is also a country that loves waging wars on other nations for no fault of their own; it is also at war with itself, steeped in violence from top to bottom.

According to a report, the US averaged a little over one mass shooting every day in 2015. With over 310 million firearms estimated to be in the hands of private citizens – that is, roughly 97 guns for every 100 people – the US is potentially the most violent and dangerous country on the planet.

And today, Trump and his supporters are bent on ruining everything around us, moving the world towards its perdition and ultimate destruction, fanning the fires of conflicts to benefit multi-billion dollar arms industries back home when the need of the hour is to resolve them.

Trump “loves” Israel – at least, he loves something – and no prizes for guessing his feelings for poor Palestinians. He believes India is a check to Pakistan because they have got “their own nukes”. He says he won’t kick out Indian students because the US needs smart people. True, if the Americans were smart, they would not be coming out in multitudes to extend their support to a man like him. And I am convinced Americans are smart, indeed.

Neither does Trump know our history nor is he aware of the love that exists in our hearts for each other. We, Indians and Pakistanis, are blood brothers who were separated at birth in 1947. We do have issues and we are more than capable of resolving them without any third party interference. Do we need a Trump to poke his nose into our matters? Certainly not!

India and Pakistan should especially beware of Trump and his ilk. If he becomes the POTUS, he is most likely to pit us against each other and enjoy the show from a safe distance as he has already indicated. The military-industrial nexus in the US – whose sole aim is to make a profit at the expense of others, even their own people – is pulling out all the stops to have someone like him at the helm of the White House.

Trump must tame the evil inside him, if he can, for the world will not survive another Hitler.