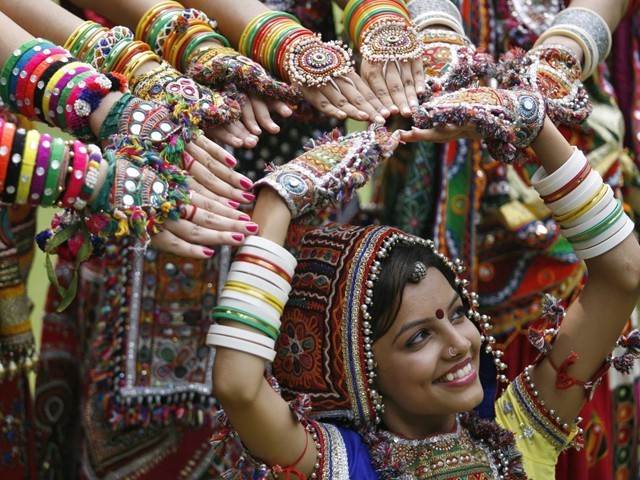 Special ‘racist’ measures will be taken to ensure that no non-Hindu gains an entry into the Garba events. PHOTO: REUTERS

I vividly remember the time I spent during my school and college days with Ghulam Farid, one of my best friends. He was like family to me. We have, however, not been able to catch up ever since I moved to Delhi and he remained in Rajasthan taking care of his family business.

We would celebrate our respective festivals together every year. On Eidul Azha he would always invite me to his place, and I would relish the scrumptious biryani and mutton curry cooked by his gracious mother. On Diwali, I used to go to his shop and offer him sweets. And on Holi, I would turn his face red with gulal. When he got engaged, I was the first person to accompany him to a nearby town where his fiancée lived. Such was the friendship we shared.

Every year Ghulam and I would eagerly await the nine-day festival of Navratri to begin so we could play garba or dandiya. It is the time when girls and boys, irrespective of their caste, creed and religion, dance and play dandiya with each other to rhythmic songs synonymous to the tune. The songs are rendered in honour of the Hindu goddess Ambica, but with time the music has undergone radical change as traditional songs are mostly laced with remix these days.

Hence, thanks to our cosmopolitan culture I, like other Indians, have been blessed enough to partake in the company of Christian, Muslim, Sikh and Jain friends.

But today, attempts are being made to sabotage and subvert this cosmopolitan culture, the idea of India, trust, friendship and brotherhood that has been an integral part of our country since time immemorial. Efforts are on to play me off against Ghulam, my brother and sow the seeds of hatred amongst us so that they can reap political benefits. People are being bumped off for merely eating beef, for their belief and the way of their life.

In yet another deplorable diktat, the Vishwa Hindu Parishad (VHP) has barred non-Hindus, including Muslims and Christians from taking part in Garba events in residential societies across Gujarat, in a bid  “to stop incidents of ‘love jihad’, where Muslim boys lure and marry Hindu girls.”

VHP’s volunteers will keep a close watch at the Garba venues across Gujarat to see whether non-Hindus try to enter the venue and those who do and want to enjoy the Garba, will be given an option to ‘embrace Hinduism’ at the venue.

Special ‘racist’ measures will be taken to ensure that no non-Hindu gains an entry into the Garba events. For instance, all the males entering the venue will have to sprinkle Gaumutra (cow urine) on themselves and apply tilak on their forehead. And if a person hesitates, he will not be allowed to go inside.

“We warn all the non-Hindus, be it Muslims or Christians, to refrain from entering the garba venues across the state. Such Hindu festivals are used as a tool by Muslim boys to lure our girls. Such a ban is necessary to stop love jihad incidents,”

“Those Muslims, who want to enjoy Garba can only do so after converting to Hinduism. VHP will make all the arrangements at the venue if he wishes to do so. But, we are sure that no one will show the courage and will eventually drop his plan,” he added.

This reveals the height of racism, discrimination and hatred. We Indians do not even realise how racist we are. Are we going to be like Nazi Germany where Jews were segregated and forced to live in ghettoes?

Are we going to follow the former official policy of South Africa where political, economic and legal discrimination against people who were not whites was rampant?

Such incidents remind me of India’s horrible past when Dalits were barred from entering temples and treated in the most inhuman way.

The truth is that never in my life have I come across a single Indian Muslim who was abusive, cunning or a crook. Indian Muslims are one of the most soft-spoken, humble, well-mannered, honest and hardworking people. The truth is a section of the society is trying to push them against the wall, punishing them for the crimes they never committed.

Why should they be persecuted for the misdeeds committed by some warlords hundreds of years ago?

Why rake up old issues that must be forgotten? This is the 21st century and alas, we seem to be living in the past and by doing so, we are sabotaging our present and the future that, if things continued the way they are, looks ominous to me.

It is a pity that even in the 21st century we have not been able to find a lasting solution to our social issues. All men and women are born equal and they must not be discriminated against along the lines of religion, caste, sex, creed and colour. This is the only way we can save this world from its perdition.

We must reunite the hearts that have been torn apart, for integration, not segregation is the need of the hour. Let there be the kingdom of God, instead of Satan’s in this world. Let there be peace in our words, thoughts and actions.

Besides, those talking of ‘love Jihad’ do not even understand the true meaning and spirit of love and brotherhood that is still sustaining this world amidst all this madness.

Love is a beautiful feeling that happens between two individuals. This is something one cannot plan, for it just happens.

Verily, love does occur during Garba. For I first discovered Sonam (name changed) during one of the Navratri nights, while we were playing dandiya. Oh my God, she was gorgeous. I could not take my eyes off her large gazelle eyes and we knew we were in for something very special.

Did my heart love till now? Forswear it, sight!

For I ne’er saw true beauty till this night.

When I first saw her, I was not aware of her religion and this did not matter to me in the first place. I did not care if she was a Hindu, Muslim, Sikh or Christian. I did not even ask her name. What is in a name?

Later, I came to know that she was a Jain, a pure vegetarian.

Today when Sonam is not in this world anymore, and has left for her heavenly abode, her words still ring in my ears.

During one of our rendezvous at a temple, whilst Sonam was in my arms, she asked me the following question.

“Thou wish to marry me, but how is it going to work out between us? For I am a pure vegetarian and thou, a Punjabi, who cannot live without meat,” she said with a faint smile on her face.

Sonam would often educate me how animals feel pain and just because they cannot express it; we should not take advantage of their vulnerability. Needless to say, I was moved by her words.

“I will do anything to be with thee, my love. Henceforth, I shall shun meat and become a pure vegetarian.”

On hearing this, she burst into peals of laughter and began singing Jagjit’s Singh’s gazal,

At this, my lips, gave her a tender kiss.

“Nay, thou dost not need to quit non-veg for me. Do it only when thou art convinced of its moral righteousness. For now, I accept thee the way thou art, a meat eating Punjabi. You know why?”