A Kashmiri Indian in Pakistan: “It is a magical land of freedom” 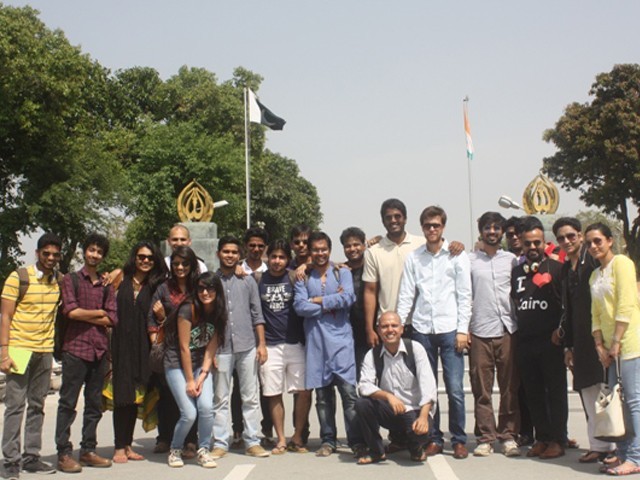 After long documentation procedures and surveillance checks, we had the privilege of walking down the road to Lahore. PHOTO: MOHAMMAD TABISH

It is said we were born twins at the stroke of midnight long ago, when brows were wet with the anticipation of liberation. A 100-year-old subjugation was coming to an end. At the stroke of the midnight hour, when the world slept, we opened our eyes in horror. In a sudden cry, the veil of fantasy fell down to a novel reality of madness and chaos.

Our birth was not a surprise, it was professed by soothsayers of all kind and they knew our fates very well. The umbilical cords got tied and in the darkness of the background, the serpent sang his poisonous lullaby, slowly intoxicating our minds and then disappeared into the velvet of the night.

That was when an era saw its end and the rules of power politics were changing diagrams. Some nations disappeared from the map while new boundaries emerged. Man had become savage. The secret was kept and we were separated, only to mark a cold history of mass bloodshed, rape and plunder and here I am today, contemplating our brutal history a few hundred miles away from my own self.

The sky was spotless and the sun fiercely shone over us while the bus sped with its diesel vigour through the age-old grand trunk road. The road seemed to be endless. Our sweat-sodden bodies headed towards Attari and I was, as usual, going through my poetry fits. Each one of us had fictionalised his own Pakistan and had I not used my amazing power of intuition, I would have never been able to know how all of us were heading towards different destinations. The chatter in the bus revealed that nobody knew anything about Pakistan and everybody knew everything about Pakistan.

Are you raising your eyebrows at this fallacy? Let me explain.

All our lives we’ve been injected with state-centred discourse that dictates that the two countries are very different. We are ‘natural enemies’. Since the ‘beginning of time’, India and Pakistan have existed on polar ends of the world spectrum. Spoonful of national fervour has been painfully swallowed by every Indian before going to sleep. So we thought we knew everything that there is to know about Pakistan.

We couldn’t have been more wrong.

The dying day breathed its last breath and the sky turned into a delicate crimson. Slumber took me and my unconscious mind busied itself manufacturing dreams that were ethereal and green.

I hugged my passport to myself, afraid I would lose it. I would search my pockets in panic. I was haunted by my absent-mindedness. I would always find it in one of my small pockets, just a little dirtier than before. I could not imagine losing this document which allowed me a safe passage under the scrutiny of a vigilant soldier who, for some reason, used to frown a lot.

Should I not tell you my irony, which is only mine, as I am haunted by my Kashmiri identity, where official scrutiny is a monster that follows you around. I take solace in my fair complexion back home because I can be easily mistaken for a foreigner. In my country, white men make no enemies. They are cherished and considered to be clean. They speak fluent English, therefore, I have learnt to shroud myself with crisp yeses, noes and sirs.

After long documentation procedures and surveillance checks, we had the privilege of walking down the road to Lahore. We deliberately chose walking through the borders on foot, drinking its ecstasies sip by sip, and there it was in the shadows of Gandhi and Jinnah, a small piece of barren land which is so ill fated that nobody chose its ownership except Bishan Singh in the obscene mind of Manto, who is not sure who is a better writer, “god or he?”. The no-man’s land and its discrete barrenness, the scar of 1947, the epitome of insanity – I felt like I was walking through the intricacies of history. The delight of entering Pakistan brought no rush in my blood, my hormones were calm and fantasies remained fantasies. It was the same hot day, same people, same piece of land; nothing did change except flags and nationalities. 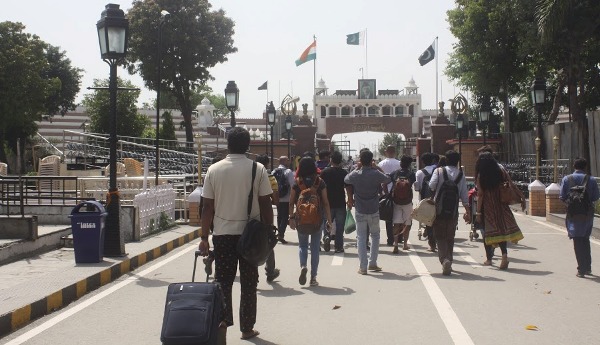 Our Pakistan visit stretched for a whole week. We spent most of our time in Lahore where we were hosted by the Lahore University of Management Sciences (LUMS). It was like meeting our own selves through the looking glass where nothing turned upside down. Lahore has the same climate as Amritsar and Delhi, the people share similar fashions, they prefer listening to Yo Yo Honey Singh and think that Bollywood movies are a delight. They eat like us, yes with their hands and the food is as spicy as it is in Punjab. Our mannerisms are no different, we speak similar dialects and surprisingly, we share common worries of poverty, unemployment and scarce electricity. Both neglect women and both spend huge sums on military.

On our trip, we visited the Badshahi Mosque and I was consumed by its grandeur. Iqbal quietly slept nearby. We left Badshahi Mosque and meandered into the food street. They were archaic structures which have been transformed into restaurants. They used to be brothels where women danced on khyal beat and men rose high in their raptures of the deep. The food mesmerised our appetite, while the surrounding ambiance mellowed down the heat, and in this wildness of pleasure and taste we left the place.

Other places we visited include Baba Farid Dargah at Kasur and Baba Ganj Shakar dargah at Pak Pattan. These were peaceful places, had a spiritual experience in the shadow of those fakirs who aspired for a deeper understanding of religion, of unity of human beings as a whole. They served both good and bad and stole a little goodness from the good and healed the errant. But the earth now holds them in deep meditation, they be the springs of enlightenment and bring people of this subcontinent into a spiritual union. 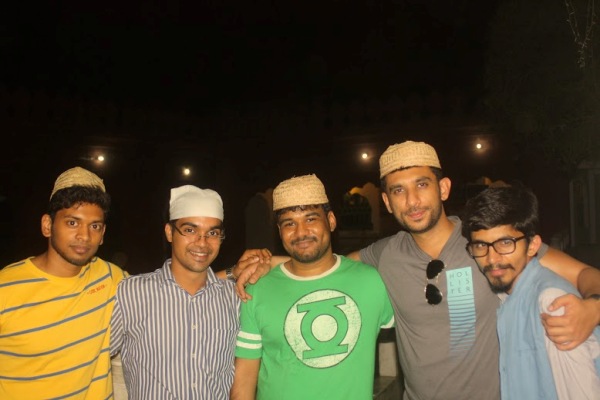 The whole trip was not just a walk through the narrow streets of Lahore; it was more of meeting my own self, my separated half. How easily one could connect to its other fragmented part and it is only our ignorance and lack of tolerance that shape us into two distinct objects. The rapture of Partition and its hidden animosity can only preach hate but it is the responsibility of the people of these two nations to move beyond memories towards reconciliations.

A progression towards Indo-Pak amity does not only forecast economic profits, rather it shall provide us the desired political stability and humanitarianism. I feel it is high time for these two nations to reciprocate friendship rather than ideas, and mellow down in terms of grudges. Borders need to be made transparent; people should start knowing each other by visiting each other. More and more student interactions should be endorsed and recommended so that future generations have a privilege of knowing their neighbours better. War and enmity are the harvest of ill social constructs that root you into ideologies of hate and severe hostilities. Why not share our stories and together we weep in sorrows of the time we lost in fighting each other and also in the joy of a new dawn that is a step away. 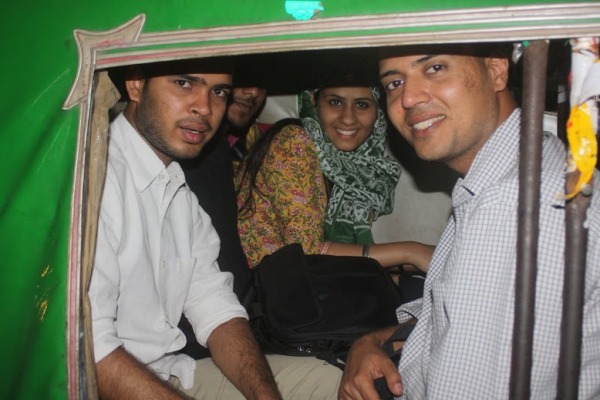 To a Kashmiri Indian, Pakistan is a magical land of freedom, the unseen and highly imagined, midnight fantasy. However, from my various interactions with friends and other people from the Indian sub-continent who find Pakistan to be a hard country, I have come to the conclusion that these beliefs emerge out of certain perceptions and perceptions are second-hand borrowed realities. Narratives alter the mind and courage is required to overcome these forces that lead you astray. I entered Pakistan through a dream channel and while leaving I was able to find myself a new reality that nobody dictated or pushed onto me. It is to be remembered that a country is not a religion. rather it is a union of people and cultures where language and ideologies should not be the barrier for a holy intercourse of peace. In this mix, Kashmir appears to be a miscarriage.

In the words of Rumi,

“Come, come, whoever you are, Wanderer, idolater, worshiper of fire,

Come even though you have broken your vows a thousand times,

Come, and come yet again.

Ours is not a caravan of despair.

Come let us heal each other, Come, let us put an end to these borders.”

The author holds an Honours degree in English Literature. Besides writing freelance for various newspapers, he writes poetry and is currently pursuing Masters of Arts in International Affairs. He tweets as @22_Tabish.