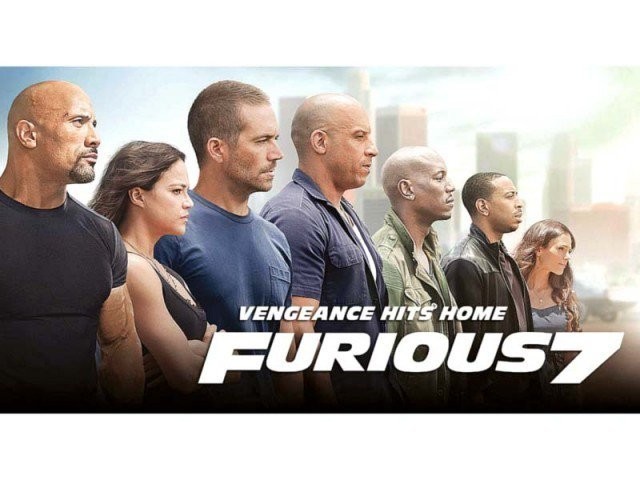 Who knew that Rob Cohen’s The Fast and the Furious (2001) would lead to the creation of a movie franchise that would have seven installments and would earn over millions at the box office?

Recently released Fast and Furious 7, or simply Furious 7, is a sequel to Fast and Furious 6 and has all the major characters from the previous film reprising their roles. Set in Los Angeles, Tokyo, Azerbaijan and Abu Dhabi, Furious 7 takes viewers on an exciting ride through high speed chases, car crashes and one-on-one fights that can leave one glued to the screen.

The ‘last ride’ idea comes from a scene where Dominic Toretto (Vin Diesel) and Brian O’Conner (Paul Walker) are in a garage, planning to take down their enemy. In reply to O’Conner’s question of,

This film was Walker’s last movie as he died in December 2013, while Furious 7 was still filming. His scenes were re-shot and new ones were added using computer graphics and body doubles with his two brothers.

The story of Furious 7 begins where Fast 6’s ends. Owen Shaw (Luke Evans) was captured by Luke Hobbs (Dwayne Johnson), a diplomatic security service agent, along with Toretto’s crew. Shaw’s brother, Deckard Shaw (Jason Statham), ex-special forces operative is seeking vengeance from Hobbs and Toretto, and has already killed Han-Seoul-Oh (Sung Kang) in a scene which appeared during the post-credit scenes of Fast 6.

However, the story takes a turn when a computer program, God’s Eye, is introduced which can track down anyone using digital devices. The hunt for this program, which can locate Shaw, brings Toretto and his gang to Dubai. The movie also introduces Frank Petty (Kurt Russel), a US government operative who is trying to capture Shaw, which brings Toretto and Petty on the same side.

Will Toretto accept Petty’s deal? Will he be able to locate God’s Eye? And how much more damage will Shaw do to Toretto’s team? These are some of the questions which will be answered when you watch the movie. Along with Petty, Furious 7 also introduces a new character, Megan Ramsey (Nathalie Emmanuel), the creator of the God’s Eye.

Furious 7 is similar as well as different from it’s previous installments. It is similar because of the recurring cast, action scenes, and involvement of cars, and it is different because viewers know that they will be watching Diesel and Walker together for the last time.

Furious 7 has all the features of a good action movie. However, when I watched the film, I felt that there was something missing. Hobbs, who was one of the major characters in Fast 5 and Fast 6, didn’t get much camera time because of the excessive action going on between Toretto and Shaw, and also because the focus was to locate a computer program.

Moreover, Diesel’s character seemed lonely as he was seen rendering one-line quotes. The movie also felt different because director James Wan (of Saw and The Conjuring fame) has never worked on a film involving cars, hot pursuits and stunts. It was, therefore, evident, and somewhat annoying, how the camera kept moving in car chases and kept cutting from one character to the other during fight scenes – something which The Fast and the Furious fans are not fond of as in the previous installments the camera followed the action and did not move to and from.

The action, however, is too much to handle and has done justice to the film – especially the scenes where Hobbs and Deckard throw punches at each other, and the scene when Toretto’s crew perform a free fall from a plane in their cars.

At the same time, the comic relief also has a perfect timing as Roman Pierce (Tyrese Gibson) and Tej Parker (Chris Bridges) have created a good on-screen chemistry, which was also seen in Fast 5 and Fast 6.

The movie does have a subtle ending, which includes a monologue from Toretto and a special something related to O’Conner, to bring tears and smiles at the same time. However, the movie will leave viewers with one unanswered question:

“What’s next for Toretto and his crew?”

All in all, Furious 7 is a well-balanced movie with slight hiccups in the story and direction at some points, which can be easily ignored if you focus on the story. The final scene will let you decide if it’s the end of the franchise because we can never remove the possibility for an eighth movie; but, unfortunately, there will be no Paul Walker in it.