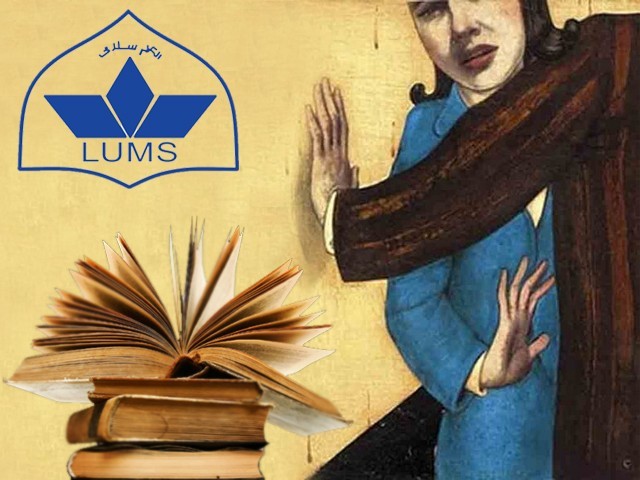 The Federal Ombudsman directed LUMS to fire a teacher from the law department for sexually harassing a student.

A video of a woman walking the streets of New York City, getting hundreds of catcalls from men went viral around the world this week. The woman is followed, called all sorts of names, and her attention is solicited, but none of the men touch her.

In Pakistan, instances of men “inadvertently” touching women are all too common. Girls are taught to ignore it, to avoid creating a ‘scene’. Not only does society silence the woman, our very laws discourage women from reporting cases of violence against them.

Yesterday, news broke out of the Federal Ombudsman directing the Lahore University of Management Sciences (LUMS) to fire a teacher from the law department for allegedly sexually harassing a student. I graduated from this very department a mere two years ago. Upon hearing the news, my reaction was not one of disbelief. I did not wonder, “How could this happen at LUMS?” but rather “which one of them finally got caught”.

Having served in both the student council and the law student council at LUMS, multiple cases of sexual harassment were reported to me by students. All of these girls decided not to pursue their legitimate cases for fear of their reputations being tarnished. They did not want to “create a scene”.

One student was harassed incessantly by an admin staff member; he took her number from a form submitted to the office and constantly texted her.  She did not report him; she did not want to “create a scene”.

Another student caught a worker hired by LUMS pleasuring himself in front of her. She walked away; she did not want to “create a scene”.

One student walked into class wearing a sleeveless top and her professor exclaimed,

“Girls who dress like this, their mothers do not sleep at their homes at night.”

She quietly went to her seat; she did not want to “create a scene”.

However, it would be foolish of you to think that LUMS is the problem. The problem is that we do not have a larger conversation about sexual harassment in the country. LUMS, at least, has a sexual harassment policy in place. Other universities where this is common, these things do not even attract censure to make the news. Students from various government colleges and schools have even held protests about facing harassment at their educational institutions. However, they were not taken seriously.

Schools all over Lahore are bubbling with gossip about teachers and students dating. A prominent school in Lahore caught a theatre teacher and a student crossing the teacher-student relation boundaries on school premises but the incident was brushed under the carpet.

LUMS seeks to serve as a model for schools and universities across the country. In all my interactions with board of trustees at LUMS, I found people like Syed Babar Ali and Mr Abdul Razak Dawood to be visionary people, but they are not involved in the day-to-day happenings at the university.

LUMS prides itself on equality; a large section of the student body comes from the National Outreach Programme (NOP), and there is no visible discrimination based on sex, gender, religion or ethnicity. However, if the people at the top do not hold the culprits responsible, then these principles will stand in name alone.

As the student representative of the disciplinary committee at LUMS, I have observed several proceedings. My conclusion is that the hearings violate all principles of justice; students are assumed guilty and it is their responsibility to prove their innocence. The disciplinary committee has flatly refused in the past to hear of any cases against faculty members. The only time the committee actually acts against faculty members is when a political faction within the university professors wants a professor out.

I could name people involved in flagrant violations of the LUMS policies, and the principles it stands for, but the problem is not LUMS. Despite its flaws, it stands as an institution that at least allows its students to voice their concerns.

However, the appointments in the last five years in key offices risk politicising the university and martialling a restriction of freedom for students but news of sexual harassment at LUMS should open a larger conversation about sexual harassment in the country.

We should not socialise girls in Pakistan to not ‘create a scene’. There are rampant cases of molestations and sexual assaults in Pakistan, which go unreported, even to family members. Women are taught to just live with it but we should tell them to create a scene, to report the perpetrators and seek to bring them to justice.

There is a real need to break the complacency regarding the question of sexual harassment that plagues our society. The educational institutions should be safe havens for girls, every school and university in Pakistan should offer a safe place for them to report cases of sexual harassment.

Let us start encouraging our girls to report it rather than shaming, or blaming, them. Generations have suffered in silence, and I think it is about time we have this conversation. The schools and universities, for one, are a great place to start.