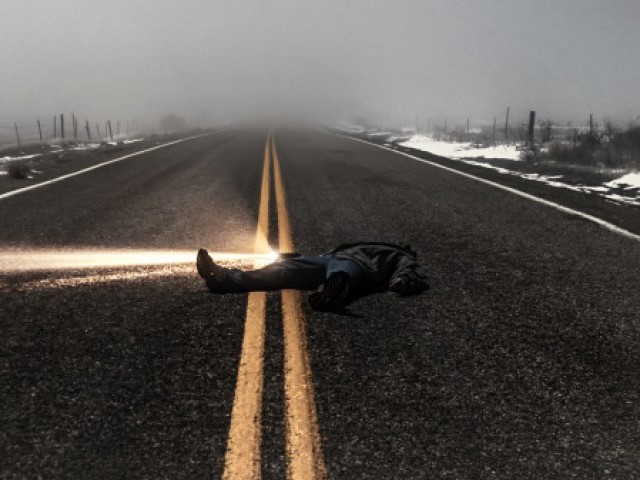 A lanky boy, no more than 18, fumbled and mistakenly shot me. Bloody hell, the idiot did not even realise that I was turning to grab my wallet and phone. PHOTO: GETTY

Shit! The fidgety son of a…

But as my blood rushed out, diluting my consciousness with it, my body involuntarily limped and my selfish soul decided to dissociate itself from the physical pain. My body went numb soon after being shot. My brain decided that this wasn’t real, this cannot be real and my soul, in a final desperate attempt to distinguish itself from the physicality of all this, lurched out and propped up on the bonnet of the car. I needed time and some clarity to assess, digest and make sense of what had just happened.

A lanky boy, no more than 18, fumbled and mistakenly shot me. Bloody hell, the idiot did not even realise that I was turning to grab my wallet and phone. I am a pro at this; I have had my phone snatched a couple of times now.

I am the victim of someone’s nerves.

I have my morning round starting in 30 minutes. I can’t be here. I need to go.

Oh great, look at them, all of them, I am their tea break gossip. Ogling away like I am some under clad voluptuous woman, for God’s sake, you have a middle-aged man, drenched in his own blood, lying in front of you. What are you guys doing, call an ambulance, help me out, and put me back in, damn it.

Here comes the group leader, the alpha male, and my saviour.

Hey, watch it! What the… what are you doing, trying to wring the bullet out of my body. A$%#0!3! I am sure all of my discs are dislocated now. Thanks, idiot!

In that moment, I realised I am not going home alive.

But what about my final moment; the dramatic flashback with a gloomy track in the background?

Frustrated and helpless, I closed my eyes. Abruptly popping them open, I was shocked at what I saw. Scenes which were buried so deep in my subconscious that I had forgotten to actively acknowledge their existence on a daily basis.

Am I happy that I am dying?

I saw a young boy, on the roof top of a school, playing with girls. A boy who they forcefully decided was going to play the ‘husband’ when all I wanted to be was the ‘mom’.

I saw the same boy, a little older now, playing with his sister’s dolls. His commando toy, which came in a fixed hostile pose, married to his sister’s Barbie and their little action figure kids. I saw that young boy mature into an adolescent who liked his cousin and wanted to win his affection. I remember watching him sleep and battling against my impulse to steal a kiss.

It’s been so long now, I can’t really tell.

Then I saw the adult who married to validate his denial, to ward off his demons, once and for all; the man who was stuck in an alien embrace. Their entangled limbs were a lie; a deception which his tangled, convoluted brain could not identify with. The husband who loved his wife, but only in pieces and parts, in moments and for an exhaustible amount of time; not in her entirety, not throughout the day. Not even in her absence and certainly not in his last moments. He was and will always be fond of her. She is his favourite person. A father who, upon hearing the news of his wife’s pregnancy, immediately Googled to see if his terrible secret and his dark twisted conflicts were genetically transmissible.

I am not happy, I tell myself.

I am scared of dying alone.

I have been lonely throughout my life, and at least in death, I deserved some company.

I feel sorry for myself and tears break free.

This can’t happen. My son needs me. My wife’s world is too dichotomous, too straightforward, too simplistic and unburdened. What if my son ever needs anyone, my wife’s happiness is going to suffocate his demons, burying them so deep into his existence that they will become a permanent part of him.

I am slipping and the only way to hell goes through the wretched corridors of my subconscious.

I was too broken for life, anyway.

Not again. I know this too well.

The sand bags of rationalisation are giving away and a gushing wave of guilt is about to take over me. I need to run. I can’t sit in one place. I throw the gun in a bag. Tucking it in my belt is a risk, given my current state of electric nervousness.

I hold the bag and dash out, not responding to any inquiring voices that try interrupting me.

They don’t deserve my attention anymore. I am mad at them, all of them.

I run, blurring the world as it dissolves into nonexistence around me. I want to lose any and all contact with the ground and launch myself into the air. Just the way it happens in a nightmare. I want this to be a nightmare. When I wake up, I want everything to go back to normal.

I want my pale palms again.

I can’t stand the smell they exude now, the metallic smell of blood.

I am too young to be at the heart of this; the guilt, the conflict, the justifications, charges, crime, imprisonment – whatever it will culminate into.

I didn’t plan on killing him. He just so calmly turned to the side. He was older than me. He looked so confident and in charge, like he was snatching something from me.

He snatched my peace, a piece of me. My life now will always be divided in two halves – before and after I killed a man. My past is forever lost, detached from what I will become. I just went there frustrated with life and came back torn, destroyed. It’s like my insides have been scooped out, stomped upon and clumsily placed back in.

I am neither alive nor can I die. These stupid family members that I have to cater for, these associations won’t even let me die in peace.

Saima has to be wedded off; her in laws are demanding a dowry. Her drunkard husband is too immature to take a stand for her and she is high on the concept of undomesticated love. Let’s just wait till she gets married.

Maa is losing her job; her only patient is in the ICU and about to breathe her last. She is too old to be an aya now. Bedridden patients are as heavy as dead bodies. As heavy as he would have become. Shit! Why did I kill him, why? God damn it!

I take my gun out, letting its cool metal jolt me back to my senses.

I can’t die, since Amir is about to. He can’t open his mouth anymore. All the years he spent hanging out with his gutka gang at the cable guy’s place have taken a toll. The doctor said he needs to be evaluated for cancer. My mother can’t bear to lose both her sons, especially me, because I earn comparatively better.

My shift, as an elevator boy, starts in an hour. I should go. As I slide my gun back, a nagging thought invades my newly developed sadistic, punitive space again. He was somebody’s son too, maybe even somebody’s father. I tore apart a family, just like mine was torn apart when that woman walked into our world and left with our father.

My fingers involuntarily clench around the gun, and in an impulsive reflex, I place it against my forehead. My finger tremble and…