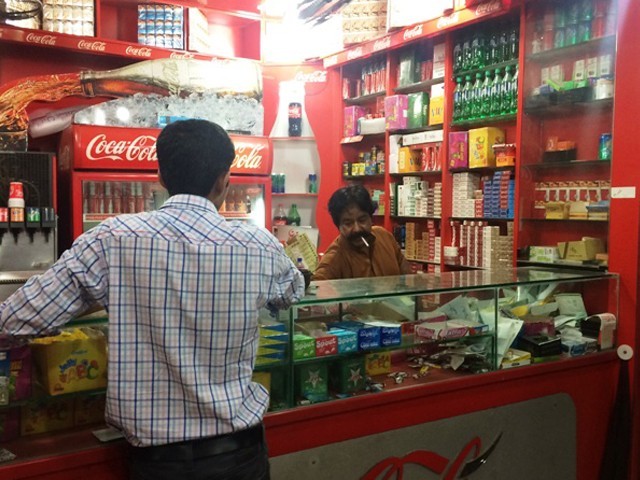 Someone taught me and I just learnt. Soon I was an expert. People loved the paans I made. PHOTO: ABU BAKR AGHA

The streets of Islamabad are filled with an extremely diverse collection of people. There are people on the street who can’t afford a meal, but on the very same street you could find a multi-millionaire. Politicians can be spotted in hotels and local cafes, and so can journalists who, in Pakistan, are as popular as any celebrity.

In terms of progress as a country, Pakistan has been on a downward spiral for most part of the last two decades. A lot of people point fingers at political leaders, military dictators and even religious ‘scholars’ but many believe that this is also because of a moral collapse in the public. This opinion is well supported and it can’t be denied that parts of society seem to have lost their sense of humanity.

There are, however, people living amongst us who represent, what I believe are the, proper values that define a Pakistani. People whose stories need to be shared so we don’t forget that there is still hope for society. Every social group has the wicked and the brilliant, and I think in times of trouble it is important to keep track of the latter to remind us that we have heroes amongst us and the possibility to produce more.

One such story is that of Muhammad Masroor Khan, who everyone in Islamabad knows as the ‘Paan Corner guy with a distinctive moustache’. I have no memories of Islamabad without Mr Khan. Paan Corner opened in 1980, 10 years before I was born. 34 years later, it is now a landmark of the city that virtually every soul living here has visited. This is because of Khan’s unique paans. People from all over town travel to his shop because the paans, made by him personally, are deliciously distinctive.

Khan is, therefore, also an individual that everyone in this city recognises. His face is as indistinguishable as anybody in the capital city; it was about 20 years later that I was, finally, able identify his face. That too would probably never have happened if my father wasn’t so fond of making conversation with him.

A couple of days ago, after visiting Paan Corner, my dad came back with an inspired look on his face and said that the ‘Paan Corner guy’ was travelling to the United Kingdom next week for his daughter’s graduation. Upon hearing this, I was surprised and figured his story was one worth sharing.

When I requested an interview, Mr Khan happily obliged and invited me to his house where we talked over a late lunch. I wasn’t planning on having a meal with him since I had already eaten lunch before leaving for the interview. But he, and his two brothers who were present for lunch, insisted that my friend and I have a little something to eat. Everyone ate together on the floor; my friend, Mr Khan, his two younger brothers, his sons, workers of the house, staff from his shop and I all sat together and he started telling me about himself.

Khan was born on January 1, 1957 in Karachi and is the eldest in a family of four brothers and two sisters. His father was the chief of protocol in the Economic Affairs Division and his mother was a housewife. Khan passed his Matric exams in 1976 from a government school in F6/2, Islamabad and got a bachelor’s degree in 1980 from Margalla College. He went on to say,

“Everyone in my family has a Master’s degree at the least. I’m the only dumb one.”

After graduating from college in 1980, he inaugurated the paan shop with a partner in Jinnah Super Market. He said,

“The market was nearly barren when we started. I was the fourth shopkeeper there. My partner and I thought it would be a good idea to open up a store for cold drinks, cigarettes and paan. A unit in the market at that time wasn’t even for Rs300, 000. Today, they are sold for 20 crores.”

I then asked him how he learnt to make paan; after all, his paan is the reason behind his fame and success. All he said was,

“Someone taught me and I just learnt. Soon I was an expert. People loved the paans I made. Word got around and I personally made paans for former President Pervez Musharraf, the late Benazir Bhutto and current Prime Minister, Nawaz Sharif.”

The profit from Paan Corner is Khan’s sole source of income and the means he used to educate his son and four daughters. With the exception of his youngest daughter, who is just 19, all of Khan’s children now have a Master’s degree. His eldest daughter, Shafaq Masroor Khan, got her Master’s degree in 2005 and is now graduating from the University of Sunderland with a second Master’s degree, for which Khan and his wife will be travelling to the UK. Shafaq is also starting a three year long Chartered Accountancy programme from the Chartered Institute of Management Accountants (CIMA).

I asked him how he managed to make all this happen just by just working at the Paan Corner and his reply humbled me,

“Mehnut. My goal in life was to enable my children to stand on their own feet and education is vital for this. Every human being should be educated. It is essential for their mental growth and for them to have a sense of self. Everyone, man or woman, should be educated and have a means to live.

I worked every day from 10am to 2am, making paans with my own two hands. During Musharraf’s government, I would sometimes get paan orders for their functions. I would prepare close to 500 paans and send them out just for these events.”

Khan believes that the foundation of his success is based on the fact that he worked hard. I asked him if he ever lost faith when things weren’t going as planned, he shook his head and replied,

“There are ups and downs in every business. I’ve always had faith in God and I was sure from the first day that all I needed to do was work hard. I didn’t doubt I would make it, not even for a second. I never imagined I would be making paans or working at a paan shop. I didn’t know anything about paans. But that’s what happened. You should dream big and have good intentions, and you’ll see that everything somehow conspires to help you succeed.”

He insisted that all he needs in life is his family, seeing them happy and the house that he’s renting.

“I’ve never owned a home. I don’t need to. I’ve rented this place and it’s a roof over my head. I’ve been blessed with grandchildren now too. I have all I need.”

Even his brothers spoke highly of him. According to them, they have never seen or heard him speak ill of anyone and that he would treat everyone with love and equality. They recalled an incident of a gentleman who showed up at Paan Corner intoxicated. He started shouting derogatory remarks towards Khan. They said, with a person who looked like their brother, with that moustache and staff, one would expect them to teach this guy a lesson. But instead, all Khan did was make him a paan and asked if he wanted anything else. Soon enough, the gentleman just turned around and left the store.

“Revenge is pointless. It’s the problem with the world. If someone does something bad to you, you don’t have to reciprocate it. Try to fight hate with love and you’ll notice that the problem stops. Otherwise, it’s an endless cycle…”

“Bhai saab never expresses sorrow either. We’ve never seen him sad; he is always cheerful. Even when things get ugly, he’ll ease up and give himself time to think but he will never be sad or upset about, and won’t complain about it. I’ve never heard him complaining about anything. All he does is work hard and everything just falls into place.”

After my four hours of conversation with him and his family members, I found Mr Khan to be a humble, kind, honest and an incredibly genuine human being. The things he believed in most were love, humanity, faith and education. If a person can invite a stranger into his home and treat them like esteemed guests, then that says a lot about the person.

He is a completely self-made man who’s determination, hard work and most importantly, superior thinking separates him from other people. He treated me, a person who he met for the first time, like his own son. Such kindness and hospitality with attributes of charity and hard work are what, in my opinion, describes a true Pakistani.

I believe there is a Masroor Khan in every corner of Pakistan. Some people just need to be given a chance to prove themselves. Instead of giving up on people upon the first glance, we need to empower them, enable them. All we, the people of Pakistan, need are the right circumstances, and people like Khan have proven that hard work will take you leaps and bounds.

One of Khan’s favourite quotes was by Hazrat Ali (RA) and he quoted him quite often saying,

As I was leaving his house, his brother asked me if I wanted to know the craziest thing about him. Curious, I said,

He smiled and said,

“He’s never tasted a paan in his life.”