The failure of the police system in Pakistan 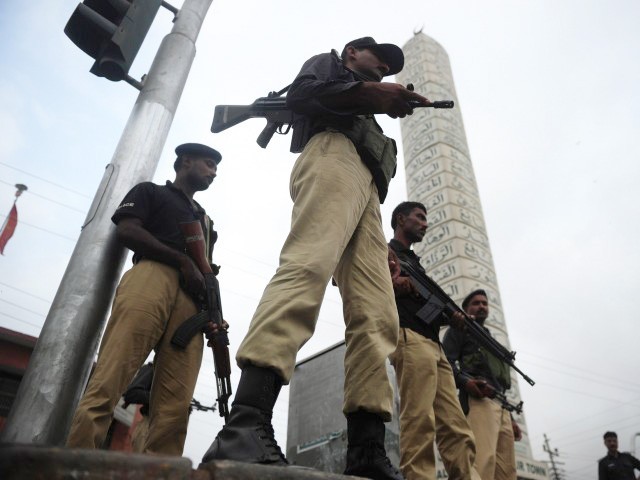 We see everyday how flagrantly laws are violated, how police officials become parties in criminal cases, how they misbehave with the general public and how they fail in controlling the law and order situation in the country. PHOTO: AFP/FILE

A few days back, while coming to work along with my husband and brother, I was stopped at a check post by the Islamabad Police. One of the police officials on duty inquired from my husband about the three of us. My husband stated that he and my brother were going to drop me to my office.

The police official turned towards me, raised his eye brows and, while pointing towards my brother, asked rudely,

(He is my brother)

To which the police official responded, sarcastically,

(What do you mean he doesn’t look like it?)

The tone of the police official stung me and I felt thoroughly humiliated and degraded. I wondered why a public functionary, who was supposed to be courteous to the people, insulted me for absolutely nothing. The police official kept us waiting at the picket for no reason. Finally, when I told him that I was working for the Supreme Court, his attitude changed immediately and he allowed us to pass through, all the while apologising profusely.

Upon reaching office, I searched for the Police Order 2002 and the perusal of same revealed to me that there was a specific section with the caption “Attitude and responsibilities of police towards the public”. The said section provided that:

“It shall be the duty of every police officer to –

(a) Behave with the members of the public with due decorum and courtesy;

(c) Guide and assist members of the public, particularly the poor, disabled or physically weak and children who are either lost or find themselves helpless on the streets or other public places; and

(d) Aid individuals who are in danger of physical harm, particularly women and children”.

The police department in Pakistan is as old as the inception of the country itself. Currently, the system is based on the Police Order 2002, which was promulgated during the period of former president Pervez Musharraf in order to improve the performance of the department.

Law is dynamic and it changes its course with the changing needs of the society. It is unfortunate that the post-colonial Police Rules 1934 and the police structure inherited by Pakistan from British legacy didn’t undergo any major amendments, alterations or reformation. Similarly, the Police Order enforced in 2002 didn’t bring many structural or institutional changes in the old setup as postulated under the Police Act of 1861.

In this age of technology and advancement, what can we expect from police officials whose services are still regulated under obsolete rules of 1934?

Every day we see how flagrantly laws are violated, how police officials become parties in criminal cases, how they misbehave with the general public and how they fail in controlling the law and order situation in the country. The failure of the police system in Pakistan is apparent in everyday life, where people have no guarantee of their fundamental rights to life and/or property.

The department’s structure, based on the prevalent Police Service Rules, has sufficient room for political and executive influence and manipulations. The culture of intolerance, hatred, sectarianism and anarchy in Pakistan is at its zenith, and the same can be seen reflecting in our police.

Where we are lacking and wherein lies the solution?

There is no doubt that better and updated laws shape a better society that is based on norms of justice and fair play. It is the need of the hour that the police system should be revamped and replaced with a well-organised legal and institutional setup based inter-alia on rules of transparency, accountability, efficiency, ethics, merit-based appointments, compulsory legal education, evidence-based policing, acquaintance with information technology, latest arms and ammunition, and compulsory per-service and post-service trainings at all levels.

Corresponding amendments should be made in the substantive and procedural laws of the criminal justice systems. It is high time that the legislature takes up its responsibility to restructure, reconstitute and reform the system of our police. This reformation will cure much of the social ills rampant in Pakistan today.

A researcher at the Supreme Court who is also a former civil judge. She is currently doing her PhD in Law from International Islamic University Islamabad. She tweets as @saimasyeda (twitter.com/saimasyeda)