Do you have the ‘Naik Perveen Syndrome’? 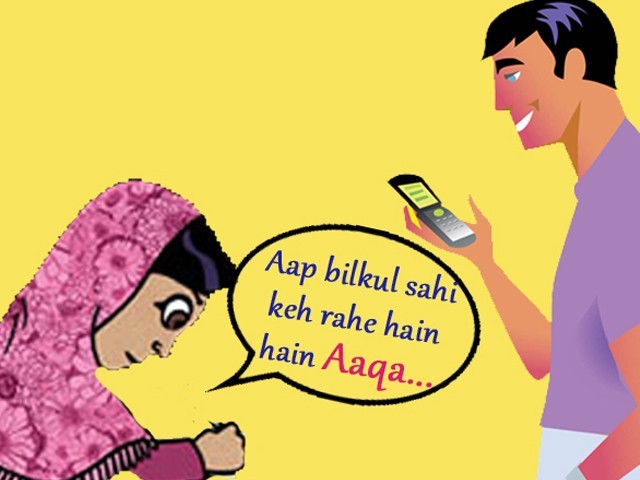 My list of friends on Facebook has increased quite dramatically since I got married. I am ‘added as a friend’ on a constant basis by most of the married women I have ever interacted with in my ‘youth’ or pre-marital days. But sadly or gladly, this drama isn’t one with a happy ending.

It is sweet of them to count me in as a new member of the ‘married club’; all of them believe to be a part of the ‘my-married-life-fan-club’.

My timeline has also dramatically shifted from ‘political’ posts to random quotes shared by the ‘Islamic Wife Club’, ‘I Love My Husband’, ‘Best Honeymoon Ever’ and the like. I have to admit that my new friends did seem interesting in the beginning as the stalker side of my personality enjoyed scrolling down the wedding pictures of these ‘hubby-loving’ damsels. It was amusing to see their display pictures being updated on a weekly basis as their yellow gota-covered dupattas and henna-dyed hands made way for ruby red ghararas (bridal dress) and maatha pattis (bridal head adornments).

But as time passed, the pictures, posts and statuses began to appear stale and overdone. The ‘happy pages’ made it seem like these newly wedded wives only found happiness in washing their beloved hubby’s socks and cooking his meals. It’s as if they could not be publically acknowledged to be ‘happily married’ otherwise. Their habit of sharing silly jokes quoting their dumb miyan (husbands) every now and then made my eyes water – sometimes with joy but more often in anguish.

So, today I finally decided not to keep my mouth shut.

Here I stand at my dressing table (imagining it to be a rostrum) to bring to you how miserably many of these women ‘honoured’ to be married actually suffer from a ghastly disease which I call the ‘Delusional Wife Syndrome’.

For better understanding, I have divided the symptoms of this god-forsaken illness into categories or clusters:

You know that a newly wedded wife belongs to this category if you see any of the following symptoms:

a. Immediate change of marital status from ‘single’ to ‘married’. If it were up to her, she’d start a petition to get an official ‘Happily married: OMG Best Hubby Evah’ status.

b. Instant name change. She takes on the husband’s name even before her khala had the chance to give her the rib-breaking congratulatory hug.

c. Changing the cover photo on Facebook. Have you seen a bride’s mehndi-laden hands ‘oh-so-seductively’ touching hairy hands… wait, it gets better (or worse) … with a sunset in the middle?

You have? Definite delusional wife syndrome.

d. Self-obsessed selfies. I sometimes have to scroll down really fast to avoid looking at these awkward and unawkward selfies of these newly wedded wives who tag ‘hubby dear’ in each one.

e. The ‘mashallah’ profile picture. As if the wife’s caption of ‘mashallah’ was not unoriginal enough, everyone who comments says the same too. Are people at a loss for adjectives?

f. Sharing/liking and posting sickly sweet groups and images. You know what I mean – groups like ‘I love my husband’, ‘Happy housewives’ and so forth, and images with captions such as ‘Like if you love your husband’. As if this will increase the amount of oestrogen you dedicate to his armpit hair.

g. Regular check-ins. At the beach, the hotel, the bedroom and the midnight birthday surprise with a heart-shaped cupcake. I mean, do these people pay as much attention to their surroundings as they do to their check-ins?

And then, there are some wives who will judge you for everything. Everything that goes wrong in your marriage is your fault; the husband is never to blame. If he does something bad, you asked for it. It’s as simple as that. Some symptoms of this cluster include:

a. She judges anyone who doesn’t have the picture perfect marriage that she thinks she has, no matter how delusional it may be.

b. She thinks any wife who shares her marital problems has something wrong with her and that the said wife needs to work harder to sustain her marriage. The husband is obviously perfect.

c. She thinks any wife who talks about how her husband is cheating on her has done something to force him to do so and hence, must act immediately to correct the situation. Every single divorce in the world happened because of the wife’s inability to compromise. This lack of compromise could be over something as trivial as the salt content in an aloo ka paratha.

Wives in this cluster are perhaps, the most nauseatingly annoying ones. Some of their symptoms include:

a. The husband is always right… always. After all, he is the mijazi khuda. If he sulks in front of the wife’s family, she will invariably berate her own mom and ask her to be nicer to him next time.

b. When he comes home, she will drop everything and fetch him piping hot tea (even if she has just entered the house herself after a hard day’s work).

d. She finds her husband to be the funniest man in the world above and below the ground. How many times have you heard the exaggerated,

(You know… he is soooooo funny!)

f. She can even break up with her best friend only because she seemed jealous of her seemingly happy life.

a. She forgets her first name and even gets herself registered in the cooking class as Mrs Miyan (Mrs Husband).

b. When he goes to work, she spends twenty minutes pining over the pajamas he’s left on the floor.

c. When he says he has a headache, she immediately forgets she’s been working like a dog all day and starts massaging his stubby feet.

d. When he criticises the food she painstakingly cooked, she chastises and reminds herself that he only wants the best for her.

After you have identified the cluster you fall in, do check the risk factors. Aah… not interested? Why am I not surprised? Singing Om Shanti Om while swaying in his arms in the woods might seem like a fruitier option than gobbling these horrific risks down. But do you have another option?

Although it is true that this world needs more laughter than sorrows but are you willing to be the source of that laughter by being the laughing stock in your group of friends?

I know what your next argument will be. Firstly, you don’t care what other people think (contrary to your regularly updated Facebook statuses) secondly, you are happy to be a ‘role model’ for those who are not so accomplished at being the ‘perfect wives’. And thirdly, you’d rather have people laugh at your antics and gain some happiness in this sad world since you know what you’re doing is right.

But I would urge you to think otherwise. Your symptoms provide a good laugh to the one who do not have the ‘Best Hubbies Evah’ and while scolding every beautiful damsel who doesn’t dust her husband’s palace ‘properly’ may give you a sense of pride, it will all blow up in your face one day (as all bubbles do).

I write this only as your friend and advisor. Kindly take heed or else, don’t mind pages like ‘Naik Parveen Syndrome’ posting your wedding photos on Facebook, giving all the ‘sad’ members of humanity a good reason to laugh!