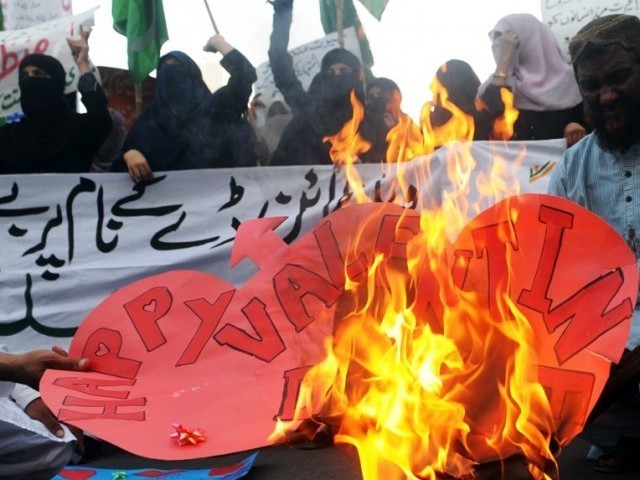 One would hope the government would notice this trend and intervene before the ideological fight turns to actual violence. PHOTO: AFP

There is no better indicator to how little Pakistan has done to prevent the nation slipping down the extremism rabbit hole than the increasingly visible outcry against Valentine’s day.

Back in the 90s, nobody was concerned with the celebration of Valentine’s day. The general population was unaware of the event, and the few who knew went their merry way with chocolates, cut-out hearts, red balloons and the hope of securing a date or making a loved one feel special.

The 2000s have, however seen each Valentine’s day turn increasingly into an ideological battleground between the forces of extremism out to score political mileage, and well, teenagers with red balloons. One would hope the government would notice this trend and intervene before the ideological fight turns to actual violence, but perhaps such foresight would be expecting too much.

So here we are in 2013 with these big billboards up across Karachi:

Say NO to Valentine’s Day!

“If you do not have haya in you, you are free to do whatever you like”

This tradition reflects our insensitivity indignity and ignorance of Islam.

Who is this group willing to spend tens of thousands of rupees per billboard?

They are the Tanzeem-e-Islami – a splinter group of the Jamaat-e-Islami who state on their website that their basic belief are “the same as that of Ahl-e-Sunnat wal Jamaat” and:

“Since Tanzeem-e-Islami addresses specifically to the duty of struggling for the establishment of the Deen, it believes that the Western constitutional and democratic model is not suitable for this purpose.”

At this point, any readers who feel democracy is ‘cr*p’ may exit stage left.

For everyone else, we need to realise that Valentine’s day is no longer a pop-culture/globalisation phenomenon – it is now a political statement.

I personally do not like Valentine’s day. I think it is gaudy, commercial and just plain silly at times. But I am willing to fight for the right our nation’s hormonal teenagers and sappy romantics have to celebrate it. You should do the same, because an ideological war is being fought here, and while you may personally detest Valentine’s day, please realise that the endgame of extremist outfits like the Tanzeem-e-Islami is not to bring an end to Valentine’s day, but to democracy and any/all of the (few) freedoms you currently take for granted.

Take a look at the ‘methodology‘ section of the Tanzeem-e-Islami website if you are having trouble visualising the ‘change’ this organisation wishes to bring.

So have a heart (literally). Celebrate Valentine’s day in some small visual manner this year to establish where you stand politically. If you don’t do this for yourself, do it for the minority out there who consider this day important.

At the very least, when you are bashing Valentine’s day, just be extra careful with the words you use so as to not end up being a part of a very real movement aimed at taking Pakistan down a truly dark path.

PS: I do not think the solution to this problem is the removal of such billboards, as that would be limiting free speech. I do believe the answer to this is a communicated response, and a level playing field whereby violence and threats in the name of religion are not used by those with another world view to enforce what they want.

Correction: An earlier version of this post stated that the English translation from Bukhari in the billboard was not found. It was identified by commenters in an Urdu translation.