How much do you hate Pakistan’s media? 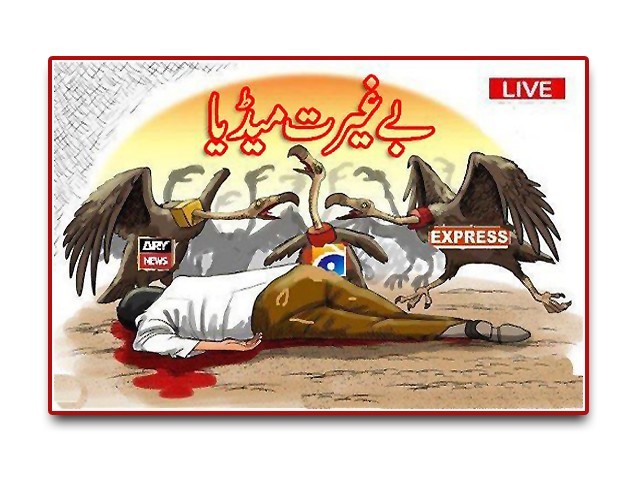 An image that appears on multiple Facebook pages targeting the Pakistani media.

Keeping lists of all aspects of Pakistani activity on Facebook is a manic hobby of mine. I consider myself the tracker of the totality of our online diaspora, which is best represented on Facebook (8 million Pakistanis and growing fast).

Over the last two years I have been diligently adding pages that spew hate (i.e. irrational, cherry-picked critique with dollops of venom, lies, incitement to violence and racism) against the local media. I have also tried to decipher where these pages are coming from, ideologically and literally i.e. who is running them and possibly funding their activity.

I could venture to speculate from the above-mentioned facts, but I won’t. I will leave the speculation to the readers, and all the evidence is easily available on Facebook anyway.

Let’s take a look at some of the ideological fronts these pages act on. In particular, let’s see why they hate local media so much!

This is probably the most popular theme on all the Facebook page – a firm belief that Pakistan’s media is sold out to foreign powers or the highest bidder.

[NOTE: I have tried to avoid images targeting a single media group, and have not included many vile, racist, obscene attacks on individual members of the media]

[Translation for the image above: Under this flag’s shadow, we are one, we are one.]

[Translation for the image above: Everything is sold here.]

The Facebook pages tend to take any ongoing current event and twist it to fit their anti-media agenda. Take a look at a few examples after the January 2013 Quetta attacks below.

[Translation for the image above: If Balochistan is handed over to the Army, the first thing which should be done is to cage this treacherous media. For whenever the Army tried to sabotage terrorists through, the media defamed it by giving it the name of ‘military offensives’.]

[Translation for the image above: Pakistani media! For many years in the past you have been blaming the Army for the unrest in Balochistan. So why are you demanding Governor rule and deployment of Army personnel in the province today? Such  shameless and treacherous media organisations you are.]

These pages were also a part of the propaganda campaign that tried to portray violence in Burma against the Rohingya Muslims using images from other disasters.

With a slightly different twist, these pages called out the media for not speaking out on the issue.

[Translation of the image above: Send your curses to to the conscience-less, sold and Jewish media which stayed mum over the killings of 28,000 Muslims in Burma.]

Here is another example of shares after the shooting of Malala Yousufzai.

Note how unlike the majority of propaganda circulating against Malala online, these groups focused on lauding the Army and bashing the media (rather than calling Malala a CIA agent, scam artist etc.)

[Translation for the image above: Salute to the Pakistan Army! And curses to the media dogs who bark against the Army. But, like always, the Pakistan Army proved that it’s always ready to serve the people, while the dog kept barking.]

A more general complaint is that local media is hell-bent on destroying society by attacking its values, its figureheads, its traditions etc.

[Translation for the image above: The day when the whole nation was paying tributes to Quaid-e-Azam, The Express Tribune was trying to create confusion regarding him. Who actually was Quaid-e-Azam, learn from his own words.]

[Translation for the image above: The above channels, showing vulgar Indian dramas, are not aired in parts of Pakistan. If you are still receiving these channels, then you can call your cable operator to stop their reception. To raise your voice against vulgarity is your moral and social responsibility!]

[Translation for the image above: Everyone beats drums on death anniversaries of Indian actors Dilip Kumar and Dev Anand, but which channel mentioned anything about the death anniversary of Hafeez Jalandhari?]

The image selection above is not a complete representation of the content on the Facebook pages on my media hate list. They also feature many graphic, personal attacks on media group owners, journalists, politicians and TV anchors. These attacks sometimes include incitement to violence. Additionally, there is a lot of racist content targeting Jews in particular, and a fair amount of religious extremism in many posts.

Examining the content of the pages, it is clear that there is a sustained hate campaign being run (manufactured?) against local media. There is very little emphasis on actual critique, much less truth telling and integrity.

The twisted nature of this undertaking and the fact that it attracts a crowd (albeit a select one) makes these pages (and their owners/operators) ironically just like the nightmare local media they envision and despise.

But what else could we expect? The media as an institution is after all, a mirror of the society it is operating in.

Pakistan media – The fifth column of the enemy

Geo is a Jew Tv

Say NO to Indian Culture

My Ideology is Islam & My Identity is Pakistan