A fantastic dive into the deep blue sea 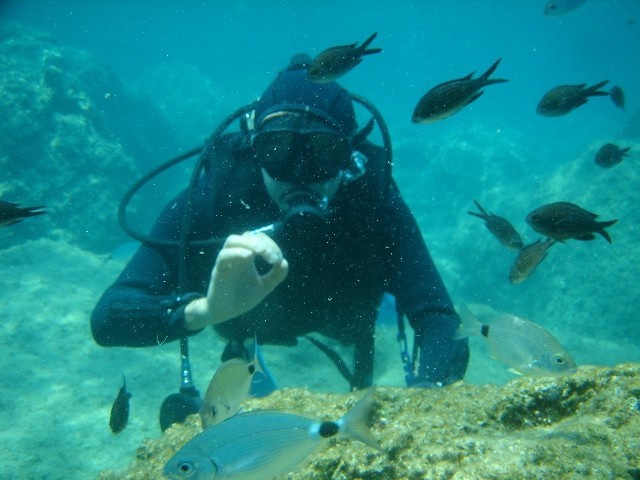 Fish traveling in shoals moved so close to me that I could touch them with my hands.

A few weeks ago, my cousin asked me to accompany him on a scuba diving trip to Mubarak village, a place just outside Karachi. I was excited by the prospect and agreed in an instant, so he picked me up before sunrise. When we reached the village, we took a boat ride to Charna Island for the dive.

We were accompanied by a team of professionals who briefed us before the dive. I was surprised to learn that one can enjoy the experience of scuba diving without knowing how to swim. After a few other important instructions regarding underwater communication signals, we were all set to go.

As dramatic as it may sound, I was the first one the instructors called for the dive in the sea – plunging into deep the sea. The idea shook me to the core and made me wonder if I was mad to have agreed to come here. But my male ego kept me from expressing my inhibitions. I stood still as the caretakers prepared me with the diving kit and wet suit, which consists of a mask and an oxygen kit that goes into your mouth for breathing –  a simple mechanism. I was told not to worry about the fancy gadgets as the caretaker would take care of all that.

The moment they told me that I was about to be rolled into the water, my heart started beating wildly. On the count of three, I was falling on my back, holding my mask, looking at the sky and splash!

My eyes were closed and I was underwater. I was overwhelmed by the fear of the unknown.

There was a moment of panic during which I couldn’t breathe properly, but the instructor soon fixed my kit. He kept me on the surface for a while after that so I could regain my confidence. Soon, the curiosity to discover the underwater world overcame my fear and I signalled him in the affirmative when he asked if I wanted to go in deeper.

The moment I dipped my head in, I congratulated myself for my courage.

The scenes under the water were breath taking.

The refraction of light and green vision, startling at first, soon started to look spectacular. My gaze began to wander as far out as it could, trying to grasp the entire beauty of the scene all at once. Fish traveling in shoals moved so close to me that I could touch them with my hands.

I forgot that I was standing 50 feet below sea level. I couldn’t believe I was standing on my feet, so far below. There was a kind of silence that words can’t explain, a sense of total tranquillity and peace. I lost track of time, forgot that I didn’t belong there. I was in a trance.

I came back to my senses when the instructor said we had to go back to the surface. He was surprised when I refused. After a few moments, he asked me again and despite my refusal he made me surface up with the help of gauges he was controlling. As soon as my head hit the surface, I yelled:  “I want to do this again!”

No other words could best sum up my feelings at the time of my first scuba diving experience.

Watch this clip from Zindagi Na Mile Gi Dobara and do try it!

Learn about how you can go scuba-diving here.

An engineering graduate who works in the telecommunication industry. He tweets @intrepidparadox and blogs at absarulhasan.wordpress.com

Shia killing: If we tolerate this, our children will be next