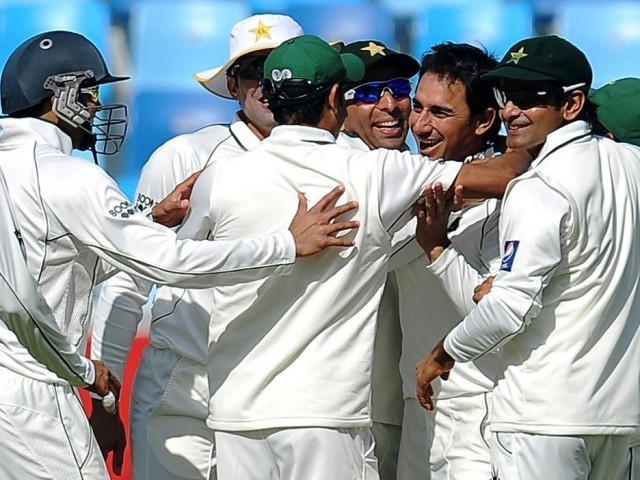 Rumours have it that if England lose the first Test in Dubai, Ajmal's action might come under an even sterner media examination. PHOTO: AFP

As every doosra and teesra out of Saeed Ajmal’s hand passed the incapable strokes of perplexed Englishmen, the smell of a potential controversy got stronger with every wicket in the fully packed media center of an otherwise empty cricket stadium in Dubai.

Staying completely loyal to their predecessors, the British journalists and media men triggered another controversy by questioning the bowling action of Pakistan’s new Spin King, and the wisdom behind his selection of attire that consisted of a full sleeved T-Shirt. Rumors have it that if England lose the first Test in Dubai, Ajmal’s action might come under an even sterner media examination.

This, however, is nothing new when it comes to Pakistan versus England encounters. Here’s a look at some of the major controversies that have plagued the relationship of these two cricketing giants over the past decades.

Ian Botham was never shy of openly expressing his views and, naturally, controversies always dogged him both on and off the cricket field. In 1983, after being forced to fly back home from Pakistan during the Test Series between Pakistan and England, Botham’s views once again sparked controversy.

“….the kind of place to send your mother-in-law for a month, all expenses paid”

This is how he described Pakistan, for which he eventually had to apologise. Less than a decade later Botham ate his words when a certain Wasim Akram got rid of him for a duck in the World Cup 92 final and Amir Sohail asked him:

“Who’s coming in next? Your mother-in-law?”

Being 1-0 down in their away Test Series against Pakistan in 1987, an under pressure England captain Mike Gatting got himself involved in a high profile drama, with Pakistani Umpire Shakoor Rana, that almost got the tour cancelled.

In a bizarre turn of events, umpire Shakoor Rana called Mike Gatting “a f***ing” cheat on his insistence to move his fielders during the bowler’s run up. Gatting returned the favour in an equally fearsome manner and his finger wagging picture while shouting at Shakoor Rana made headlines worldwide. Shakoor Rana demanded an official apology and halted play until then. Finally, after losing the whole third day of play and government intervention of the highest level, the series continued towards its logical conclusion.

By 1992, Wasim Akram and Waqar Younis used to bowl reverse swing as a hobby. The Englishmen, however, found it hard to digest. As processions of English batsmen started making their way back to the pavilion, the English media waged a war on the legendary Pakistani Swing Kings that has never really settled since. Wasim and Waqar, along with other Pakistani players, were at the centre of ball tampering accusations from the English media and players. England’s case, however, was rubbished off by their own batting legend Sir Geoffrey Boycott when he termed English batsmen as incapable and that Pakistani bowlers would get them out even if they bowled with oranges!

When Pakistan collapsed in the third innings of the Karachi Test against England, they were in danger of losing a Test match at the National Stadium for the first time in 39 years. The Pakistani captain, Moin Khan, was in no mood to get his name in the record books for the wrong reasons and tried every tactic to slow down the game to an eventual draw. Umpire Steve Bucknor, however, ruined Moin’s plans and allowed play to go on in near darkness as England secured one of their most famous wins.

Being the innocent guy he is, Afridi usually finds unique ways of serving his team. On this occasion, assuming considerable lack of attention from his surroundings, Afridi decided to try a few dance moves on the cricket pitch. The cameras, however, were watching and so was Kevin Pieterson. Afridi got penalized for his innocence and Pakistan’s image suffered a further dent.

Not many thought that a man as laid back as Inzimam-ul-Haq would be at the centre of cricket’s first forfeited Test match in 129 years. When Umpire Darrell Hair accused team Pakistan of ball tampering and awarded five penalty runs to England, Pakistan Captain Inzimam-ul-Haq protested without much success. However, when the teams went for the tea break, few predicted what was to follow. In a completely unexpected turn of events, Inzi along with the rest of the Pakistan team, refused to come back to the field in protest against the ball tampering charges. Umpires Billy Doctrove and Darrell Hair waited for a while and then awarded the match to England, the fist such instance in 129 years.

Very rarely has the world seen talents such as Amir and Asif together on the cricket field. It’s a pity, however, that they will never be seen together again. When Amir and Asif overstepped while bowling with inconceivably large margins under the supervision of their leader in crime Salman Butt, Pakistan cricket fell into the dirtiest sporting controversy in its history. The three cricketers were eventually banned and later convicted of criminal charges in the UK and are now serving their sentences behind bars.

To view the original version of this blog, click here.