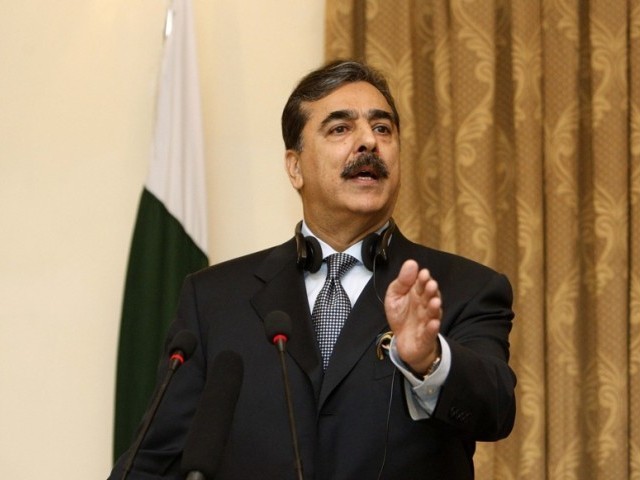 The Supreme Court’s wrath is now falling on the shoulders of none other than the prime minister. PHOTO: REUTERS

Make no mistake, this is a Supreme Court crusade to recover ill gotten wealth. Doing so successfully has become its pride and joy. The bewildering list of instantly recognisable acronyms in cases involving financial misdeeds ( NICL, BoP, PSM, RPP) bears testimony to the fruits of such efforts. Given these circumstances, the government’s continuous attempt to frustrate such efforts by evading the implementation of the NRO judgement was never going to bode well with the Supreme Court.

The Supreme Court has waited over two years for the implementation of the NRO judgement. Unfortunately however – if I may take out a leaf from Babar Awan’s impressive and evidently bulging book of poetry – abused patience turns to fury. The Supreme Court’s wrath is now falling on the shoulders of none other than the prime minister, who has been at his cajoling best during this past forgettable week.

That the Supreme Court’s patience was running thin is stating the obvious. But whereas it was quietly pushing and prodding the government to implement the NRO judgement, the PPP leadership decided to jump the queue and fast track the application by openly challenging the authority of the Supreme Court.

First came the Babar Awan press conferences box set comprising Part I, and its sunny sequel on the steps of the Supreme Court. Khursheed Shah followed suit by stating that he didn’t care whether he had committed contempt or not. The president then weighed in by confirming that a letter wasn’t going to be written to the Swiss authorities under his watch. Finally, enter the prime minister, whom, the Supreme Court noted in its order dated January 10, had made various statements tantamount to defying the implementation of the NRO Judgement. Such brazen disregard obviously struck the wrong chord. During a hearing of the ZAB reference, the Supreme Court’s hurt was succinctly summed up by Justice Jawad Khwaja:

“I always say that people can criticise judges, too, but Babar Awan’s utterance on media is too much. It was disparaging for me, after serving judiciary for 36 years.”

The Supreme Court has now decided to exercise Option 2 from the January 10 order wherein it flirted with the idea of initiating contempt proceedings against the prime minister for “persistently, obstinately and contumaciously resisting, failing or refusing to implement or execute” the NRO judgement. These assertions fall squarely within the law of contempt leaving the prime minister with the option to either justify his conduct or apologise for it. If satisfied that his apology is bona fide and genuine, the Supreme Court may let him off the hook. Otherwise, he faces up to six months imprisonment.

As others have noted, the appointment of Aitzaz Ahsan for this thankless assignment is pertinent. But his public view that the government may write to the Swiss authorities appears to be at odds with that of his party. How he manages to harmonize his legal opinion with the instructions of his client will be telling. Despite such apparent contradictions, his unwavering loyalty to the rule of law and to the party makes him an astute choice. Some years ago when he fell out of favour with the PPP, he stated in his typical eloquent fashion at a convention in Karachi that although he may be expelled from the PPP, the PPP will never be expelled from him. For now however, the only expulsion on his mind must be that of the prime minister from the National Assembly.

On a related note; karma sucks. After contempt proceedings were initiated against Nawaz Sharif in 1997, his government proposed amendments to the Contempt of Court Act 1976, as it was then, in what was widely perceived as a move to stall the contempt proceedings. The then leader of the opposition in the Senate, Aitzaz Ahsan was reported to have written to the president requesting him to return the amendment bill with advice to remove the provisions which allowed for an appeal against an order merely calling upon a person to show cause why contempt proceedings should not be initiated against him and an automatic stay on the proceedings after such an appeal is filed. The letter stated that these provisions were close to absurd, ill-conceived and only made for the benefit of prime minister at the time.

How the prime minister of today would have longed for such generous provisions in the law of contempt now.