T2F: A pursuit of the heart 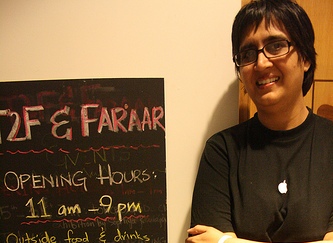 Sabeen is a role-model to many young Pakistani's

I first saw Sabeen Mahmud in 2000 at the TIE-Indus seminar, their first in Pakistan at the Sheraton, Karachi. She was bubbling with enthusiasm. Dressed in trousers with short cropped hair and holding a folder in her arms she had struck me as the “yuppie” breed, a fashionable term used to define young people who were entering the work force. Ten years later, she is the president of TIE and her heart’s endeavour,  The Second Floor cafe (T2F) is booming.

She seats herself in the cafe’s tiny but cosy balcony for a very brief interview – a look into her heart.

Sabeen’s inspiration was her mother. Mrs Mahmud, an educationist in Karachi, always rebelled against their life in Bengal (then East Pakistan). She admired her mother for standing up against tradition and status quo. This in essence defines Sabeen’s main goals today which centre around activism.

Her real journey was from 2000 to 2010. Her conscience searched for the meaning to life, as she fought for what was right, and learned the value of of activism. She says that her ideal world is one where people will no longer think of activism as a solitary act of  random protest but will stand up against injustice, discrimination and dogmas every day.

A platform for good

Sabeen left behind the glossy corporate world to enter ‘Peace Niche’. The organisation, she says is  not an NGO (she is sceptical of the term due to various kinds of organisations that are misusing it in Pakistan) but a social platform where goodness can be launched. Many discussions and exhibitions on politics, culture and social discourses have taken place at the ‘Faraar’ art gallery and many good samaritans have launched philanthropic organisations or groups here.

The business of peace

How has she become an entrepreneur par excellence with a social conscience, in a short period of only three years ?

While Sabeen uses social media such as Facebook and Twitter to invite friends, she says she just lets people find T2F organically. She never wanted people who were uninterested to come to T2F, who were there for advertising or simple material gain.

Her ethics are reflected in her passionate discourse. She dislikes branding, hates unethical “gora rang karne wali cream ads”, loves all religions, races, genders, ages, and persons. “T2F is  a place where anyone without a ‘membership’, without a ‘club’ exclusivity can freely enter, sit , enjoy a coffee, look around and chat and meet people in comfort,” she says.

The expensive exclusivity of Karachi’s posh restaurants and clubs does not offer the kind of social and intellectual atmosphere that exists at T2F. She has beaten The Arts Council and successful clubs and in bringing together activities that are important for the intellectuals in Karachi. I remember there used to be  coffee shops by the name of Café Grand and Shezan where such activities took place in the 1960’s. Somehow this new forum has moved beyond being a coffee shop to a multi-dimensional platform.

The question is unavoidable. How does she plan to bring about the much needed culture of tolerance, social awareness and change, when most of the people of Pakistan are entirely on a different plane?

Sabeen answers my question with a steady gaze. She does not see a massive revolution. “The people of Pakistan are going through severe disasters and traumas every day. They need to recover and absorb the shocks. They need understanding and support. The ideas will spread slowly, in a ripple effect.“

She also understands her niche. “I see a light, beckoning at the end of the tunnel that Pakistan has entered right now,” she says.

I see hope in Sabeen’s eyes – hope for a more tolerant, aware and egalitarian Pakistan. She stands tall as a role model for young people who want to be Pakistanis who are educated in the real sense of the word, not in some fancy elitist degree-holding sense. She has created a ‘brave new world’ of thought and wonder where one can get lost and find an anchor.

A blog on development, health and human rights.

Hungry for some rights

Guns and poppies in Sindh