Explaining the garlands for Qadri 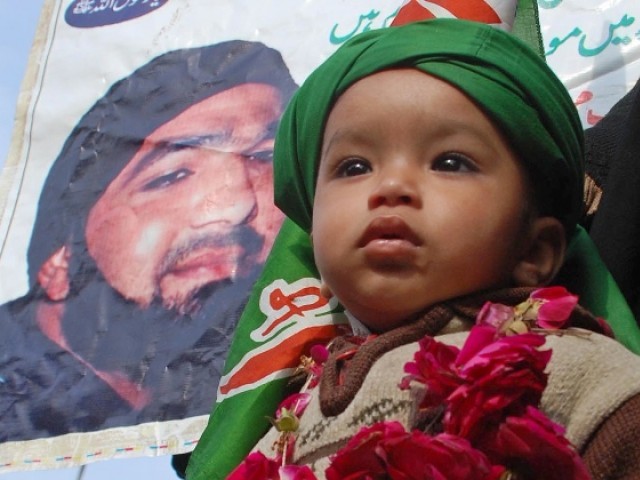 The bitter truth is that most Pakistanis condemn the court's verdict of capital punishment for Qadri. PHOTO: INP

You may argue that a large number of people in Pakistan condemn the assassination of Salmaan Taseer. But the truth, though bitter, is that many instead of condemning the heinous act of a murderer, condemn the verdict of the court which proclaims capital punishment for Mumtaz Qadri.

There are campaigns running throughout the country that pay tribute to a murderer. Huge posters of Qadri, decked with Quranic verses and beautiful roses, are plastered all over and yet there is no one to remove such aberrations. Some believe that the reason for this queer phenomenon is illiteracy, and talk about it in a way that makes illiteracy seem like a sin. The truth is that you cannot blame illiteracy alone for such happenings. Can illiteracy be blamed when a lawyer applauds Qadri on the way to his court proceedings for his ‘lofty deeds’?

I still remember the day that one of my classmates refused to shake my outstretched hand because I am an Ahmadi. I was in Islamabad then, a city with a literacy rate of more than 80 per cent, and the course which my honourable Muslim friend and I (a non-Muslim declared by the state) were enrolled in was Masters in English Literature. Can studying literature ever be considered a harbinger to such narrow-mindedness when one thinks of himself as paleed (filthy) after shaking hands with someone of a different belief? Is this illiteracy? I do not think so.

In a recent debate on blasphemy held in the Punjab Assembly, the Planning and Development Minister Chaudhry Abdul Ghafoor showed double standards when he first said “the faithful would not always wait for court orders in such cases” and later said “the minority members should wait until the court decided Aasia Bibi’s fate.” I am baffled as to why the ‘faithfuls’ would not wait for court orders when minorities should have to wait for court orders. Are those who formulated the blasphemy laws against which the slain governor raised his voice, deemed illiterate? Going further back in Pakistan’s history, are we to consider those who amalgamated Islam with Pakistan illiterate?

The real cause, therefore, does not seem to be the illiteracy of the people, but it is indeed the coercion of a misinterpreted version of Islam. Let me reproduce the arguments of Qadri’s defence:

“My client issued a 40-page written statement, which refers to 11 verses of the Quran, the Sunnah, and 28 citations of prominent Muslim jurists. If Qadri had not carried it out, someone else would have”.

The lawyer thinks that Salmaan Taseer’s death was inevitable in the light of Quran and Islamic jurisprudence. Another paper reads:

“By punishing one Mumtaz Qadri, you will produce a thousand Mumtaz Qadris!” a man shouted through a megaphone outside the jail.

Unfortunately, those whose only focus is the hasty execution of the court verdict, should bear in mind that sending Qadri to the gallows is not going to bear any fruit except for a minuscule contentment which the Taseer family might gain out of the punishment.

The real crook is not Mumtaz Qadri, but those who made him think that beheading someone is not a crime but a gateway to Jannah (paradise). The real culprits are those who indoctrinated Mumtaz Qadri and heaps alike, by misinterpreting the verses of the Holy Quran and Sunnah. The criminals are those jurists who had issued 28 citations inciting someone to take somebody’s life. The death of Qadri shall only be bereavement for many, but will never remedy the rampant lunacy which overrules all emotions.

An alumni of a religious university who has specialised in the studies of comparative religions. He also holds an MA in English Literature and Linguistics. He currently working for a community in London and tweets @rashid_zafar