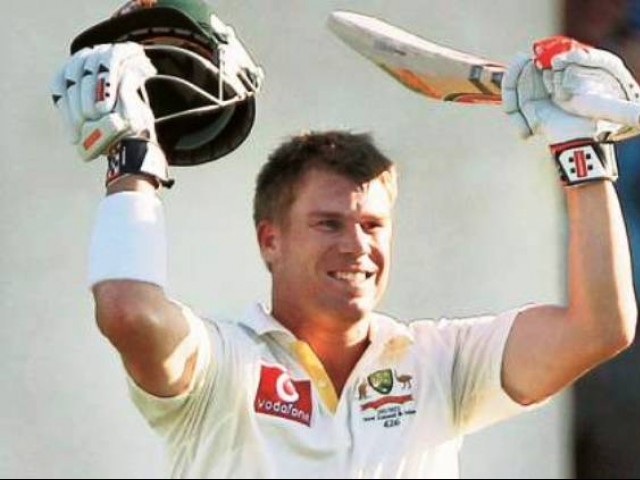 From Warner the T20 cricketer to Warner in whites: a true cricketing metamorphosis. PHOTO: REUTERS

David Warner’s scintillating debut against South Africa in a T20 fixture, where he scored 89 off 43 balls, told cricketing fans that maybe they were not going to miss the mighty Mathew Hayden that much after all.

The stark contrast in the frames of the two left-handers is more than compensated by their consubstantial batting styles – belligerent and disheartening for the bowler. Many players phase out after such breathtaking debuts and are unable to carry on the high of their initial promise. Warner, however, proved to the world that he was not a one match wonder.

The first player to break into the Australian national side since 1877 without playing any first class games, he took to international cricket with the swagger of Vivian Richards and the natural ball striking ability of Gilchrist. The early signs were ominous as he made a world record 165 for New South Wales and then followed it up in a 54 ball 97 in the FR cup at the beginning of that summer.

After an impressive couple of years in the international and domestic circuit the icing on the cake came in the latter half of 2011, when Warner scored back to back centuries in champion’s league tournament and stunned both the general public and analysts alike. The scary ease and elegance with which he cleared boundaries, challenged and defied cricketing logic at times. The most striking thing about his innings was that they were not mere slogs as are associated with T20 cricket, but were proper cricketing shots. This led the no nonsense Australian commentator, Ian Chappell to predict that Warner might be suitable to play the longer format of the game; a phenomena almost unthinkable in the mind of a cricket purist.

Ever since its inauguration, T2O Cricket has been associated with fun and giggles, and its specialists are not even considered for selection in the longest and most prestigious format of the game: Test cricket. Cricketers good at scooping the ball over the keeper or throwing the proverbial kitchen sink at the ball are always thought of as inferior in skills to batsmen who can play straight drives right out of the coaching manual. In fact, there has been rigorous debate over the merits of T20, with legends like Michael Holding and Mohammad Yousaf declaring it as detrimental to the development and evolution of the game and its players.

So, here was a guy, whose claim to fame was T20 cricket; he had not a single One Day International century to his credit, and was now being touted for the coveted baggy green. This was something that was just too much to handle for the cricketing puritanical. Questions were being asked of his temperament and technique and his ability to curb his natural instincts and play the waiting game.

However despite all this, events transpired in his favour when Warner was provided an opportunity to prove his detractors wrong in the series against New Zealand. He failed to impact the first Test, but his lone fighting hundred in the second Test at Hobart was a harbinger of what was to come. It was a real watershed moment in cricketing history as a player, who was discovered through what is considered by many as the “hit and giggle” form of cricket, made it big in Test cricket which is thought of as the best judge of a player’s mental and physical abilities.

Since that innings, David Warner has moved from strength to strength and his 100 off 69 balls in the opening day of the Perth Test is a fantastic testament to how he has become a truly unique Test player. This is the fourth fastest century in the history of Test cricket.

Lofting new ball bowlers into the stands in the initial overs of a Test innings with nonchalant ease, when the conventional openers would be more than happy to preserve their wicket and see off the shiny new ball, is changing the way people perceive Test cricket. In the words of another great left hand opener, Saurav Ganguly, Warner is really changing the face of Test cricket. This change is consistent in ways of the contemporary world where people have little patience for subtleness, and are looking for doses of adrenaline. So, as implausible as it might sound, Warner might actually be doing a service to fading Test cricket by injecting new interest into it. And this transition in has been brought on by a personal transformation. From Warner the T20 cricketer to Warner in whites: a true cricketing metamorphosis.