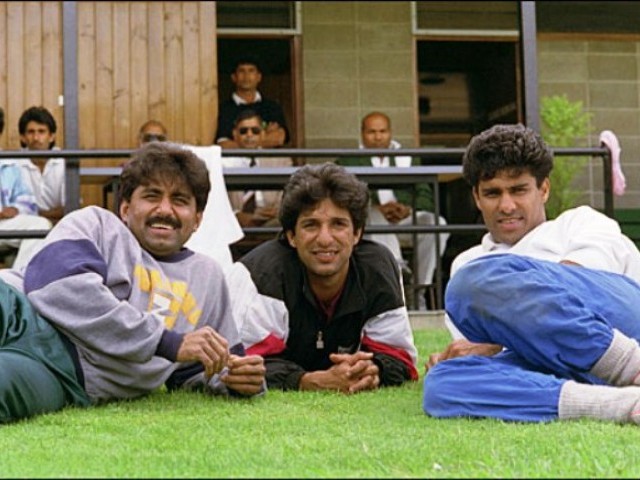 No discussion on the greatest fast bowling duos of all time will ever be complete without mentioning the two W’s PHOTO: AFP

In recent times, cricket has undergone a fast bowling renaissance of sorts. Watching James Pattinson harass a much vaunted Indian batting line-up with speed and bounce in Melbourne and Sydney was a sight to behold. Pattinson is just 21, and he along with fellow Australian Pat Cummins (18) and the South African duo of Vernon Philander (26) and Marchant De Langle (21), represent a growing young breed of top class fast bowling prospects.

There is no dearth of fast bowling talent in Pakistan either. Junaid Khan and Wahhab Riaz, two of the more recent entrants into the Pakistani bowling hall of fame, are solid proof of a burgeoning fast bowling cabinet. Irrespective, discussing the contemporary face of fast bowling is merely an excuse to sneak a peek into the past and glorify two of our very own cricketing legends, Wasim Akram and Waqar Younis. No discussion on the greatest fast bowling duos of all time will ever be complete without mentioning the two W’s; in their possession was inimitable skill which helped them amass incredible career statistics, and earn dizzily high slots on the fast bowling pedestal.

Waqar’s run up was a glorious sight – a searing gallop to the wicket culminating in a side on action of pure beauty. In his younger days he was one of the fastest ever, breaking stumps and crushing toes in equal measure. Wasim’s was a shorter, more checked run-up in balance and rhythm that led to an explosive whip of the left arm. His mastery over seam and swing was a work of art, and it all happened at blistering speed. A certain Alan Lamb was once bamboozled by a delivery of pure venom, pitched on middle, the ball reverse swung away at ferocious speed to beat the forward defensive prod. Next ball, Chris Lewis was cleaned up by an in-ducker that literally swung a mile. The year was 1992 and the venue was cricket’s very own theatre of dreams, the MCG.

While Waqar was often deemed as the man who really put the reverse into swing, Wasim was labelled as the “grand daddy of reverse swing”. It was on Pakistan’s tour of England in 1992, that the two W’s really came to the fore as a potent bowling duo; using both conventional and reverse swing they blew away the opposition batting line up. Embarrassed, perplexed, and obliterated, certain quarters in England branded their skill as “ball tampering”. Off course nothing untoward was ever discovered or attributed, since then most fast bowlers (English included) have successfully utilized the skills practised and honed to perfection by Wasim and Waqar.

Such was their international appeal that it transcended sporting as well as national boundaries, so much so that the brilliant Jamaican sprinter Usain Bolt terms fast bowling his passion and Waqar Younis as his favourite cricketer.  Kumar Sangakkara, Srilanka’s premier batsman once labelled Wasim Akram a “sorcerer”, stating that he was the most skilful and deceptive fast bowler he had ever faced. A great sportsman praising the skill of another is a rare happening, it’s an accolade reserved only for the best of players.

57% of Waqar Younis’s entire Test dismissals were either bowled or leg before, the same stat for Wasim Akram stands at 53%. This is a perfect testimony to their outstanding reverse swing capability and their ability to bowl a full length with the old as well as the new ball. Tail-enders usually stood no chance against spells of sustained hostility and late swing. Victory marches were often swift and opposing sides capitulated in a hurry once the top order was dismissed.

They say that the greatest fast bowlers in cricket always hunt in pairs. The great West Indian fast bowlers of the 1970-1990 eras usually hunted like a pack of hungry wolves; Garner-Marshall and Ambrose-Walsh are worthwhile examples. So did Alan Donald and Shaun Pollock, Lillee and Thomson, and Trueman and Statham before them. Wasim and Waqar were no different in this aspect either; they have the highest number of test wickets (476) for a pair of opening bowlers bowling in tandem, at a stunning strike rate of only 46.05 balls per wicket.

Admittedly, like many other sporting superstars, their time was not fully devoid of controversy. Infighting and allegations of match fixing have hounded Pakistan cricket long before the Asif, Butt and Aamir saga. But that should not and never will act as a smoke screen that smothers two of the most tremendous fast bowling careers of all time.