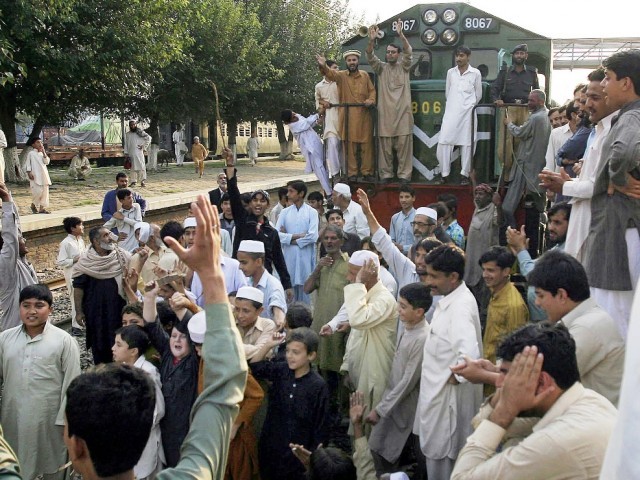 I was recently discussing the dilapidated condition of our railways system with a friend when he suggested a similar, yet far more expansive solution to the problem; privatise the system completely. PHOTO: PPI

It seems that the damage done to the railways system by our lack of leadership and management has not crippled the institution just yet – the prime minister has just announced a business class service to be offered from February 3, 2012. This is not a novel idea, but a good one nonetheless. Why did this thought take so long to materialise? Considering that PPP supporters burnt down 130 carriages at the time of Benazir’s assassination, I am surprised that the government didn’t take notice of the situation earlier.

I was recently discussing the dilapidated condition of our railways system with a friend when he suggested a similar, yet far more expansive solution to the problem; privatise the system completely.

He based his idea on the success of the Daewoo Bus Service and it also got me thinking, why not?

Here are some basic facts regarding the railways system currently operating in Pakistan:

Future potentials include domestic expansion from:

The concept of privatisation for the railways system was discussed in 2010, but the division was based on passengers, freight and manufacturing businesses. I believe what my friend was proposing was a further division within each section, especially for the passenger line, in order to create a sense of competition that would drive improvement.

Creating a sense of competition within each section leads not only to better services and improved infrastructure but also focuses on profitability which inevitably leads to an improved system as it is based on consumer satisfaction.

In order for this to happen, the government may need to do the following:

The above mentioned points seem simple. Perhaps they even are. The only thing really lacking is honesty and the integrity to do good for the people who have voted the government in power. It would have been ideal if there was no need to privatise one of the most basic needs of the people, such as transportat, but unfortunately that is not possible with the current state of affairs. The best we can ensure is the continuation of the service at a reasonable rate.

So far the condition has gotten from bad to worse. With the announcement of the business service locomotive starting shortly, one wonders why we can’t offer something to the poor, the larger segment for whom the railways was and still is, the only form of travel across the country.

It seems that our government is so incompetent that they have resorted to foreign consultants to help resolve the railways issue. I can’t believe we didn’t have the brain power to come up with solutions ourselves. 170 million people in Pakistan, and we have to consult outsiders to find solutions.

Whatever the case, the current government can still save face and save the wreckage known as Pakistan Railways from becoming yesterday’s trash.