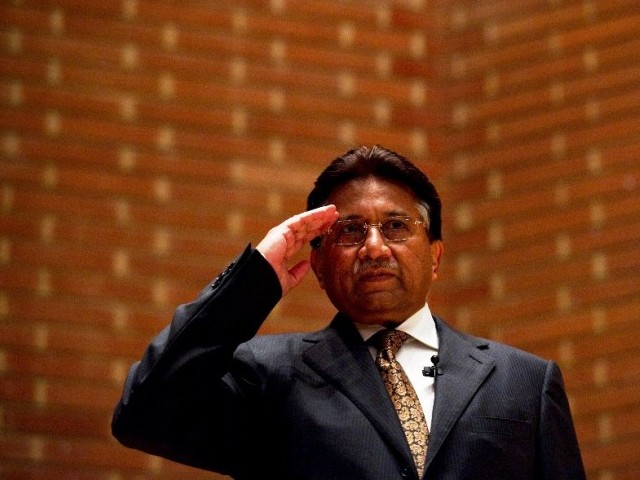 The infamous NRO proves to be a stain on his uniform (read designer sherwani) that cannot be washed by neither Ariel nor Surf Excel! PHOTO: TMN

Enough has been written on APML’s Karachi jalsa on January 8. Much has been said about the not-so-intelligent choice of venue, drawing immediate comparisons to the mammoth PTI crowd just two weeks earlier. Perhaps its time to dwell on why there were less supporters (read 8,000 – 10,000) in the ground.

General (retd) Pervez Musharraf is undoubtedly among the few love affairs of the Pakistani public. At a certain time in recent history, millions of us worshipped him, liked and loved him, defended his actions and chanted his slogan ‘Sab se Pehle Pakistan’. We were proud that we were led by someone who presents our stance courageously in front of the whole world.

There is simply no point being cynical about his tenure and bashing him baselessly. The former general did make some economic scoring during his time. Education had the government’s full attention and scores of universities and colleges were opened and chartered. The media revolution (read channels and talk shows) happened in Pakistan during his time.

But when you are at the helm of affairs, then your mistakes haunt you eternally, don’t they? Especially when they have impacted millions of people around you.

While there are some differing views and somewhat supportive evidence in favour of becoming a part of the War on Terror, the Lal Masjid action (read massacre), Bugti’s killing (read extra-judicial) and his love for the uniform, he has expressed three different views on the sacking of Chief Justice Iftikhar Muhammad Chaudhry.  In several interviews, he has called it a just decision at that particular point of time and defended it. Many other times, he said he doesn’t want to comment on it. In the third stance, he has expressed regret over his decision and the country-wide crisis it caused. Musharraf’s critics asked him to make up his mind.

Then came the lawyers’ movement. The only solution he could come up with was baton charging them repeatedly. When the TV channels went berserk, they were shut down and ransacked in the name of an emergency. When newspapers started giving the Balochistan crisis cover page attention, government ads were pulled back and pending payments were held.

May 12 went unnoticed. Dr Aafia Siddiqui and many others disappeared from Pakistan and reappeared in the US, at the US Bagram Air Base in Afghanistan and at the Guantanamo Bay detention camp in Cuba. There was no just explanation. According to the first edition of his book ‘In the Line of Fire’, they were sold against $300 something. The information was deleted in later editions, explanations and apologies were offered. It was called an editing error.

But the bomb shell came when a miracle was needed. When he was expected to save the country, he tried to save his powers and position, but in vain. The infamous NRO proves to be a stain on his uniform (read designer sherwani) that cannot be washed by neither Ariel nor Surf Excel! Mush has realised very well that a large chunk of his supporters bade him farewell for good when his NRO signing brought all the perpetrators, looters and corrupt politicians back to the election scene, allowing them to contest again and loot more.

The general’s actions have proven to be irreversible and detrimental to the already collapsing system in our country. You stabilised the system to a great extent, sir, but than officially handed it over to Zardari. Why?

For the NRO specifically, he has blamed his advisors (read Tariq Aziz) for misleading him. Now one wonders, that after the ‘I will not allow corrupt leaders to come back to the country and do more damage’ rhetoric for nine straight years, just one advisor and one piece of advice can convince him enough to overdo everything he did in the name of country-love! Sir, after being the chief executive of the country for such a long time, if you were not able to judge advice that your signature on one wrong document can cause such collateral damage to your country, do you think you deserve a second chance?

I must say that Musharraf lost my vote the day he sent an election invitation (read NRO) to the entire corrupt brigade.

At a time when he has announced his return to Pakistan, the most important truth is apparently not his election campaign or impending alliances. It is his survival that seems shaky due to the ghosts from his past. Out of all the political leadership in Pakistan, Musharraf has the maximum number of enemies – the Taliban, the Pakistan Muslim League – N (read the Sharif family), the Lal Masjid survivors and supporters, the lawyers, the judges (read CJ Iftikhar Muhammad Chaudhry) and the Baloch (read the Bugtis) who don’t forget or forgive, but just wait their turn.

A corporate communications professional and co-founder of a Karachi based NGO.

Of laptops, marriages and Nawaz Sharif

A dummy's guide to corruption