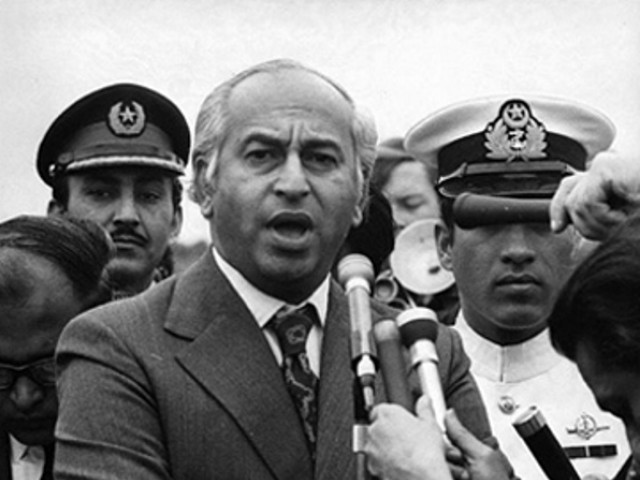 Using religion as a tool to promote a political idea has seriously affected the country and gained ground for the cancer of religious fanaticism. PHOTO: FILE

Zulfikar Ali Bhutto, the former prime minister and president of Pakistan and the founder of the Pakistan Peoples Party (PPP), still remains one of the most popular and most controversial figures in Pakistan. With the title Quaid-e-Awam (leader of the people), he is undoubtedly the most charismatic political leader Pakistan has ever seen.

Bhutto was also the first democratically elected leader to introduce the culture of using religion for political gain in Pakistan. In 1974, Pakistan’s parliament, under his premiership, adopted a law declaring Ahmadis to be non-Muslims.

For Bhutto, the move was purely political as he sought to appease religious conservatives. If this move was not political, would he have dared marrying the Iranian-Kurdish Begum Nusrat Ispahani, who was a Shia Muslim? Let’s avoid this question because some argue that the Bhutto family is Shia Muslim by faith themselves.

When Bhutto orchestrated, authorised and administrated the most ambitious scientific research on nuclear weapons, didn’t Bhutto know that his most senior and trusted science advisor Abdus Salam was an Ahmadi Muslim by faith? Salam played a major and influential role in Pakistan’s science infrastructure and was responsible for not only major developments and contributions to theoretical particle physics, but also promoted scientific research to a great extent in the country. As a science advisor, Salam played an integral role in Pakistan’s development on the peaceful use of nuclear energy, and he also directed the research on development of weapons in 1972. Because of this, he is regarded as the ‘scientific father’ of this programme by the scientists who researched under his umbrella.

But Bhutto, in a desperate attempt to buy off religious parties anxious for his departure, declared Ahmadis as non-Muslims.

Because of this controversial move, Pakistan lost the national treasure, Abdus Salam. He left Pakistan to settle in the United Kingdom in protest when he could have contributed much more to the development of science in Pakistan. In 1979 Abdus Salam, together with Sheldon Lee Glashow and Steven Weinberg ‘the American physicists’, was awarded the Nobel Prize in Physics:

For their contributions to the theory of the unified weak and electromagnetic interaction between elementary particles, including, inter alia, the prediction of the weak neutral current.

Salam holds the distinction of being the first Pakistani and the first Muslim Nobel Laureate to receive the prize in physics.

Bhutto’s injection of religion into politics didn’t stop there. In 1977, he banned alcohol consumption, again in an attempt to appease religious conservatives and distract the population from a less than stellar governance record – when in fact he was a drinker himself.

Bhutto had publicly admitted to drinking alcohol when speaking at a rally where he accused the religious political leaders of ‘drinking’ the people’s blood.

Yes, I do drink wine, but at least I don’t drink the people’s blood.

When General Muhammad Ziaul Haq overthrew Prime Minister Zulfikar Ali Bhutto in a coup d’état on 5 July 1977, Bhutto became a victim of his own winning strategy. Zia used religion against him and started the Islamisation of Pakistan to fight off Bhutto’s popular ideology.

Since then, using religion for political gain has been an integral part of Pakistani politics. This has seriously affected the country and gained ground for the cancer of religious fanaticism. Religious fanaticism has shown its face as sectarian violence, as we have seen serious Shia-Sunni discord and attacks on Ahmadis. It has also had an impact on religious minorities as they now live in fear under the blasphemy law. A country that is in crisis at every level is going up in flames.

The founder of Pakistan, Quaid-e-Azam Muhammad Ali Jinnah, envisioned the creation of Pakistan as a secular state and he made it clear in his Presidential Address to the Constituent Assembly of Pakistan on 11th August, 1947.

In fact, Bhutto was an opportunist who misused religion by stirring up the masses. He was the first to distort Quaid-e-Azam’s vision of Pakistan.

The Pakistan Peoples Party, the current ruling political party of Pakistan, following the footsteps of their founding leader, used similar tactics to handle the controversial blasphemy case of Asia Bibi, even isolating their own prominent PPP party leaders like Sherry Rehman and Salmaa n Taseer who spoke against the law.

Sherry Rehman submitted a private member bill to the National Assembly Secretariat seeking amendments to soften the blasphemy law after Asia Bibi was sentenced to death under the blasphemy law, which also sparked an international uproar.

Salmaan Taseer, a brave and outspoken secular politician, spoke against the law, calling it a ‘black law‘, and it exposed a deep rift between conservatives and liberals in the country.

The PPP instructed all its leaders including Ms Rehman and Mr Taseer to change their stance but Taseer stood firm to defend the rights of women and minorities in the country. One of Taseer’s last tweets was:

I was under huge pressure sure 2 cow down b4 rightest pressure on blasphemy. Refused. Even if I’m the last man standing.

The PPP government thereby distanced itself from Governor Salmaan Taseer after religious edicts were issued against him, and brought forward Prime Minister Syed Yousaf Raza Gilani to assure religious conservatives that the government does not have any intention to amend the blasphemy law. This move was again pure politics to stir up the masses to save their government as they have failed miserably to lead the country. Finally, governor Taseer was shot dead by his own bodyguard for speaking against the blasphemy law.

In Pakistan, unfortunately, religion is placed above its citizens, excluding them from equal rights. This was certainly not the vision of  our founder Muhammad Ali Jinnah.

A member of the Kalasha community and a student of Economics at Aristotle University in Thessaloniki, Greece. He tweets @seekndare

Why won't NADRA recognise the Kalasha?