The rise and fall of Dhoni and Clarke 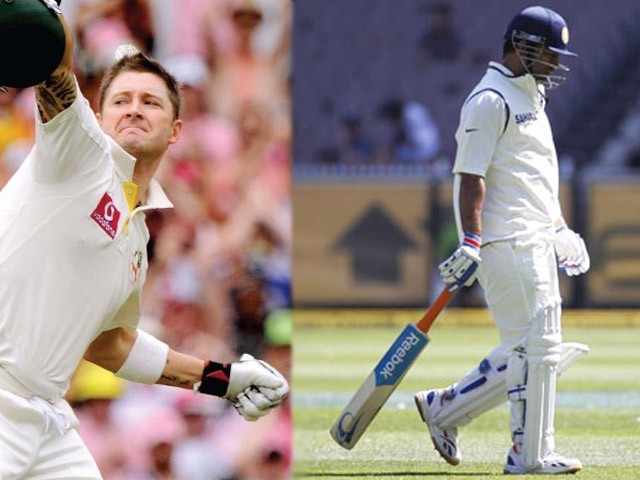 Clarke has shown tremendous responsibility after taking over as captain and has been more successful than Dhoni. PHOTO: FILE

It is often said that success is easy to obtain but very difficult to maintain. Winning the World Cup was the biggest thing that happened to Indian cricket in recent times. It was a rather young side that went on to scale new heights a few months ago. Maintaining momentum and hunger after such a spectacular achievement was a big challenge for India. Sadly, the team failed to live up to that challenge.

Looking at India’s overseas record in Tests since the World Cup, it is evident that the fizz has gone out of their performances. Also, considering the current scenario, it is scary to imagine what could possibly happen to this Indian side once the stalwarts make an exit considering the fact that very few from the remaining lot of players are stepping up to the challenge posed by Test cricket. In the words of skipper Mahendra Singh Dhoni:

“Everything that could go wrong, went wrong for Team India.”

And it still continues to go wrong. The openers have failed yet again to get India off to a solid start, the middle-order woes have worsened, and the bowling unit has become rather unpredictable. It is surprising that the same bowlers who display glimpses of brilliance in one innings are taken to the cleaners in the next.

Dhoni’s Midas touch is  running out. What else could explain India’s shocking overseas record in Tests since May 2011? India has played nine away Tests since that period and has won only one. That victory too came against a weak West Indian side. Thereafter, they were whitewashed 0-4 by England, and by the looks of it now, Glenn McGrath’s prediction that Australia will whitewash India 4-0 seems more than possible.

On the other hand, Dhoni’s Australian counterpart Michael Clarke has handled pressure exceptionally well despite occasional failures since the time he took over as a captain during the tour of Sri Lanka. Australia defeated Sri Lanka in the latter’s own backyard and then went on to level the series against a formidable South African side later. They dominated New Zealand in the first Test of the Trans-Tasman trophy but eventually fell short by just seven runs in the next Test. It is important to note that despite being in a transition phase, there has only been a marginal dip in the performance of the Australians. But there never was a dip in their hunger to win.

Australia has played nine Tests under Michael Clarke’s captaincy and lost only two of them. They lost the first Test that had a rather crazy twist to it against South Africa and then to New Zealand at Hobart despite David Warner’s heroics. On the other hand, India too has played nine overseas Tests since the World Cup, and has lost six of them. Even against a weak West Indies, they managed to win only one of the three Tests in West Indies. It’s true that MS Dhoni had a good record as a captain in Tests before the World Cup, but its been an appalling tale thereafter.

Batting wise too, Clarke showed tremendous responsibility after taking over as a captain and has been more successful than Dhoni. Clarke has scored 902 runs in nine matches at a brilliant average of almost 65, inclusive of three centuries and a triple century. Dhoni, on the other hand, has played 12 matches since May 2011 and has scored 568 runs in 12 matches at an average of 31.55. If you leave out his performances in the recently-concluded home series against the West Indies, Dhoni has scored just 403 runs in nine matches played abroad at an average of just 28.78.

In terms of captaincy, Clarke was never apprehensive when it came to attacking the opposition. Not once did it appear since the tour of Sri Lanka that the Australians weren’t fighting. The fielders always look charged and the Australian bowlers haven’t been easily disheartened even when things do not go their way for a brief period of time. Clarke makes sure that he talks to his bowlers whenever the need arises rather than just allowing his bowlers to go through the motions. Whenever the Aussies have their opposition on the mat, they make sure that they don’t ease the pressure and play the opponents completely out of the game. This is an old Australian trait that has effortlessly been embedded in this new-look side.

Dhoni’s approach is in sharp contrast to that of Clarke’s. Once regarded as a very clever-thinker and an innovative captain who relied heavily on his instincts, Dhoni has surprisingly transformed into a captain who now relies more on the opposition to make mistakes. He has begun to play the waiting game rather than creating opportunities. His field placements during crunch moments of the game have taken quite a few experts in the cricket fraternity by surprise; and rightly so.

Wasim Akram, legendary Pakistani bowler and former captain, was right when he said:

“I don’t understand Dhoni’s plans. When you are getting bounce and movement from an uneven wicket, why do you have a deep point and not a third man? You will be hit anyway if you are bowling poorly. Somebody has to put sense into the senior players and bowlers that you cannot contain without a third man in a place on a bouncy track.”

When Australia was reeling at 37 for three, Dhoni had the opportunity to attack further and put the Australians under more pressure. Surprisingly, Dhoni’s field placement eased the pressure off Ricky Ponting and Clarke. Singles were easily available and there were no close-in fielders who could have put the batsmen under more stress when they were relatively new to the crease. Morever, Umesh Yadav and Ishant Sharma strayed on the batsmen’s pads way too often during that period, and none of the senior players, including skipper Dhoni, went over to have a quiet word with the bowlers and encourage them. Even on Day Two, the Indians appeared to give up during the first half hour of play when Ponting and Clarke were chipping away right from the start. The fielders’ body language lacked confidence.

If India’s fortunes are to change, Dhoni must shed his defensive tactics and start to make things happen like before, rather than waiting for them to happen. The fielders and the bowlers have to stay charged throughout the day and not look defeated like they did just on the second morning of the second Test. Mark Waugh aptly put it when he said:

“The Indians have been very disappointing. They batted terribly and they just looked so lethargic on the field, they don’t look like they want to be there.”

Unless the skipper and the remaining players realise these basic flaws and correct them, this team is bound to hit new lows.

This article originally appeared on www.cricketcountry.com.

A graduate student, pursuing his Masters in Engineering who ardently loves cricket.