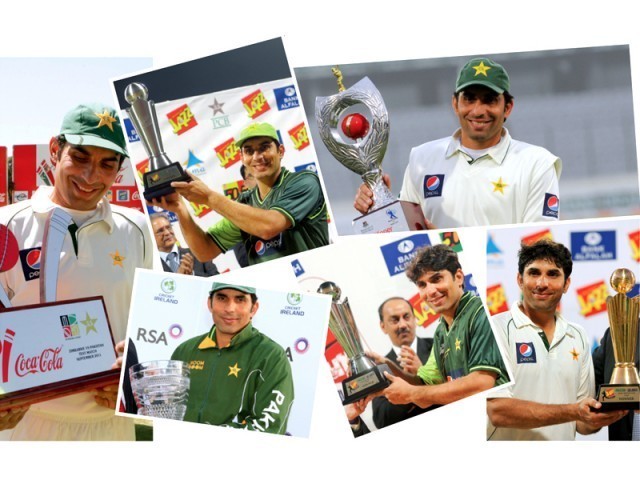 Here’s a look at some of the memorable events of the year 2011 involving the men in green. PHOTO: AFP

Team Pakistan entered 2011 under the dark clouds of the spot-fixing scandal. With the backbone of their squad ripped apart as a result of the suspensions of Mohammad Amir, Mohammad Asif, and Salman Butt, few expected them to achieve anything significant in the next 12 months.

However, as they often end up doing, Team Pakistan fought back magnificently and achieved a number of milestones. Here’s a look at some of the memorable events of the past year:

Pakistan started the year with a closely fought series against New Zealand. Under alien conditions, Pakistan’s new squad showed tremendous determination to seal their first Test series since 2006. They went on to beat the Kiwis in the ODIs series as well, and rounded off a highly successful tour as 3-2 winners. The chief destroyers, as always, were Shahid Afridi, Umer Gul, and a re-invented Muhammad Hafeez.

2. The semi-final versus India

Few expected Pakistan to achieve anything significant in the 2011 World Cup, jointly hosted by India, Bangladesh, and Sri Lanka. Under the leadership of the mercurial Shahid Afridi, Pakistan made everyone take notice by pulling off a major win against Sri Lanka in their own backyard, and then by bringing Australia’s 11 year long unbeaten World Cup streak to an end with dominating performances. The clash of the year, however, came in the semi-final of the tournament when Pakistan locked horns with arch rivals India in one of the most hyped games in the history of sports. Under extreme pressure the men in green played outstanding cricket and won the hearts fans with their fighting cricket. Although it all ended in tears when Afridi’s men lost to India, but it was Afridi’s statesmen-like attitude that elevated him from a cricketing star to a sporting legend in Pakistan.

One of the highlights of the year 2011, was the rise of Mohammad Hafeez as a genuine all rounder. His talent was never in doubt, but questions always existed over his application. He put all that to rest in a Bradmanesque year, where he pounded boundary after boundary and consistently made key contributions both with the bat and the ball. He also managed to resolve Pakistan’s long standing problem of finding a reliable opener. Hafeez ended the year as one of the leading performers and the top all rounder.

As he does every year, Shahid Afridi found another reason to quit cricket. This time it was differences with the coach Waqar Younis. He openly criticized the PCB and announced conditional retirement from International Cricket.

With their star on the rise, team Pakistan made their way to the Caribbean to prey on the ever-declining Windies. They started their successful trip with a Twenty20 win and went on to take the ODI series 3-2. The West Indies, however, pulled one back when they beat Pakistan in the first match of the Test series, only to lose the 2nd one to Misbah’s boys.

As he does every year, Shahid Afridi retracted his retirement from International Cricket, and made his way back as an all rounder under the leadership of Misbah. His return sparked joy among cricket fans and gave another talking point to his critics.

7. Afridi, Sri Lanka, and Sharjah – a recipe for destruction

In one of the most memorable victories of recent years, Pakistan completely tamed a demoralised Sri Lankan team with embarrassing defeats in T20, ODIs, and the Test Series. The chief destroyer was Sri Lanka’s old nemesis, Shahid Afridi. Boom Boom put in one of the most memorable, all-round performances against Sri Lanka and sparked a spectacular collapse to snatch victory for Pakistan from the jaws of defeat. The rest, as they say, was history and Afridi was well and truly back.

He carries a distinct presence in the Pakistani team. As one of the few educated cricketers he makes a good candidate for an international captain. Nobody, however, thought that the 37-year-old Misbahul Haq could lead Pakistan to one of the most fascinating revivals of their cricketing history. With his own laid back style, Misbah preferred safety over adventure and gave unexpected joy to Pakistani cricket fans. One of his most significant contributions came as a mentor. Like a seasoned pro, he shepherded the talented, yet adventurous, Muhammad Hafeez, Asad Shafeeq and Umer Akmal and brought the best out of them. He also managed to keep the seniors happy and gave them the respect they deserved. After ending the year with victory over Bangladesh, Misbah sits pretty as the undisputed leader of Team Pakistan.

Since the day he made his debut, Taufeeq Umar has always looked like the most likely batsman to fill the opener’s slot for Pakistan in Test matches. His failures over the years, however, have mostly disappointed his supporters. That all changed in 2011 with a string of consistent performances and a couple of huge innings, including his first double hundred. The consistency with which Taufeeq has silently managed to contribute over the last year, has made him an important member of the squad.