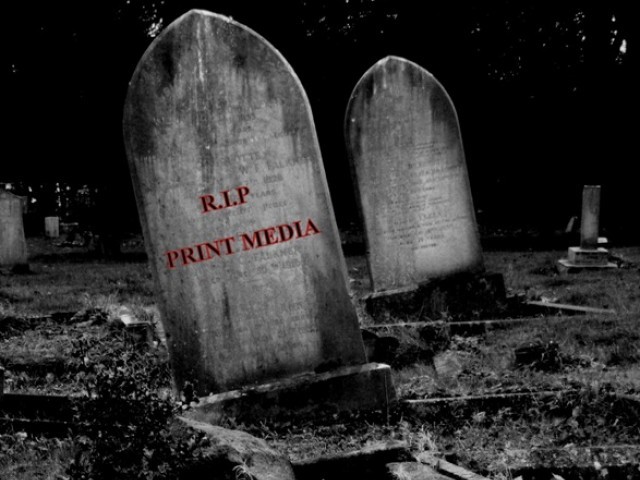 Whether our journalists acknowledge it or not, print media is dying and they are losing their readers fast.

In case you missed the story, the media world is changing, and print news is dying.

Given that I work in English print in a country where even the last English TV channel standing was forced to shut down, this should be a terrifying thought. I’m not the only one who is scared however – so is the New York Times (NYT).

Watching Page One: Inside the New York Times, a documentary focusing on the NYT’s struggle to stay relevant and adapt to a rapidly changing media landscape is like a glimpse into the future for Dawn, The News, The Express Tribune et al, and eventually, Jang, Daily Express and the rest of our Urdu print.

However, this demise of print has only begun to register in Pakistan, as we stay cocooned in an industry running years behind what is happening in the West. Speaking to local journalists and publishers about print trends abroad, there is always the same, vague, mildly self-confident and optimistic answer:

Or the frankly stupid:

“Pakistan is not like those other countries. We will always be a newspaper reading nation”

Unfortunately, the question is not ‘Is Pakistan a newspaper reading nation?’ to which the answer would be a simple yes; we Pakistanis do love our news. No – the question is, will we be reading that news in print, on paper?

The answer is no, and it will take far less than 10 years for this to become a reality in Pakistan, and to understand this, lets return to Page One where Richard Perez Pena, beat reporter at the NYT says:

“The collapse in advertising happened faster than anybody anticipated…it might just be that something very permanent has changed.”

Sounds familiar to those of us involved in print? Pena is not just talking about an advertising decline driven by a faltering global economy – he is talking about a fundamental shift in strategy in the advertising industry driven by the emerging shape of the media industry.

Clay Shirky, professor of New Media at New York University expands on this:

“Two things have happened…the first thing is that the advertising market has turned upside down, so the same time the revenue takes a hit, suddenly publishing has gone from something being done by a specialty class to something that literally every connected citizen has access to…so the authoritative tone with which the Times has always spoken is now one of many, many voices in a marketplace. And that reduction in advertising revenue coupled with competition for attention both at the same time has turned this from a transition into a revolution.”

Sounds familiar to everyone at Dawn (and Geo) right about now? However, it’s not just a lack of ad revenue and competition on the print front that is killing print media – critical to its demise has been competition from TV news and the internet, and the fact that local print simply has not taken up the challenge of adding value to their reports to make them relevant (leaving aside whether that value addition will be enough to keep readers). As Page One highlights, at one time the NYT set the news agenda, with all their stories defining what TV talked about the rest of the day. Now the system is reversed, with print journalists reduced to scribbling down their news from TV reports to deliver a mash up for next day’s paper.

Additionally, along come online outlets like WikiLeaks and your average blogger more than willing to break stories online, not giving a damn about legalities or plagiarism, challenging both TV and print. Anyone using Twitter right now knows that a lot of news reaches social media first, TV second, and print a distant third.

Whether our journalists and publishers acknowledge it or not, this phenomenon is already a visible trend in Pakistan. Whether they accept it or not, this is undercutting their relevance, losing them readers first in the tens, then by the hundreds, eventually by the thousands.

How important is news on social media anyway? Bloggers and social media folk only talk about content, not create content or journalism. These and other empty sounding phrases by my print journalist colleagues are irrelevant in the long run and display a profound misunderstanding of what social media means, but to try to deliver some context, let me quote Daniel Ellsberg, the man who leaked the Pentagon Papers to NYT:

“When I gave the Pentagon Papers to the Times, there was a 22 month period from the start of my copy, to it finally coming out…had the internet existed then, I would have bought a scanner, sent it out to all the bloggers…it’s not certain it would have had as good an effect, but at least it would have been out.”

Aamir Liaquat and the Pakistan Army, among others have already experienced the devastating impact news online has, and we can expect the online space to drive editorial direction for both TV and print – a trend that will grow rapidly in Pakistan.

What this means is that a fundamental shift is upon the media industry, with the internet poised to take pole position alongside TV, while print (on paper) will be dead and buried, with English print the first to go in Pakistan, or reduced to a token memento of what once was. What we will see in the near future is online versions of all our newspapers taking precedence over the print editions. Whether the media groups realize the significance of this or not is irrelevant. The consumer knows what he/she is doing and how he/she wants to consume news. Next will come 3G and 4G and cheap Chinese Tablets followed by dynamic, interactive Urdu news sites and blog sites. What will this do to a market place with every consumer owning a mobile phone and starved for information in Urdu? That’s right, the death of Urdu print, just shortly after English has wrapped up.

For those publishers or media moguls who believe they will, at that dying point, find the answer to how to save their print empires, or better yet, adopt the solution newspapers undertake globally, here is what Bill Keller, Executive Editor, NYT had to say:

“We’ve looked at every conceivable model all the way from philanthropic, could you find a generous foundation that wants to underwrite the NYT, to memberships. That’s an extraordinary thing. It used to be that newspapers almost gave themselves away; they charged far less than the cost of printing the newspaper and made up the difference in advertising.”

To sum up, the time for change is here. Those who do not change will die, and it will be a huge loss to the public, as there is no replacement for good journalism. To quote Keller:

Please note however, that this does not mean good journalism will survive just because it is so ‘good’ or because it is ‘tied to democracy’ – media folk and media well-wishers, beware of falling into that trap. News organisations will be as relevant as their ability to keep up with the changing nature of the world. If they cannot keep up, they will be replaced. This will prove to be as true in Pakistan as the rest of the world.