Defining moments of cricket in 2011 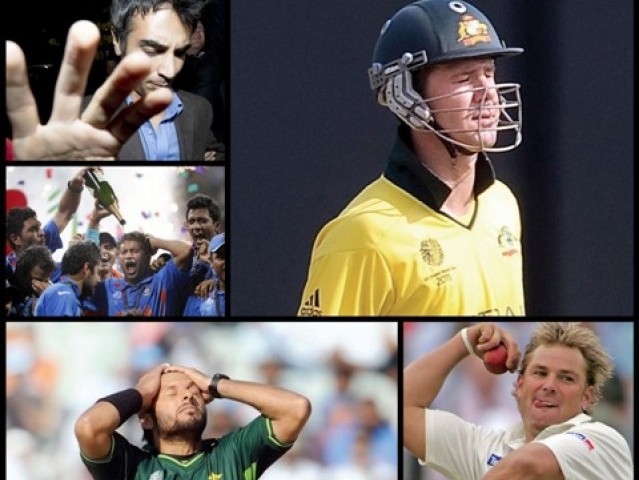 From cricketers being put in the slammer to Shane Warne returning to play cricket - this year has seen it all. PHOTOS: AFP/REUTERS

From cricketers being put in the slammer for spot-fixing to Shane Warne returning to play cricket – this year has seen it all. Here is my list of the top ten defining moments of cricket in 2011.

It is hard to sympathize with Ponting considering that he is the captain who led his side to the most wins and has lifted the World Cup twice. But the writing was on the wall after the first Ashes defeat for Australia in 24 years, and the first time that a team had lost three matches by an innings in an Ashes series.

The World Cup was his last hope, and after the dismal loss in the Quarter-Final to India, Ponting stood down and handed over the team to his deputy Micheal Clarke. It was the end of an era which saw Ponting lead one of the greatest sides that cricket had ever seen. Players of the class of Ponting, Hayden, Gilchrist, Warne and McGrath in one team happens only once in a lifetime.

It is only fitting that Ponting’s last act as captain was a fighting hundred against India in the Quarter-Final. Sadly, though, he will always be remembered as a captain who handed over the Ashes thrice.

9) Kevin O Brien leads Ireland to a win against England

England was sitting comfortably after scoring 328 and reducing Ireland to 111 for 5 in their group match in the World Cup. This was before things went downhill for them. Kevin O Brien decided to announce himself at the biggest stage of them all as he smashed the fastest hundred in the history of the tournament. Onlookers watched in disbelief as the carnage unfolded in front of them. His six hits over the ropes broke the English spirit and told the world that minnows were here to compete as well.

It was great timing as well considering many people had started questioning the inclusion of minnows in the World Cup after a string of one-sided encounters.

India lost horribly and were humiliated beyond belief in England. However, the captain did manage to make a statement of his own.

Ian Bell walked off carelessly at the stroke of tea during the Trent Bridge Test, thinking the umpire had called over and the ball was dead. In fact, Asad Rauf had done no such thing. The keeper took the bails off and the Indians appealed resulting in Bell being given run out. This left Bell and the crowd furious and exasperated and the Indians were booed off the field. To everyone’s surprise, Bell resumed batting after tea and it was found out that Dhoni had withdrawn the appeal in an amazing gesture of sportsmanship and had allowed Bell to resume batting, thus thwarting one of the biggest controversies that the game has seen.

Dhoni earned widespread praise for this gesture and was awarded ICC Spirit of the Cricket award as well.

7) Zimbabwe return to the Test fold

After a span of six long years, Zimbabwe made a comeback to the world of Test cricket. They had voluntarily exiled themselves from the format because of internal issues and dismissal performances on the field. However, they returned in style from their break beating Bangladesh by 130 runs. Masakadza and Taylor, both scored hundreds in the match while Jarvis and Vittori took five wickets each to round off a great match for the hosts. Taylor led the team with enthusiasm and aplomb.

Perhaps, Bangladesh can take a page out of Zimbabwe’s book.

December 8, 2011, the day when the prodigy went one better as Sehwag smashed the highest individual score in an ODI match. Sehwag shattered Tendulkar’s record with such aplomb that it is hard to imagine why it took him so long to do so to begin with.

It was built as the clash of the titans but ended up being a mismatch between two unequal teams. India was no match for England’s intensity and skills and it showed in the score line of 4-0 in favor of England. India’s number one spot in ICC Test Rankings and the Pataudi trophy were wrenched from them as they managed to score 300 just once in eight Test innings. The famous batting line up comprising of Sehwag, Gambhir, Dravid, Tendulkar, Laxman, Raina, and Dhoni failed to deliver and only Dravid came out of the series with his head held high. The lesser said about the bowling, the better.

T20 and ODIs read a similar script as India failed to win a single match of the series and were totally humiliated by an outfit more focused and better adapted to the conditions.

Rivalries don’t get any bigger than this! Private jets flew in and out of Mohali as a cascade of VIPs gathered to witness this encounter. The match was played out in front of the Prime Ministers of both the countries and it lived up to its billing of ‘Match of the World Cup’.

Who knows what would have happened had Tendulkar not been dropped four times or had Misbah-ul-Haq not thought it was a 60 over match. In the end, India won by 29 runs and kept its record of never losing to Pakistan in a World Cup game.

What stuck most was what Afridi said after the match:

“”I want to congratulate the Indian team and the whole nation. I think they deserved to win.”

3) Tendulkar being carried around as India won the WC

A dream come true for probably the most celebrated cricketer of all time. “Tendulkar has carried the burden of the nation for 21 years. It was time we carried him,” said Virat Kohli after he and his teammates carried Tendulkar around the Wankhede stadium in Mumbai as the city and the nation of one billion cheered their favourite son. India ended their World Cup drought 28 years after Kapil Dev had lifted the cup.

We thought we had seen him for the last time on the cricketing field as he said good bye during the IPL. But, everyone was pleasantly surprised as Warne decided to come back. Fox Sports sprung another surprise as they had him commentate throughout the matches as he played. Spectators got to hear live everything going through Warne’s brain – what an experience it was. You could hear Warne predict almost every move the batsmen made as he bowled to them. He got his man, Brendon McCullum, the way he said he would before the delivery – planned and executed to perfection. Later, his gambling instincts were on display to the fullest.

1) The tainted trio getting what they deserved

A landmark verdict! The tainted trio was sentenced to jail as the world looked on shocked. This is just what cricket needed. As the world pondered the implications of moving beyond traditional bans, players were told in no certain terms that fixers would be dealt with harshly and that players should think twice before indulging in such practices.