The case for online courts in Pakistan 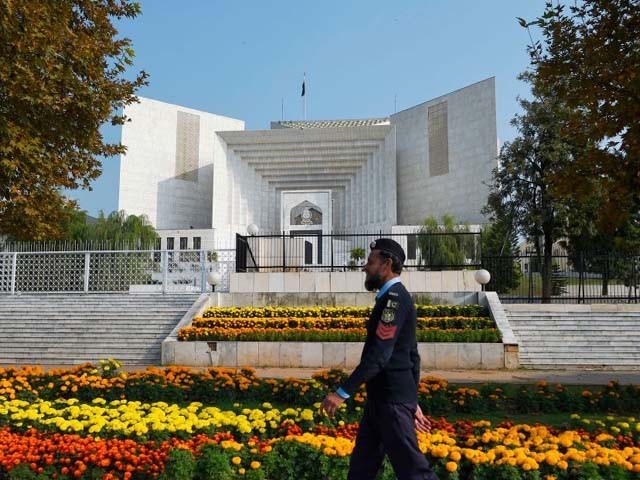 A policeman walks in front of the Supreme Court building. PHOTO: AFP

The novel coronavirus has crippled governments all over the world, due to which states and leaders are struggling to deal with rising unemployment, burgeoning debt and broken economies. However, what begs consideration is the court system and the access to justice in wake of these uncertain times. In March 2020, orders were passed by the High Courts in Pakistan to grant bail to prisoners undergoing trial or those who were sick or infirm. This order was subsequently overturned on March 30th by the Chief Justice of Pakistan, Justice Gulzar Ahmed. In its judgment, the Supreme Court issued orders for the re-arrest of all under-trial prisoners who were released, leaving more to languish in jails. Pakistani prisons are notorious for mass overcrowding; with a capacity of 57,742, they are currently housing 77, 275 inmates. With abysmal hygiene conditions and insufficient access to healthcare, prisoners live in miserable conditions.

With the fact that prisons function as breeding grounds for corona aside, I want to draw attention towards the long drawn out trial period that has been prolonged further for a lot of inmates. It is no secret that the civil and criminal justice in Pakistan is plagued with abnormally long delays with it being normal for criminal cases to linger on for decades, as evidenced by the high percentage of under-trial prisoners. Most courts have a backlog of cases going which go back many years, with a recent report of the apex court stating that 43,847 cases had been pending until March 31st. At the end of 2019, my peers and I in law school were involved in assisting in the criminal defence of a man accused of murder. Asif* has been in the District Jail Lahore for over 12 years while his trial has moved at a snail’s pace through the lower courts. So, for the likes of Asif, what does the Covid-19 lockdown mean? How many more months do under-trial prisoners have to wait for their already delayed cases to proceed? The constitution guarantees our right to freedom and liberty, but in these unprecedented times, do we not consider the basic human rights that are being violated?

Countries all over the world have recognised the need for the continued and smooth operation of the courts since they are especially important in maintaining order, stability and accountability during these unstable times. Online court proceedings is perhaps one solution to the problem at hand. While there are apparent difficulties that a developing country such as Pakistan will face in undertaking full-fledged proceedings in the recording of evidence and cross examinations in this regard, during these unprecedented times they have become the need of the hour.

The idea of online court proceedings is not completely novel in Pakistan. In May 2019, a three member Supreme Court bench headed by former chief justice Asif Saeed Khosa formally initiated the proceedings of cases through the e-court system at the principal seat in Islamabad and Supreme Court’s Karachi registry. Advocates in Karachi successfully argued their cases through video link, while the Supreme Court bench heard and decided the cases. Overseas Courts in Pakistan also employ online appearance in case parties reside outside of Pakistan and cannot appear before the court.

Recently, due to Covid-19, the Lahore High Court has set up a model court where cases are heard while observing social distancing. However, despite these small initiatives, to proceed towards a fully online and functioning court system drastic steps need to be taken. An efficient mechanism needs to be set up for the online filing of court applications, uploading documents and annexures, online signatures, a more efficient use of e-stamps, and well-rounded mechanism for online arguments.

Countries such as the United States (US), Canada and Turkey have been taking several steps for the provision of an online court system. Turkey for many years has had a national electronic service across all its judicial functions. Lawyers and citizens can examine files, pay application fees, submit their documents and claims, and file cases electronically to any court in the land. As a case progresses, they can access all relevant information and learn the day fixed for the trial without checking with court staff by phone or in person. Under lockdown, the Supreme Court in the United Kingdom (UK) is conducting entire cases by video link for the first time in its history. In the US, the approach adopted varies from state to state. The chief judge of New York state, Judge DiFiore, announced the postponement of all nonessential court functions and adopted a virtual court system.

While these steps may seem arduous to adopt for courts in Pakistan, online courts have the potential of bringing long term benefits to our archaic court system. An online court system, if implemented, could go a long way in improving access to justice for those who live far from legal centers including vulnerable minority groups and women. It could greatly stream line court proceedings and perhaps even help ease the never ending backlog of cases. So as challenging as it may seem, the process of digitizing our courts needs to start somewhere. The simple question is that if the courts will not help maintain stability during these times of instability then who will?

The writer is final year law student at the Lahore University of Management Sciences (LUMS).