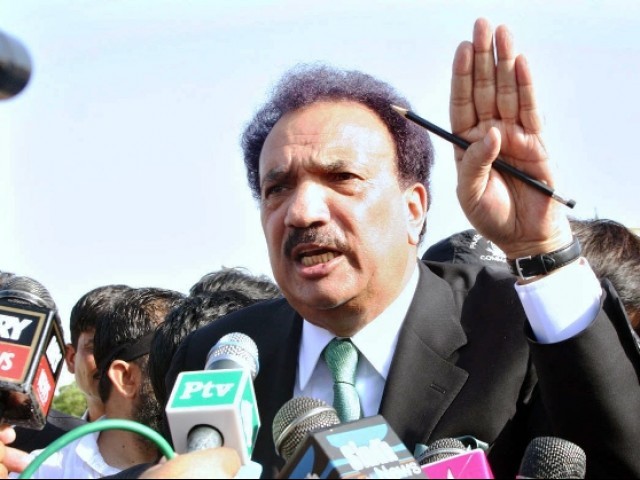 "They were wearing black clothes like in Star Wars movies." PHOTO: APP

Be it Veena Malik, Shoaib Malik, or Rehman Malik, there is one thing I have realized; it’s not easy being a Malik in Pakistan.

The Maliks of Pakistan are forever surrounded by controversies. Despite stiff competition amongst politicians and artists who struggled to top the “hall of shame, 2011,” guess who has managed to secure the first position once again? Our very own, very dear, very entertaining, Dr Abdul Rehman Malik. To acknowledge his outstanding performance, he has even been awarded a PhD degree by the Syndicate of Karachi University in recognition of his “matchless services to the country.”

Some of his golden words uttered during the year 2011, that range from outlandish to hilarious, are listed as follows:

1) Statement: “If someone insulted Prophet Muhammad (pbuh), I, too, would shoot him”.

Event: On the assassination of Salmaan Taseer. The government responds in a way the authorities are supposed to: by promising the laws would stand, but Rehman  Malik comes up with this bizarre statement instead.

2) Statement: “I am thankful to the Taliban who did not carry out any attack on Shia Muslims and showed respect to their rituals.”

Event: During the event of Ashura, Rehman Malik passed another shocking statement to the media. He actually thanked the Taliban for not attacking Shia processions! And no, he did not stop there. Rehman went on to say that he had appealed to the Taliban, asking them to spare the processions of Shia Muslims, and that he was grateful that they  responded positively to his appeal.

3) Statement: “The Tablighi missionary centre in Raiwaind is the breeding ground for extremism and terrorism in Pakistan as the centre has a major role in brainwashing the extremists.”

Event: Rehman Malik made this statement to the audience at the security think-tank International Institute of Strategic Studies (IISS) while speaking on the topic of ”Countering Extremism in South Asia’.

4) Statement: “If Google and Youtube do not help the Pakistan government, then Pakistan reserves the right to block these services to prevent terrorists from using it”.

Event: The Interior Minister when talking to the media at the FIA headquarters, urged the internet service providers to extend their help to the government for exterminating the menace of terrorism from the country.

5) Statement: “I had given a warning yesterday that there should be no match-fixing. This time I am watching it very closely. If any such thing happens we will take action”.

Event: Before the World Cup semi-final against India, Pakistani cricketers were warned beforehand not to indulge in any match-fixing by the Interior Minister Rehman Malik who said he was keeping a “close watch” on their activities.

Event: Speaking at the National Assembly, Malik denied opposition leader Chaudhry Nisar’s claim that the government was sleeping while the US operation was carried out. He lashed out at PML-N for bringing Bin Laden to Pakistan.

7) Statement: “Extortionists should quit extorting and leave the city”.

Event: Talking to the media after addressing a ceremony held at the Karachi Chamber of Commerce, Interior Minister Rehman Malik warned the extortionists and target killers to quit and leave Karachi else stern action will be taken against them. I bet they were scared.

8) Statement: “When it is reported that 100 people were killed due to target killing, investigations reveal that only 30 were its victims while 70 others died at the hands of their wives or girlfriends.”

Event: During the press conference in Quetta, when target killings were on an all time high in Karachi, the Interior Minister said that the reported figure of deaths due to target killing were not accurate because half the men were killed by the women in their lives. Now that’s some imagination Mr Malik has there. Too many action-thriller films I would say.

9) Statement: “They were wearing black clothes like in Star Wars movies, (one) with (a) suicide vest. They had small beards and two of them were between 20-22 years old while the third who blew himself up was about 25.”

Event: This classic comment erupted from Malik’s mouth when he was talking to the media after the PNS Mehran attack. Our dear Interior Minister came up with another bizarre analogy and compared terrorists’ outfits to Star Wars characters. Told you he was into action flicks and stuff.

10) Statement: “All ground intelligence shows that Ilyas Kashmiri is dead. What I can say is that there is a 98 % chance he is dead”.

Event:  Interior Minister Rehman Malik told the media that although he had no physical proof, he was ’98 % sure’ that senior al Qaeda operative Ilyas Kashmiri was killed in a US drone strike in South Waziristan. Let’s add clairvoyance to his list of countless other outstanding traits, shall we?