Abbottabad has more to offer than Osama bin Laden 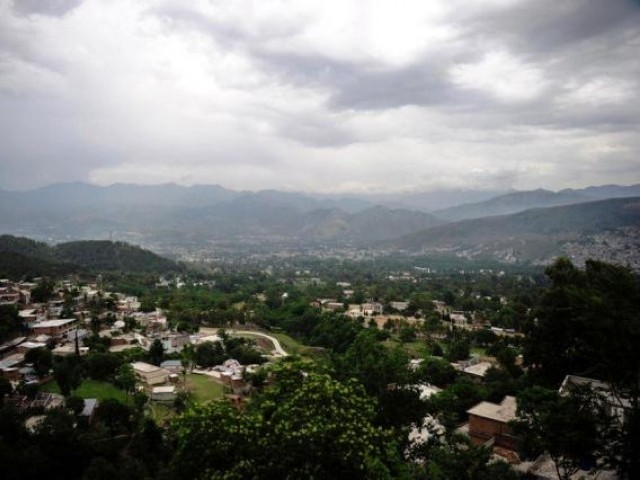 The ambience of the city, with its mountains, lush vistas and greenery will soothe your nerves and calm your senses. PHOTO: AFP

Only months ago, whenever I had to tell anyone that I resided in Abbottabad, I was, more often than not, met with a catatonic pause. Apparently, only geography-buffs knew what this was and even less knew where this was. But then happened the notorious Bin Laden episode, and that spared us the agony of having to go through Abbottabad’s location every single time. However, the dimension of interrogation sported an altogether different angle. Many now seem curious as to what living in Abbottabad is like.

‘Are there other terrorists too?’

‘Do you feel secure?’

These are some of the more common questions I face.

Sure, the Army is no more what it once was, and is doing all it can to distance itself from the masses (building walls, setting up check-posts, and building more walls).

It has been inviting various debates lately as to whether it is protecting the people or protecting itself from the people; still, a little fantasy regarding the Army’s presence isn’t harmful at all.

We are the city of pines

We are also so lovingly known as the city of pines. Though most trees have been savagely chopped off, and the rest are being cut down fast, we aren’t letting go of the title anytime soon.

We have many educational institutions

The city teems with a handsome number of revered schools, colleges and institutes. We boast no less than four medical colleges in a city that ends as soon as it starts. Unbeatable, yes!

We don’t get bombed

About 20 years ago, the people of the city danced with joy whenever they saw cars racing around on the roads. Twenty years later, we’d rather dance with joy if we find any road deserted. The traffic has increased incredulously. Yes, the probability of you being run over by a speeding vehicle cannot be ruled out, but that death is way more palpable than being blown up by bomb blasts, which, thanks to the Almighty, don’t go off here.

We have beautiful, balanced weather

We can play with snow

Yes, we are amongst the few blessed places in a predominantly hot country that still get to play with snowballs and make snowmen. Your childhood has nothing on mine; I went tobogganing and made snow angels. Our elders narrate to us the stories of a time when the city would remain snow-covered for up to six months. Now, we don’t get snowfall even six times a year, but hey, this is still way better than getting no snow at all!

We have lush green vistas

If you suffer from insomnia, depression, or are just a hopeless lover, shifting to Abbottabad would be the sanest thing you’ll ever do in your life. If the ambience of the city, with its mountains, lush vistas and greenery, is unable to soothe your senses, it sure will do one thing – lull you to sleep! Here, sleep is in the air.

We are steady and definitely slow

Unlike the dwellers of major cities (can I please mention Lahore and Karachi?), we don’t walk around as if we have a train to catch. We walk as if we’re meditating. And you must not venture as far as to think that we’re overdosed with opium.

We’re not party to any on-going fashion parade

This is partly, because we aren’t allowed to be. All the reputed brands like ChenOne, JJ, Riverstone, Big, Hang Ten and Outfitters keep on displaying in their Abbottabad outlets the left-overs from their major outlets. Most don’t seem to care. Those who do are eager enough to make the two-and-a- half  hour journey to the capital.

We have accessibility to most things

We take much delight in the fact that we are the proposed capital of a proposed province. And then we will stand proud and brawn in the league of other provincial capitals. And no one will come up with irrational queries or lunatic blabbering about us.