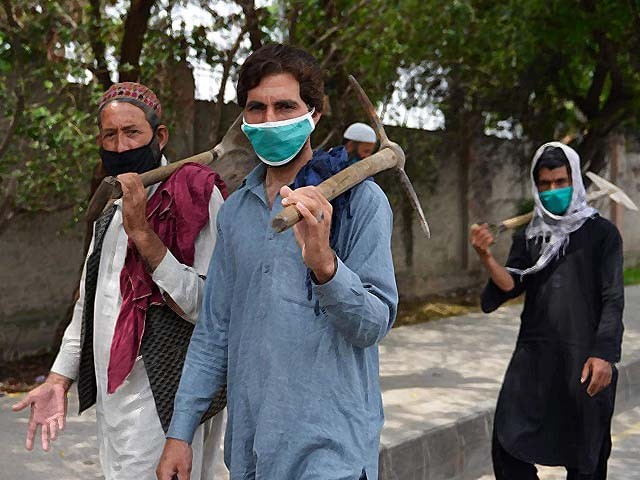 Pakistani labourers walks along a street during a government-imposed lockdown. PHOTO: AFP

We are all at risk of falling prey to Covid-19 but, according to studies, not equally so. Coronavirus appears to pose a higher risk for men than it does for women, and I think we know why. Sarah Hawkes, a professor of global public health at the University College London, has found that men are 50 to 80% more likely to die from coronavirus than women. Let’s unpack this.

There may be biological causes to the increased incidence of Covid-19 among men, as well as the higher fatality rate. For example, studies over the years have shown that women have a stronger immune system than men. This means that women are more vulnerable to disorders involving the immune system going rogue and attacking the body’s own tissues, like in the case of lupus or allergies. But it also means that women are somewhat more resistant to infections due to a stronger immune response.

However, biological reasons alone cannot account for this unevenness between male and female affectees, and behavioral differences must be considered. One of these is smoking. Despite some contradictory news in the recent week, smoking is largely considered to be a major risk factor for coronavirus. Any pre-existing condition putting strain on your lung and heart function is likely to increase mortality risk when it comes to coronavirus. Smoking and alcohol use both cause such a strain, and both are more common among men than they are in women. South Korea, with a two to one ratio of male-to-female deaths, has the second highest smoking rate for men, and lowest smoking rate for women, among the Organisation for Economic Co-operation and Development (OECD) countries.

Additionally, self-care, in general, appears to be something women are better at than men. A 2003 study found that 83% of women wash their hands after using the bathroom, as opposed to only 74% of men. Other studies have shown gaps of up to 25% between hand washing rates of men and women, with the latter being higher. Men also seem to take longer to approach health services when symptoms first appear, as opposed to women who seek help quicker. This is especially concerning when we consider the heightened risk coronavirus poses to men.

Then there are cultural reasons too that seem to account for the difference. In Denmark, women account for a majority of the coronavirus cases, at around 54%. In countries like Iran, the trend is reversed, with women making up 43% of the cases. This is potentially due to the decreased mobility of women in certain Islamic countries, where they are usually confined to domestic duties while men engage more in work outside the home; hence increasing the likelihood of a male member of the household contracting the virus. In Pakistan, the chances of men contracting coronavirus during congregational prayers or taraweeh are also likely to increase since many mosques in the country are not adhering to the coronavirus precautions outlined by the government, although data in this area is somewhat limited for now. Men are also predominantly involved in other activities, like those of the Tableeghi Jamaat, which became a hotbed for the spread of coronavirus in Pakistan.

Furthermore, ‘masculinity’, in its conventional sense, is often associated with increased risk-taking. There is an unmistakable masculine allure to sitting out in a public space in a light T-shirt, a lit cigarette in hand, and casual indifference towards forces, natural or otherwise, that can cause bodily harm. Compare this behavior to an average woman who is often acutely aware of her physical space and social surroundings, occasionally glancing over her shoulders, clinging on to a purse in which it wouldn’t be unusual to find sanitary products like hand gels or wet tissues.

Much of the public harm we face stems from senseless bravado; which in turn comes from toxic masculinity, closely linked to ultra-nationalism or a misguided religiosity. How many people have we personally seen scoffing at the lockdown, implying that hiding ourselves from the virus is a form of cowardice? This attitude is not specific to Pakistan, and is just as easily reflected in the sermons of American right-wing pundits – again, mostly men – offering to bravely sacrifice themselves at the altar of the free market economy.

The best place to test a piece of armour is the battlefield. Coronavirus lays bare every chink in our socio-cultural chain mail. It challenges our perspective on different behaviors and lifestyles, and whether these choices are objectively wise or foolish. In this regard, it would be unfortunate to let this crisis go to waste.