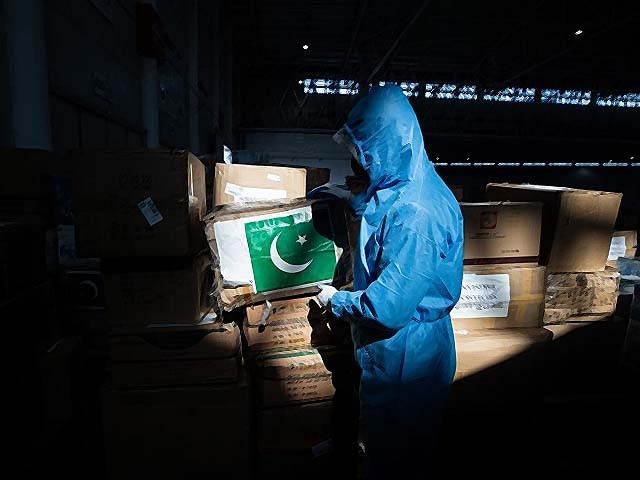 A staff member carrying a box of medical supplies from Pakistan at a warehouse in Wuhan. PHOTO: AFP

Despite the numerous supply-chain disruptions experienced due to environmental catastrophes in the last decade — including the eruption of a volcano in Iceland, the Japanese earthquake and tsunami etc. — most well established companies were still caught off guard by Covid-19 and unprepared to adapt accordingly. But coronavirus is not the first, nor will it be the last, major disruptor of global value chains. Organisations around the world have fabricated a global value chain that runs on outsourcing and thin margins (mostly in China), and the coronavirus has exposed just how fragile this process is. As Covid-19 jolts the world economy, it is quite possible that it may trigger a change in this very global supply chains system which has been in place for such a long time.

Unsurprisingly, supply chain interruptions have grown in number since the coronavirus outbreak. Quarantined work forces and the paucity of manufacturing components is impacting manufacturers across the globe. The situation might deteriorate further in the second quarter of this year. Companies having global supply chains could anticipate a deferral in the supply of raw materials and merchandise; while freight transport and delivery could become a major concern for some industries.

As the virus spreads across the world, for fear of infection, many people are avoiding shops in city centres and hence restricting their consumption. When a tragedy strikes, everyone suffers: consumers and sellers alike. Therefore, it only makes sense that firms should integrate disruption-related metrics in their evaluations of key suppliers. The swiftness and global blowout of the coronavirus has brought about a gigantic shift in consumer behavior, such as bulk buying of essential commodities while ignoring luxury purchases.

At the same time, the urgency of many global deliveries and essential supplies for coronavirus-affected areas has significantly increased. After the first wave of disruptions from China, the second wave of supply chain disruptions emerged from neighboring South Korea and Japan, when Covid-19 spread its wings to these countries. While the world was still struggling with the supply chain disruption from these three Asian countries, reports of Covid-19 cases began appearing in Europe and America, landing the global manufacturing and value chains in a stressful situation. A United Kingdom (UK) based consultancy firm, Capital Economics, has recently estimated that there may be a 15% drop in global output in the second quarter of 2020 with a possibility of a further escalation.

Another major impact to global business is expected due to a policy change by the large manufacturing industries which may re-evaluate their outsourcing mechanisms, resulting in a re-location of their production sources. Multinational companies are likely to look for the regionalisation of their operations in an attempt to alleviate the risks connected with one central point of manufacturing which, in many cases, is based in China. Soon after the spread of Covid-19 in America and Europe, the first shock these highly developed countries experienced was the realisation that they had no home-based providers for the basic supplies they needed to fight this pandemic. Many of these supplies, including personal protective equipment (PPE), had to come from China.

As a result, public pressure in countries like the United States (US) has begun to surface, calling for the production of essential pharmaceuticals and medical equipment to be moved out of China and brought closer home. But, besides Covid-19, there has been another driving factor behind this policy change. The labour-cost advantage that was once available in China has been consistently diminishing and forcing the US and European manufacturers to move their production base to other countries which can offer cheaper and efficient man power.  A large number of medium sized foreign firms have relocated their operations outside of China and many more are now considering this option. Hence, many garment manufacturers have already shifted their business from China to other countries like Vietnam, Cambodia and Ethiopia. Yet, it is an undeniable fact that the complete shifting of high-technology driven manufacturing from China is easier said than done.

According to Dun and Bradstreet, a business intelligence company, 51,000 companies have one or more direct suppliers in Wuhan, while 5 million companies have one or more tier-two suppliers in the region. The data suggests that it is not just Southeast Asia that is dependent on Chinese suppliers, and the problem appears to be much more widespread. Take for instance the technology giant Apple, which was one of the first major international organisations to inform its stakeholders that it would miss Q1 revenue estimates, in part due to delays in production in its China-based assembly plants. Many companies and corporate gurus are discussing the need to do supply network mapping as a risk-extenuation policy, but they have not done so yet because of the perceived large amount of labour and time required.

Having said that, as per my own recent experience of working in an international organisation, my team and I were assigned to develop global supplier network optimisation using CAR and process mapping methodologies to chart out the company’s supply networks deep into the sub-tiers. Covid-19 had hit the global corporate sector by then. To our amazement, the on-going project somehow helped the organisation to identify areas of improvement and how to remain proactive in addressing crucial issues in order to extract a positive result from our current predicament.

According to a global survey by Bloomberg, a small portion of companies that had invested in mapping of their supply networks before the emergence of the pandemic found themselves in a far better position than those who did not do so. They had a better understanding about the structure of their value chains and how it could be useful for their future planning.

As the calamity takes its course, constrained supply chains, sluggish sales, and reduced margins will combine to add even more pressure on earnings and liquidity. After this emergency, companies and governments will be required to re-asses their value-chain vulnerabilities and save themselves from the shocks they could suffer in the future. Once this crisis passes, we will see businesses fall into one of two categories. The companies that do anything even after Covid-19, hoping that such an upheaval will never happen again. The other organisations will be those which learn a lesson from this crisis and make investments in mapping their supply networks so that they do not have to operate blindly when and if the next crisis strikes. Such organisations will be the winners in the long term. These are unpredictable times but not unpreventable. Only staying vigilant to the forthcoming challenges and drawing better conclusions based on facts can help businesses survive the onslaught of this pandemic and any other catastrophes the future may bring.

The author is a CSCP in an international organisation. He is an active social welfare volunteer. He is also a seasonal photographer, enthusiast cricketer and a music devotee. He tweets @MohammadNavyd (twitter.com/MohammadNavyd).

Pakistan, a nation filled with tolerance and forgiveness