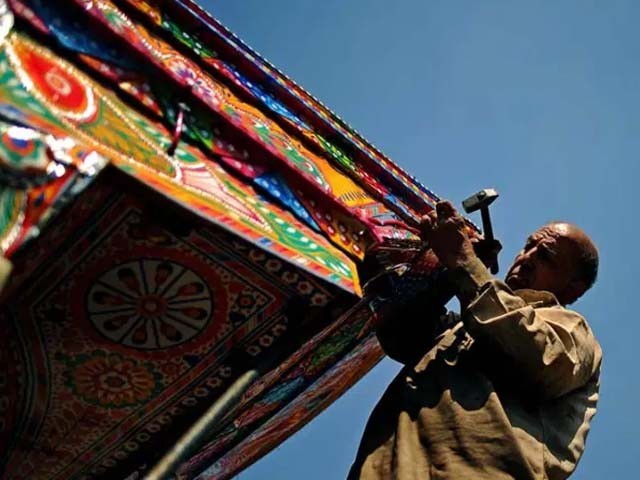 An electrician tacks electrical cables onto a decorated truck at a workshop in Rawalpindi. PHOTO: AFP

Pakistan’s population is estimated to reach almost 340 million by the year 2050, and will hit nearly 400 million at the end of this century. Unfortunately, based on the current systems, it appears that most of these people will struggle to get even a basic school level education, let alone attend universities. Most of Pakistan’s ever-increasing population comprises of working-class people who need hands on skills and blue-collar vocational training in order to survive and compete in a rapidly changing world.

Anyone who lives in the country will know very well that often one is hard pressed to find good technicians, electricians, builders, plumbers, foremen, mechanics, salespeople and all sorts of industrial workers. Pakistan has a growing unemployment problem, and yet has a severe shortage of skilled manpower. There are many reasons behind this deplorable situation. The biggest reason is probably a cultural one. In every country vocational education and the jobs associated with it are at the lower rung of the social hierarchy. This career track is mostly taken up by members of the working class or lower middle-class families. However, in Europe and other developed societies, the status of such jobs, wages and living conditions of workers has improved considerably due to political awareness, several worker rights movements, formalisation of previously informal jobs due to industrialisation, and the high skill nature of many of these jobs in an industrialised and information driven society.

In the Indian subcontinent, however, due to the prevalence of a three millennia old caste system, which is unparalleled in human history for its ugliness and social exclusion, such vocational jobs were always handed down to the members of the lower castes. The most dehumanising work went to the Dalits or the untouchables. A sanitary worker, coal miner, garbage collector, sewage cleaner, foot soldier in the Indian subcontinent will often belong to a lower caste or biradari (social caste). Often times their whole family or tribe will be in the same occupation, working conditions will be unhygienic, unsafe and inhumane, and they will be kept in those “Dirty, Dangerous and Demeaning” jobs for many generations to come without any efforts to improve occupational safety and the status of workers. Hence, this system always ensured the such social stagnation of whole groups of people.

While Pakistan is largely free from formalised caste-based prejudices now, the behaviors and attitudes abundant in Pakistani society are still somewhat informed by a caste-based vocabulary, world view, power distance and the dehumanisation which accompanies it. Names of lower biradris (chora, bhangi, chamar, kumhar, oad) are associated with particular professions, and both the names and professions have negative connotations. Such attitudes lead to little respect for the workers and lack of investment in vocational skills training in Pakistan. The worker thus becomes a dehumanised entity who is there just to perform a specific menial job and must not complain about the social stigma and poor working conditions associated with his profession.

With declining employment opportunities at home, many Pakistanis are trying to leave the country legally or illegally in search of better opportunities abroad. Will it not be better for national pride and dignity of our people that those leaving home for greener pastures have better skills? This will also be an antidote to the pressing problem of unemployment and social restlessness. The world needs qualified healthcare staff, IT/electrical/mechanical technicians, infrastructure workers, hospitality workers, product and fashion designers. By adopting a smarter strategy, Pakistani planners can fulfill this demand by using a locally trained workforce.

Pakistan has several organisational bodies which oversee blue collar training, like the Technical Education and Vocational Training Authority (TEVTA), National Vocational and Technical Training Commission  (NAVTTC), Punjab Skills Development Fund (PSDF) and the Punjab Vocational Training Council (PVTC). The vocational training structure, at least on paper, appears to be good enough; but, in reality, the country has a very shabby and fragmented vocational training system. Most of Pakistan’s blue collar workers learn their work informally and have little to no formal academic education. Whatever vocational structure there is, it has to be democratised and spread to the less developed parts of the country and more investment is needed to hire and train new apprentices.

Another problem is of the acceptance of the training credentials of blue collar workers abroad. While Pakistani university graduates can apply to foreign universities for advanced training on their own, and later find jobs there, it is difficult for Pakistani workers to do so. Agreements with foreign countries are needed to get the qualifications of locally trained workers accepted. Also, bilateral agreements between Pakistani and foreign governments are needed to export manpower to developed economies. The quality of our workers must speak for itself, only then will there be more demand for our vocational workforce. Such trained people can open up new businesses, develop new skills and disseminate this valuable knowledge to society at large.

However, to improve the quality of the imparted training, Pakistan, being a less economically developed nation, has to look towards foreign countries for the adoption of an advanced vocational training system. So, from which model can Pakistan learn the most? Compared to Europe, the United States (US) never had a structured and hierarchical guild based system. This lack of a consolidated vocational training system persists till this very day. In Europe there are different kinds of vocational training models out there, which have their roots in the guild system of the Middle Ages. Within Europe, the German Model of vocational training is considered exemplary and worth emulating, even by other European countries. Therefore, as an example, this model can be studied by Pakistan’s authorities in order to organise the local system along modern lines.

Germany has a dual VET (vocational education training) system. The Board of the Federal Institute for Vocational Education and Training (BIBB) is the advisory board for the central government in all issues relating to vocational education and training. Whereas, the local chambers of commerce (Handwerkskammer) are responsible for coordinating the training at local and regional levels. The costs of the training is borne by the government and the trainees themselves. A major contribution towards the financing of the system is made by the companies providing training themselves. The resultant low levels of youth unemployment means that a very small burden is placed on the social systems and, unlike in many other countries, there is little to no stigma attached with vocational professions in Germany. There are more than three hundred vocational professions to choose from which encompass different areas.

The system offers the right mix of theory and practice, and the fundamental characteristic of the dual system is cooperation with mainly small and medium sized companies on the one hand, and publicly funded vocational schools on the other. This cooperation is regulated by the law. Trainees in the dual system typically spend part of each week at a vocational school and the other part at a company. Businesses that take part in the dual training scheme and consider vocational training to be the best form of personnel recruitment. Companies which provide training not only save on recruitment costs but also avoid the risk of hiring the wrong employee for the job.

This advanced training system also shows that blue collar jobs need not be boring, repetitive and dangerous. Workers can actively take part in continuous workplace improvements, increasing company efficiency, and help in several high tech research and development related activities. The vocational qualification is divided in two tiers. After around three years of training a worker can take up a position available in the job market. If anyone wants to progress more then they have to work for several years and pass additional exams which gives them the title of Technician (techniker) or Master (mesiter). A lot of times technicians can earn more than university graduates. It is not uncommon to find heads of technical departments and CEOs or COOs of German small and mid-size enterprises (SMEs) who are vocational workers who climbed their way up in the corporate hierarchy through hands on work. Similarly, it is also not uncommon to see many German engineers go through vocational training for three years first (instead of opting for high school) and later complete their university education.

To implement such an extensive system in Pakistan would require a societal transformation, regulation of these professions by efficient trade unions, and an overhauling of the job market in order to generate demand for such graduates. Many less developed African countries have already been offered this model for adoption, and there is no reason why Pakistan cannot adopt it too. There is growing awareness across the globe that excellent work-based vocational education and training is vital for fostering competitiveness, egalitarian values and social democracy. Demand from other countries for cooperation with Germany in this area remains high. Germany has launched an online “Apprenticeship Toolbox” to provide support for international decision-makers who want to implement the key principles of the dual apprenticeship scheme.

As the economy of Pakistan develops, with significant involvement of foreign investors, so increases the pressure on the educational system to deliver a qualified, yet flexible workforce. Naturally, therefore, an interest in the dual VET, which offers a quick and sustainable solution, employability, and a better salary, could prove to be vital. Beyond the institutional efforts in improving the Pakistani VET system, attention must be devoted to changing the perception of professional vocational training in general. Indeed, this educational pathway suffers in terms of reputation and therefore is not yet highly regarded by learners, their families, and society at large.

At any given time in the history of all civilisations, working people have always vastly outnumbered the ruling and financial elite; and it is the responsibility of these elite to inculcate in their respective societies a culture centred around acquiring knowledge and skills. Pakistan’s people are enterprising, resilient and show great interest in acquiring new skills, as has been made evident by many encouraging examples. However, raw potential is not a substitute for proper industrial skills-based training. To uplift the ever-growing masses socioeconomically and to also incorporate them in the national and global economy, vocational training in Pakistan needs societal acceptance, a modern skill development road map, and some much needed, sustained support from the government and relevant businesses.