Adoption: Patience is truly a virtue 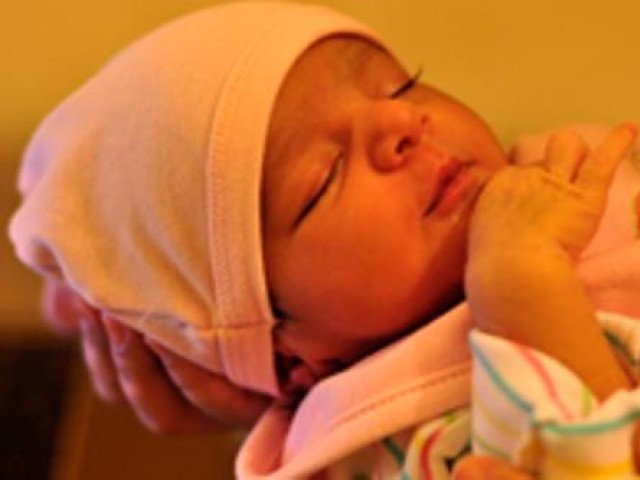 Mehru and I were finally parents of an adorable little angel. PHOTO: ADEEL ANSARI

My wife and I have been married for almost five years now. Like many couples married this long, the yearning for parenthood – the most intense of all human emotions – soon over powered us too.We wanted a baby. We were longing, waiting, yearning for one. We had tried everything. We visited doctors in every city, and they all told us the same thing:

“Nothing is wrong. You just need to be patient”

But that is easier said than done. Friends and family were supportive, yes, but there were days when we couldn’t take it any more. All we could do, at the end of the day, was be patient, like the doctors had asked.

Thus, the days went by, but the pining never eased. One morning, however, with the sound of television and washing machine running in the background, the phone rang at 10 am. This phone call changed our very ordinary weekend to an extraordinary one.

I was lazying around when I heard Mehru, my wife,  screaming in excitement after answering the phone. I ran to her in shock and found her jumping up and down with joy, shouting:

She kept repeating the same sentence over and over, and with each repetition, her voice cracked a little and at last faded into a whisper. I could see tears of joy in her eyes and a smile on her face that I had never seen before. She walked up to me, held my hands and said:

I looked at her and saw a feeling of calm and peace pass over her face. She looked as though the weight of the world had been lifted off her shoulders. The smile on her face translated into a smile on mine. It was easy for me to feel what she was feeling; we had both wanted this so badly that when it actually came true in a matter of days, it was not just surprising for us – it was a miracle by God.

It was November 30 when Mehru and I took a trip to The Edhi Foundation to confirm our adoption registration. We had filed an application a couple of months back and had been contacting the foundation off and on through telephone from Dubai. However, later we felt that it was important to meet them face to face too. Hence we planned a trip to Pakistan.

Sitting there in Edhi’s office, we were skeptical and knew inherently that nothing would happen too soon. We were given the same message that everyone who had filed for an adoption before us, was given:

“The waiting period is two to three years. We don’t have any babies at this moment, but if we do, you’ll be informed. In case we don’t inform you, keep contacting us regularly, but please don’t contact too much either”

The conversation was stale but the optimism was fresh. Mehru and I, feeling determined, left their office after a brief meeting of 15 minutes. We decided to give it all we had. After all, we had a plan; we would constantly keep in touch with them and make sure they recalled our names as soon as we uttered ‘hello’. We planned to make them so tired of hearing our voices that they would have no other choice but to find us a baby.

With our heads full of these thoughts, we returned to Dubai and only a day later we received the most important call of our lives. Our baby daughter, Inaya Adeel Ansari had arrived in this world.

Who was she and how did they find her? These questions weren’t important. All we were interested in was where she was and when could we pick her up. I was finally a father, and my wife a mother; nothing could be more exciting and overwhelming than that.

We had to fly back to Karachi immediately and collect our daughter who was less than a day old. Our friends in Karachi had already brought her to their home, and given her all the love and care that children get the moment they are born; she was  showered, fed milk and put to sleep in a comfortable bed.

Mehru got to hold her first. She finally held our future in her hands and the love that radiated from her mesmerized me. You could be blind and still see the love in Mehru’s eyes for that little angel. The moment she held her, I swear I could see a sigh of relief  escape from Inaya as well – as if she knew her mother was holding her. Tears started to flow from Mehru’s eyes and I knew it was love at first sight.

Then came my turn. After almost 14 hours of anticipation since the call we got, I was finally going to hold my daughter in my arms. I put my arms out to hold her and the moment I did, time stood still. Everything around me was a blur; just me and my daughter existed in that moment in time. Looking at her sleep, hearing every breath she took, brought a sense of calm to my being.

She was real, this moment was real.

All the time I had wondered what it would feel like to hold my baby in my arms, and finally I was finding that out. It was an exhilarating feeling, a memory I wouldn’t trade  for anything in the world.

And then when I thought it couldn’t get any better, the most amazing thing happened; she took her tiny hand and grabbed my finger- it was magical. It felt like my daughter was communicating with me, telling me never to let go, to be always there for her, protect her, care for her and most of all, love her. People say this is a child’s natural instinct to hold on for safety that has been engrained in their DNA but to me it was magical. Give it whatever scientific reason you want but for me it was a communication between my daughter and me. What I felt at that moment is impossible for me to describe, but I do know that I said a silent prayer for my daughter that very moment and saw a hint of a smile on her face. It was all I needed to see and all that I needed to feel.

Five years of waiting had at last come to an end, patience had paid off; Mehru and I were finally parents of an adorable little angel, our Inaya (gift from Allah).

I don’t know if adoption was our only choice, but seeing Inaya in our arms made it all worthwhile. The anxiety of waiting, the constant contact with the agency, the fear that they might not find someone for us;

Yes, it was all worth it.

To view the original version of the blog, please click here.