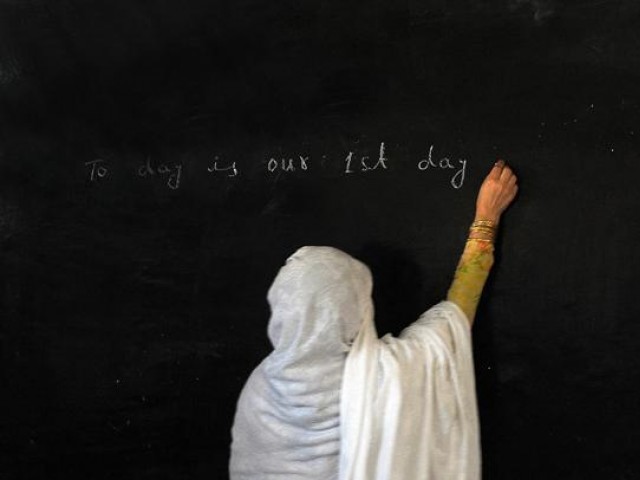 Only good teachers can narrow the gap between the rich and poor students of Pakistan. PHOTO: AFP

Politicians agree that the education system in Pakistan has failed. When they are not arguing about whether or not a section on jihad is necessary, most agree that the country requires more schools and a unified curriculum.

When it comes to education, politicians and bureaucrats love building schools and talking about reform. However, building schools is something tangible and easily achievable; they hang banners, pose for a photograph, pray before an inauguration plaque, and bask gloriously in the satisfaction of constructing a new school. Curriculum reform is also another talking point, but there doesn’t seem to be a lot of agreement on exactly what the end point needs to be after the reform process.

The O’ and A’ Level system is considered the pinnacle of learning for students in Pakistan. The Federal Directorate of Education (FDE) recently announced that it would begin offering O’ and A’ Level classes at some of its schools. It hopes that children from deprived backgrounds will be able to appear in the same examinations as their affluent peers and that this will help bridge the divide between them. Sounds good, but while they have good intentions, implementing such a policy will still not tackle the biggest inequality that children from deprived areas face: lack of equal opportunities.

Offering a different curriculum, as the FDE is proposing, is not going to bridge the gap between students from deprived backgrounds and those from affluent ones. Even if the government schools in Islamabad start offering O’ and A’ Level classes in their colleges, will they be able to attract the same quality of teachers as private schools? Will their labs, library, and computer rooms be well equipped in comparison? Will students from poorer backgrounds be able to afford all the variety of textbooks and guides that are required? Will the parents of such students be able to pay for the same private tutoring that the affluent children can afford? Will students from poorer backgrounds have a handy computer with a decent internet connection available at home to supplement their learning?

Consider this argument in another way- students from affluent backgrounds enjoy not only better access to schools, colleges, teachers and tutors, but also have access to a ready made network of contacts. These can help them in getting internships and job opportunities that students from poorer backgrounds are completely cut off from.

Coming back to our curriculum, there are many improvements that need to be made. The content needs an overhaul based on the needs of tomorrow’s students; not a paranoid security apparatus concerned with inculcating nationalism. However, rather than viewing curriculum reform as an end in itself, it is nothing more than an initial part of a long process.

Two factors that determine good learning and good examination results are the quality of teaching and parental interest. Recently, the example of Karrar Hussain Jaffar’s is one that comes to mind, where he attributes his success to his parents’ encouragement despite the lack of wider aspiration amongst his peers.

In terms of state policy, the government must make massive investments to support and train teachers. Good teaching can support learning even if the curriculum is poor. However, an excellent curriculum with a poor teacher adds little value to a students learning. We already see glimpses of this happening; a recent example is of the One Rupee School in Karachi, whose founder Parveen Rao, emphasises the importance of good teaching and supporting teachers from the local community.

No doubt that exams, certificates, and a foreign curriculum will make a difference, but what Pakistan really needs is good teachers. Students from deprived backgrounds should be able to make the most of their time in school and narrow the gap that exists between them and the children from affluent households. We must move beyond testing and grades.