Why is Pakistan’s religious establishment getting away with lockdown violations? 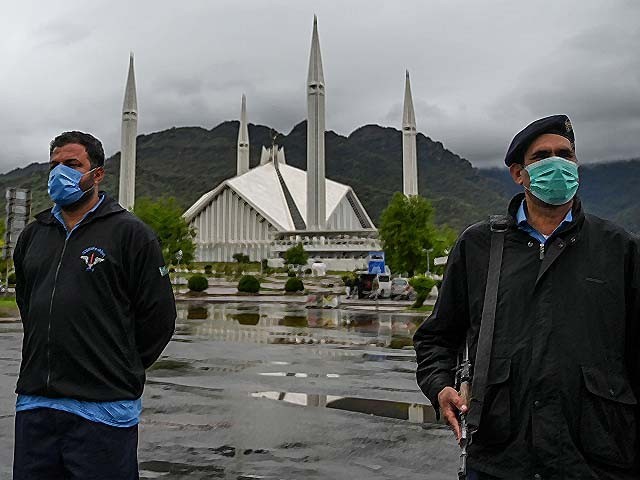 The April 14th decision by some senior ulema and religious scholars to reopen mosques for congregational prayers was highly reckless and disheartening. What has been more disappointing, and certainly far more dangerous, is the federal government’s obvious spinelessness when dealing with this situation. Today, April 17th, saw a few hundred-strong Friday prayer congregation at Islamabad’s Red Mosque, along with other smaller congregations in parts of the country. At a time when ordinary Pakistanis continue to bear the brunt of not just the coronavirus, but also the accompanying economic devastation, these congregations will almost surely exacerbate the situation. For starters, the flouting of social distancing guidelines in such large numbers means an exponential increase in infections and casualties. Equally importantly, the flippancy of the religious establishment will lead to an extended lockdown in the longer run as cases rise, spelling even more economic ruin for Pakistan’s poor.

Given the unprecedented dangers of this crisis, it is extremely irresponsible of the Pakistani state to let these activities take place. Admittedly, the Pakistan Tehreek-e-Insaf (PTI) government has nearly always maintained a subversive attitude to the religious establishment, starting from their withdrawal of the nomination of Atif Mian to the Prime Minister’s Economic Advisory Council to the recent suspension of the film Zindagi Tamasha. But moments of extreme crisis require stronger leadership, and the government’s placatory tone towards those who are putting the people of Pakistan in extreme danger speaks to a serious lack of concern for ordinary lives.

Since the start of the current crisis, the federal government’s response to dissent by the ulema has been desultory. The government has been content to make numerous “requests” to the religious establishment, asking them to keep people at home and away from the mosques. Even when the ulema overtly appeared to be receptive to such requests, the reality was that many mosques across the country were holding daily prayers. Now, with more explicit dissent by the ulema, the need for stronger measures was more obvious than ever and the government has failed to deliver.

The Pakistani state is usually heavy-handed with dissent, even during the current crisis. Case in point, frontline doctors in Quetta were arrested by police just for demanding essential personal protective equipment (PPE). Unfortunately, it seems that the might of the state is only restricted to the country’s ordinary citizens, with the religious establishment enjoying a free reign to do as it wishes at the cost of ordinary lives.

It is not that the government cannot enforce the lockdown on mosques. Past precedent and current events demonstrate that the religious establishment can be made to toe the line. When Tehreek-e-Labaik took to the streets in late 2018 to protest Aasia Bibi’s acquittal, the response was swift and strong. More importantly, the Sindh government has shown that even with a fraction of the resources at the disposal of the center, it is able to ensure that the lockdown was enforced during Friday prayers. Considering the federal government is backed by emergency powers and the might of one of the strongest militaries in the world, it is disappointing to see it back off from imposing the measures necessary to save Pakistani lives.

Why, then, is the federal government so averse to any kind of confrontation with the religious establishment? The obvious answer would be their desire to avoid any kind of unrest in the country. However, given the willingness of large numbers of people to avoid any kind of public gatherings, and the outpouring of public support the government would enjoy if it clamped down on open mosques given the current crisis, the possibility of large-scale unrest is negligible. The Sindh government’s firmer reaction has not just been lauded by large sections of the populace, but the provincial government has also avoided any major unrest. It is not a stretch of the imagination to say that the federal government, with considerably more power, will be able to achieve the same outcomes.

The other explanation, then, is that the government’s failure to strongly respond is political in nature. Already politically vulnerable as a consequence of the JUI-F’s opposition to its rule, the PTI government does not want to add religious groups to its list of enemies and lose the crucial religious vote-bank.

Perhaps more importantly, the government does not want to disrupt the status quo between religious groups and the state. It is commonly known that much of the religious establishment has historically enjoyed the patronage of the state and been complicit in its adventures both inside and outside the country. This relationship is based on a mutual give and take, and thus involves some degree of kowtowing by the civilian government to the wishes of the religious establishment. Maintaining what is perceived to be a strategically beneficial equilibrium may involve risking the lives of ordinary Pakistanis to the coronavirus, and the government seems willing to take that risk.

Unfortunately, the potential disaster looming over Pakistan if such activities continue will cost the government far more in lost lives, lost livelihoods and lost state revenue than any political relationship with the ulema can bring. It is not just naïve, but also highly dangerous that the government has so far turned a blind eye to violations of the lockdown by the religious establishment, contending itself with perfunctory efforts. The consequences of this politicking will be devastating.

The author is a student at New York University. He is a passionate about politics and issues of social justice. He tweets @sobhagadi (twitter.com/sobhagadi?lang=en)

Imran Khan’s gamble: Is ending the lockdown the right move?

#StandWithKashmir: Why India repealing Articles 370 and 35A is a cause for concern

4 reasons Islamabad does not need the metro bus service