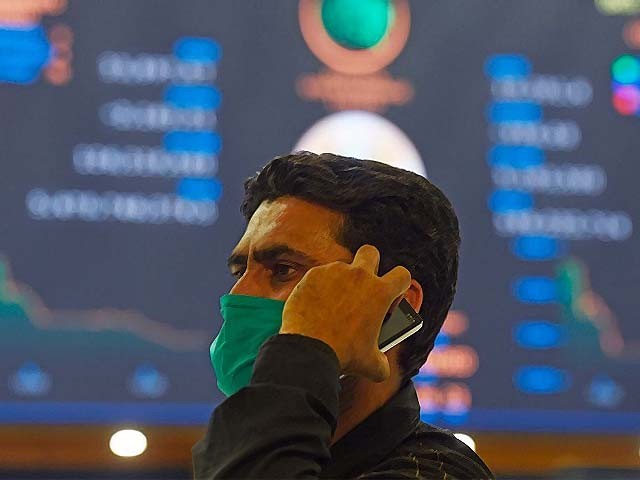 A stockbroker wearing a face mask holds a mobile phone during a trading session. PHOTO: GETTY

As of now, it is abundantly clear that coronavirus has upended textbook economics, global stock markets, currency rates, and unearthed massive socio-economic inequality. Unfortunately, according to the United Nations (UN), Pakistan could be one of the countries hardest hit by the economic fallout which this pandemic is ushering in. The report by the UN Conference on Trade and Development (UNCTAD) postulates that economies of developing countries will,

“Take an enormous hit from high capital outflows, lost export earnings due to falling commodity prices and currency depreciations, with an overall impact likely worse than the 2008 crisis.”

Already reeling from one economic crisis, it looks like Pakistan must now prepare for another one. But what exactly will the economic ramifications of COVID-19 be?

As economies across the globe try to mitigate the financial shocks of this pandemic, Pakistan’s Rs1200 billion relief package is a much smaller percentage of the nation’s gross domestic product (GDP) as compared to packages proposed by other countries. We often cite the inability of the government to offer more, but if not now then when? The natural argument put forward by most is that Pakistan is simply not financially equipped to offer more. Yes, the plunge in economic activity in the country could dent the GDP by an annualised 10%, and the extra spending could increase debt by another 5-7%. The government would, however, naturally recover these debts from already indebted tax-payers after some tepid economic growth. But, in a sense, ‘relief’ was already due; wheat procurement had to happen, tax refunds had to be paid, and the benefit of a decline in oil prices had to be passed on. Thus, in reality, the actual relief is quite less and not enough to stave off further economic decay.

Naturally, government heads are crying out for bail-out packages. However, a blanket default protection scheme would induce a moral hazard since even those companies and individuals capable of repaying the debt could refuse to do so. This could have a cascading impact on financial institutions, and also on the deserving but struggling companies which would be unable to endure the economic burden. The prime minister has called for a provision of cheaper loans to companies which do not lay-off employees, which could partially heal the pain of the pandemic since most blue-collar workers and labourers are not part of the formal sector. Oceans of factories and service providers are still undocumented and thus in danger of being left bereft of any government support. Their earnings are grounding to a halt and so will the sectors dependent upon them, both formal and informal.

Given the severity of the potential economic fallout, Pakistan requires immediate measures which provide social safety-nets. Calls for social distancing will be of little benefit if loans are not restructured, taxes are not reduced, food supplies are not ensured, medicines are not available, and employment is not guaranteed in the post-corona Pakistan. The government has to offer a viable, structured and generous plan to companies and individuals. It is of paramount importance to ensure that sovereign contracts are honoured and not defaulted upon. Keeping the stock market open and enabling foreign debt-investors to pull-out is also a must. The last thing the government would want right now is to lose the trust of businesses, investors and lenders, since they will be the ones re-building the economy.

Additionally, the International Monetary Fund (IMF) programme must also be negotiated to buy another two years in order to bring the fiscal mess under control. Pakistan’s repeated calls for debt relief may sound like impoverished appeals but time must be bought to help slow the decline. Loans offered by the IMF, World Bank and Asian Development Bank (ADB) must be used to maintain the social contract between governments, citizens and businesses. The equilibrium has to be supported to ensure that economies only shoulder a burden which they are capable of enduring. National appeals and economic packages should clearly indicate that the government is helping the masses today so that they can help the government tomorrow. For instance, in the post World War II scenario, the United Kingdom and Germany extracted high revenues to pay off debts incurred during the war. It seems that the economic damage caused by COVID-19 could lead to a similar scenario.

Hence, it is imperative that the government engages in deft economic planning, excessive money printing, recollects taxes over a medium term, gains the confidence of businesses, and retains the partial benefits of decline in oil prices. Given a stable currency and a clearly defined recovery plan, the falling energy prices could save around $4-5 billion every year. Additionally, the construction package offered recently by Prime Minster Imran Khan can help ensure fixed tax regimes for builders and developers, alongside cheaper financing.

Inevitably, as the world recovers from this, old business habits will die and new ones will be born. As global unemployment reaches record highs, Pakistan must act now to chart out a path towards economic recovery. The financially vulnerable must be protected, businesses must be given bailout packages and then taxed later, while the economy should receive greater fiscal stimuli. As Pakistan slowly opens up certain industries in the hope that the beleaguered economy will limp back to life, the state must carry out a difficult balancing act. Given that the IMF projects that Pakistan’s economy may contract by 1.5% in this fiscal year, the country’s policymakers must be prepared to deal with this looming crisis.