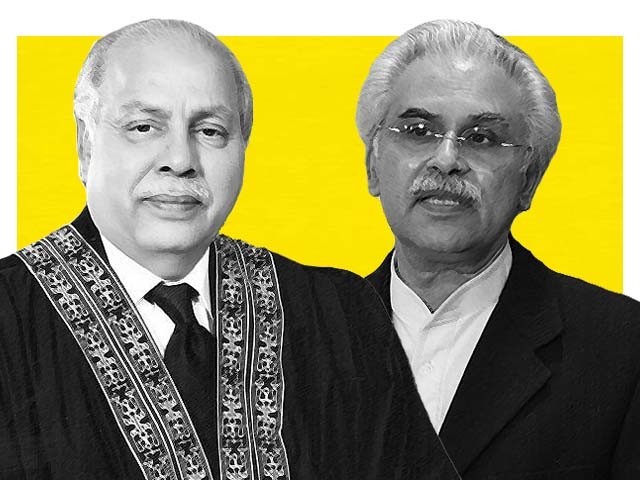 It was not too long ago when Iftikhar Chaudhry, while he was Chief Justice of Pakistan (CJP), fuelled the judicial activism that virtually paralysed the then federal government of the Pakistan Peoples Party (PPP). Then came another period of judicial activism when former CJP Mian Saqib Nisar’s obsession with suo motu notices crippled the Pakistan Muslim League-Nawaz (PML-N) government. Elected prime ministers like Yousaf Raza Gillani and Nawaz Sharif were sent home due to decisions which some consider to be weak and prejudiced. Asif Saeed Khosa in his tenure showed restraint in this regard, until he took suo motu action against the extension in the tenure of Chief of Army Staff (COAS) General Qamar Javed Bajwa. Previously, the leadership of Pakistan Tehreek-e-Insaf (PTI) and a certain section of the press and electronic media not only openly supported the judicial activism that undermined democratic governments but also used the courts’ remarks and judgments to undercut main centrist parties like PPP and PML-N. Perhaps many in the PTI ranks, and even in our field of journalism, forgot that what goes around eventually comes around.

In a recent hearing of a suo motu case regarding COVID-19 and the government performance during this pandemic, CJP Gulzar Ahmed in his remarks criticised the federal and provincial governments for their failure to adopt satisfactory measures, stating,

“Advisors have been given status of federal ministers but despite this larger number of advisers, there is no betterment in the federal government performance to deal with the pandemic.”

“The situation of this magnitude demands consensus and uniformity, but the provincial governments are going in a different direction, while the central government on the other.”

The five judge bench was also sceptical of the performance of Special Assistant to the Prime Minister (SAPM) on Health Dr Zafar Mirza. Reportedly, the Supreme Court considered issuing a directive which called for the removal of Mirza, however the bench then decided against it when Attorney General Khalid Jawed Khan argued that such a directive during a crisis would only further complicate the situation. The bench also levied criticism at Prime Minister Imran Khan, at the size of the federal cabinet and raised various other issues. Now, in any genuine democracy, the court has no mandate to intervene in the administrative affairs of the provincial or federal governments, nor should it come this close to ordering the removal of any advisor or a minister, nor should it pass comments about the performance of an elected government. But naturally all this is fair game in Pakistan.

Here the invisible forces that run the show orchestrate the strings of political discourse from behind the curtains. It was Article 58-2( B) that was used in the 1990s to send disobedient prime ministers packing, while prior to that direct interventions were the shield of choice. However, when the 18th amendment regarding provincial autonomy was passed, it became impossible to intervene directly. As a result, the judiciary was used as the new tool to malign elected governments and send elected prime ministers packing. Sadly, despite the service of brave and honest judges like Justice Qazi Faez Isa, Pakistan’s judiciary has been giving a shoulder to the invisible forces to undermine the elected leadership.

As prime minister, Khan has every right to appoint anyone as his advisor or as a minister as long as the person appointed is not found guilty of any misconduct in a court of law. Similarly, the likes of Mirza, despite allegations of exporting face masks during this pandemic, cannot be declared corrupt unless the charges are proven in a court of law after an impartial inquiry. It is the job of journalists and analysts to pinpoint nepotism in the appointments of advisors or ministers, or to comment upon the incompetency of elected governments. The court has no mandate to criticise an elected government for under-performing or to speculate upon possible corruption without any charges being proven. The Supreme Court must stick to only interpreting the law.

Mirza may well have his flaws but, at a time when the country is battling a deadly pandemic, the Supreme Court should avoid considering the removal of one of the generals leading this fight. It will only result in further confusion since any new advisor or minister appointed during this time will take their time to establish their team and to understand the standard operating procedures. Mirza has been monitoring the arrival of this pandemic in Pakistan since the start and, to be honest, he comes across as one of the saner voices in the federal cabinet, despite the charges of exporting face masks and alleged nepotism. We must understand that time is the most critical element in the battle against COVID-19, and Pakistan can’t afford anymore lapses on this front.

With hundreds of thousands of cases pending in the higher and lower courts, the honourable CJP should instead focus his time and energy on developing a mechanism to address these cases first. Ultimately, judicial activism has has only contributed to the uncertainty and political turmoil in the country. The masses who elect their representatives expect the other pillars of state to respect their mandate. When these pillars start intervening in other domains then the ultimate losers are the masses, the state, and democracy itself.

On the other hand, PTI and some journalists need to learn that what is wrong is wrong, regardless of who the instigator is and who is at the receiving end. Many PTI leaders once used to cherish the activism of Chaudhry and Nisar, but now they are coming perilously close to getting a taste of their own medicine. The office of the prime minister or the parliament does not belong to any individual or political party; they belong to the state and they should be strengthened without any bias or political affiliation by not endorsing unnecessary judicial activism or any other act that undermines them. The elected leaders, after all, are answerable to their voters for every decision and every appointment they make. Intervention in the domain of the elected government only weakens the democratic process and leads to a vicious cycle of rigged political discourse and controlled democracy. Judicial activism during a pandemic will only make things more difficult for the federal government. Hopefully, not only on this occasion but also in future, the elected leadership of the country will not be criticised openly by the courts and their decisions will not be questioned unless charges levied against them in a court of law have been proven.