Covid-19 infects neoliberalism: Is the state making a comeback? – Part I 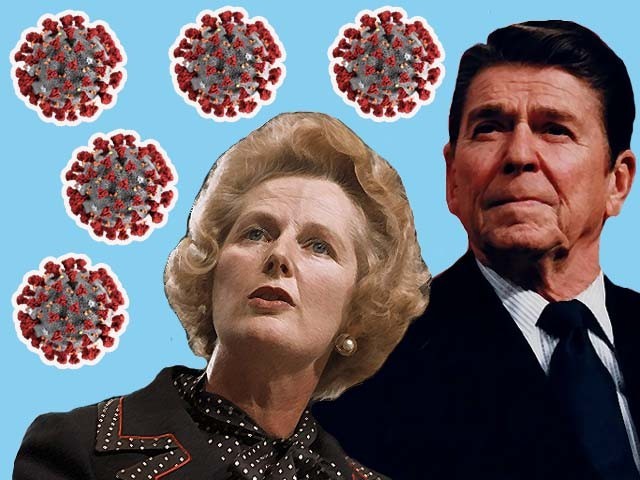 Once the climate crisis precipitated a raging atmosphere of adversity towards neoliberalism, it’s the novel coronavirus that is now transmuting neoliberalism’s left-wing critique into a pandemic like itself. To provide some context, if the reigning order of the world system could be defined in two words, the politically popular and pontifical phrase, economic liberalism, otherwise called liberal capitalism, would be it. It’s philosophe-architect, the neoclassical Chicago School of Economics, perhaps did not know in the 1930s that it was designing an ideological leviathan that no one would be able to beat by the turn of the century – largely because the leviathan would wrap its tentacles around the erstwhile powerful State, and cannibalise its functions one-by-one.

While writing against Ricardian economics in mid-19th century, classical German sociologist Karl Marx addresses the question of state in severe, antipathetic terms, reducing it merely to a “committee” that manages “the common affairs of the bourgeoisie.” Today, the bourgeoise that confronts our world, a titan known as corporate capitalism, is unlike any other; its power and transnational dominion is of epic proportions. Hitherto, even the United States (US), arguably the strongest state in the world, has been co-opted by this titan – an occurrence foreshadowed by the 32nd president of the US, Franklin D. Roosevelt:

“The liberty of a democracy is not safe if the people tolerate the growth of private power to a point where it becomes stronger than their democratic state itself.” – Recommendation to Congress, 1938.

It was the stagflation of the 1970s that eventuated Roosevelt’s precursory warning and accounted for a paradigm shift from the Keynesian welfare consensus to the neoliberal world order. Overnight, laissez-faire economics, privatisation, unfettered markets, and a minimalist state became the leading chants of the conservative ideologue, called the New Right. This is the fanatic doctrinaire that would demand the state to roll back from the market and in doing so transform its function, from serving the public interest to servicing corporate interests.

Before my argument is assaulted by pupils of mainstream economics and gets robbed off its merit, I acknowledge that neoliberalism, like any other system has its virtues, albeit very few in light of its spectacularly lopsided economic rewards. My problem with neoliberalism is its infallible ‘one size perfectly fits all’ presentation. A philosophy which advanced on the back of the Reaganite and Thatcherite state-project and soon became a dogmatic creed – an incontestable gospel-truth – that in reality hid a grim picture of a state. A picture of an undeniable transformation, from a republican democracy into a committee which in fact does relentlessly manage the affairs of its master. Is this state then truly democratic? The answer is yes. The answer is also a myth, the most consequential lie created by politics of the New Right.

In other, more assertive words, what does being a neoliberal state mean in a ‘republican democracy?’ The short answer is that such a state is neither democratic nor a republic. It’s a corporatocracy. It supports the dictatorial reign of its master at the social, economic and environmental expense and injury of its people. Neoliberal economies do not believe in public good and hence cannot maintain a so-called “government of the people…for the people.”

What COVID-19 callously smashes is the myth of neoliberalism’s marriage with democratic-republicanism. In reality it is not a union of marital bliss but of two incompatible spouses where one regularly abuses the other; I call it a dysfunctional relationship, a match not made in heaven but in the cabinets of Ronald Reagan and Margaret Thatcher, as per the dictates of their corporate masters.

The new right’s ‘neo-republican’ mandate dismantled the system of public welfare and today, when health care and social protection systems in the West are falling short in buffering the pandemic’s calamities, one realises how un-republican, and narrow the whole neoliberal scheme really was. There was no increment in public healthcare expenditure, within the Organisation for Economic Co-operation and Development (OECD) countries between 2013 and 2017. America’s lead in health expenditure, an approximate 16.9% of its GDP in 2018, is actually a result of private health expenditure. To this end, People’s Policy Project rightfully points out that “private social spending is not really social spending” and it does not have any consequential impact on alleviating poverty. For decades, industries such as healthcare which relate to safety nets and overall public welfare were rigorously privatised under the neoliberal mandate. As the coronavirus uproots socio-economic life across the globe, states are now scrambling to rebuild or strengthen some form of reliable, resilient social protection systems.

A crisis is a litmus test for a system’s resilience. In the case of COVID-19, market forces have proven themselves irrelevant and incapable of providing a solution. But isn’t the autonomous market a progressive, messianic force that carries a society forward? Seemingly not. In fact, in the wake of COVID-19, it is not only the first institution to collapse and fall apart but its survival also depends on the very state that neoliberalism demanded to recede in a massive roll back!

In effect, while the epidemic’s soaring wave sweeps off the private system of social spending, the state is riding high on it and making its comeback within public welfare – after half a century.

Previously I wrote about the alliance of closed borders and emergency powers, which accords colossal importance to the state and accounts for an authoritarian turn in governance. This is also a neoliberal’s nightmare. Fortunately, for the Reds – social democrats and socialists alike – the nightmare has only begun to unfold. The Economist has reported a projected 2% increase in global GDP on government spending, reportedly, the highest ever. Central banks around the world, including the US Federal Reserve, which itself was founded as a result of a compromise between the competing public-private interests, have reduced interest rates.

Moreover, unlike any other economic crisis where the state is silent (or complicit) to layoffs and the characteristic austerity measures, the State is now actively trying to stop unemployment or wage-cuts by funnelling hefty sums of money through stimulus packages. The US stimulus package, amounting to a staggering $2 trillion is the largest bailout in the country’s history. In a shocking turn of events, when Thomas Massie opposed the excessive public spending in the Congress, he was not only overruled but also rebuked by Trump as a “grandstander.”

Economic recessions have always been a critical junction, a crucial driver of history. They challenge the fabled inventions of the reigning economic order and mostly result in a new form of consensus. The Great Depression resulted in the reign of the Keynesian economic system, which was uprooted by the stagflation crisis of 1970s and replaced by neoliberalism. At present, the renaissance and reemergence of the state is helmed as a revolutionary moment in economic policy-making. What then is the future of neoliberalism? Will the state continue to radically intervene in the economy? Seemingly, things are turning up for the left and here is why:

“Forces encouraging governments to retain and expand economic control are stronger than the forces encouraging them to relinquish it, meaning that a ‘temporary’ expansion of state power tends to become permanent.”