How Khyber Pakhtunkhwa is coping with COVID-19 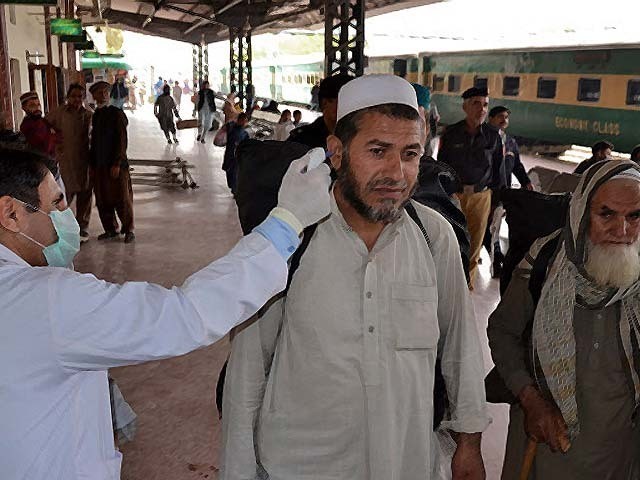 A health official checks the body temperature of a passenger at a railway station in Peshawar. PHOTO: GETTY

The rapid increase in cases of COVID-19 forced the Government of Khyber Pakhtunkhwa (K-P) to declare a health emergency and order a provincial lockdown, while citizens were ordered to self-quarantine and observe social distancing, much like the rest of Pakistan. The sudden declaration, followed by an immediate lockdown, coupled with media reports that update figures by the hour, the amount of panic and fear among the people is palpable. But the reason behind the panic can differ from person to person, depending on the financial stability of their household.

For some, just accessing basic necessities has become a problem, as when the initial lockdown was announced, some people started hoarding while others did not pay heed to the seriousness of the situation and were greeted by empty stores later. Some did not have the luxury to stock up on items as their financial situations did not allow them to do so.  Even though shops have since then been restocked, some of them are selling basic food goods at exuberant prices, adding to the dilemma of many. The situation is particularly bad for those on daily wages.

Despite repeated government warnings, pharmacies are withholding basic protective masks and sanitizers, only to sell them at high prices, while some mill owners were even caught deeming flour to be at a different quality than it was.  Furthermore it is being reported that prices for basic commodities have gone up by 10 to 15 per cent. In Peshawar, the prices of pulses, flour, beef and sugarcane have all been increased by Rs20 to 30 per kilogramme without an approval from the district administration. Prices of ghee (clarified butter), lentils and sugar have also been increased.

To the federal government’s credit, it has announced relief programmes, while the K-P government has also announced a relief package that allocates Rs11.40 billion for 1.9 million households. This will include at least 43% of K-P’s population considered to be vulnerable. Such packages take time to be dispensed, especially when the scale is this large and till the logistics are figured out, many people are sleeping hungry.

This is despite the fact that many good Samaritans have launched private fundraising drives and are donating not only money but in some cases ration and even hand sanitizers to those in need. The K-P government was also not ready for the rapid shutdown of businesses and many labourers have been left in a lurch. Where the Sindh government imposed the Sindh Epidemic Diseases Act, 2014 and announced that no one shall lay off workers, while offering them paid leaves, regrettably, K-P did not take similar steps.  Reports have since then surfaced about private hospitals allegedly cutting wages and not treating their own nurses who contracted coronavirus.

Then there was a doctor, who to register the serious lack of personal protective equipment (PPE), staged photographs of himself attending to a patient in a polythene bag. Even though the pictures were fake, they also highlighted a stark reality, that there is not enough PPE to go around, which is like sentencing our doctors to getting the virus. This problem is unfortunately being faced all over the world.

Despite the measures taken by the government, there is a serious lack of implementation even from the general public and we do not seem to be learning from other countries that turned into horrific tragedies. Mosques were being frequented till March 31st, when a ban was imposed, while social distancing is being maintained in the cities, the district administration is having a hard time locking down villages and discouraging them from holding social gatherings. During these hard times we must act as responsible citizens and play our part in restricting the virus as much as we can, lest we also face a situation like Italy’s. As William Shakespeare said in his play Hamlet,

“When sorrows come, they come not single spies but in battalions.”

We must limit the damage the coronavirus battalions cause by putting up a united front, where we play our part by staying indoors, washing hands and listening to government directives, especially when it comes to selling commodities. This is also a time to strengthen our community and donate freely for those who maybe having a much harder time than us during these unprecedented times, while it is perhaps time for the provincial government to reassess systems, especially those employed to look after the less fortunate.

The author is a lawyer and a human rights activist based in Peshawar. He tweets @NoumanMuhib (twitter.com/NoumanMuhib)

Should Pakistan release its prisoners during the coronavirus pandemic?

Hooz Noor: Another reminder that we continue to fail our children