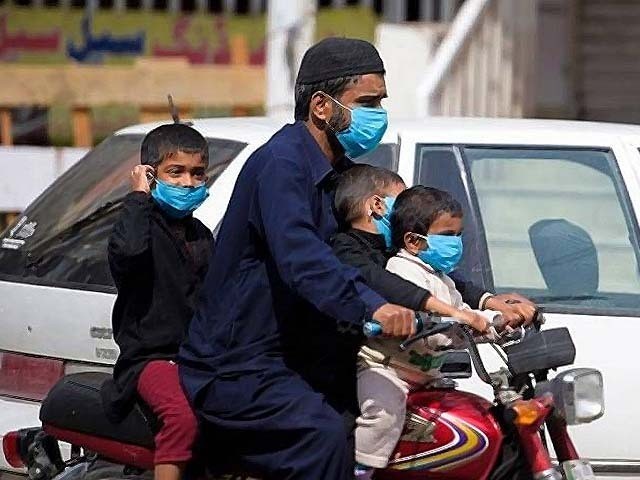 A man and his children adorn face masks as they ride a motorcycle during a government imposed lockdown. PHOTO: GETTY

Temporary actions and policies during times of crisis become die-hard habits in the post crisis normalcy. People, governments, and corporations adopt certain temporary and desperate measures to deal with the situation at hand but later those half measures become full and achieve a permanence that hardly anyone is able to predict in times of crisis.

When the 2008 financial crisis happened, several companies around the world laid off many employees in order to cut costs. Many went bankrupt. During the crisis, many companies made their employees do more work for the same emolument and the workforce agreed to put up with the more work and less pay because the fear of job insecurity was a stronger threat than work fatigue. They had seen their colleagues being laid off and it was not difficult to fathom that the job market was precarious at best. Employees put up with any working conditions and working hours for the same or declining pay.

Once the crisis was over and the economy got back to its feet, businesses saw their revenues and profits return. However, all the lost jobs did not return. Only a fraction of those jobs came back. Companies during the crisis developed the habit of making their employees do more and multiple tasks. They developed the art of reducing the workforce yet increasing work. That became the norm after the financial crisis. The business world never went back to the pre-2008 financial crisis situation. Hence, specialised labour turned into a multi tasking workforce.

When 9/11 happened, America wanted revenge and the law to take that revenge globally was quickly and overwhelmingly passed in the Congress with bipartisan support. A series of similar laws to fight terrorism were enacted allowing the United States (US) government to spy on its own citizens and store those communications data for perpetuity without a warrant. Such laws and policies developed during the 9/11 crisis also enabled the American government to detain and imprison people around the world, including US citizens that it suspected of having ties to terrorism.

The world found out that the cell phone and internet service providers willingly allowed the US government access to Americans’ communications, all in the name of national security. Every desperate measure to stop the next attack on America became an ingrained habit of the US government. What is even worse is that the American people accepted the justification of anything in the name of fighting terror. Such a rationalisation on part of the American people became their permanent habit. Everybody expects and accepts their credit card purchases to be monitored, their data to be sold by Facebook, their minds to be manipulated by companies such as Cambridge Analytica, their data to be used by companies to target them for advertisement purposes, and so forth.

Today, we live in a world heavily occupied with a new crisis. The coronavirus has engulfed the entire world and is quite democratic in that it shows no discrimination. It equally targets people of all colors, statuses, nationalities, professions, and so forth. It is the sort of crisis that was always and only confined to science fiction movies. Sadly, it is now our reality.

As a result of the economic crunch brought about by the pandemic, many companies around the world right now are downsizing. Only a small workforce is retained, which is either working from home or else overworking in a super busy buying frenzy. The multi tasking and over tasking employees right now would be expected to do the same after this is over, which would mean that some of these jobs are lost permanently. Similarly, the work from home is cheaper for companies because there are no office overhead charges. I do a side interpreting job in America for various healthcare facilities. Now with stay at home as our new normal, new companies have sprung up that ask us to do the same job over the phone, except that the wage has halved for the interpreter. Once normalcy returns, companies will stick with phone interpreters because they can target a larger market all across the US with a cheaper employee and no office and other expenses.

The same is true across the board. For instance, universities and colleges are going online to teach courses. The trend was there but it has been accelerated due to the pandemic. It would hardly be a surprise if it remains online post-pandemic. That would mean losing jobs for many people who usually work at an educational facility. Test conducting companies will emerge trying to get a piece of the pie. Employees would see that bite taken out of their pay-cheques for the so-called mandatory tests. That would mean less money for them to spend.

Similarly, the entertainment industry, especially the newly resurrected Pakistani film industry, will absolutely face a setback. Movie goers will prefer to watch movies at home for a long time to come. Movie makers will have to negotiate a term with streaming companies, and they wouldn’t be bargaining from a position of strength. The same exploitation of the weaker will trickle down to the very bottom of the society. The potential tectonic shift will create some millionaires and billionaires but will render many jobless. It could further dwindle the middle class by widening the gap between the new tech millionaires and those new poor who wouldn’t catch up. There would be winners and losers, which is good for sports but not for an economy and a society.

One of the things people have been discussing recently is that the earth is healing itself since there is less activity and less pollution now since the world has come to a standstill. Therefore, it will be interesting to note the long term environmental impact of this pandemic. But beyond the economic and societal repercussions, my hope is for us all to develop greater humanity during this crisis. The lethality of this novel coronavirus will be a thing of the past someday, but how we behave now could shape the future of who we become.

I hope we develop more compassion. I hope we will help those around us who can die of hunger long before the virus can get to them. I hope that we develop the habit of paying attention to the more meaningful things in life. And I seriously hope and pray that the humanity we achieve during this crisis stays with us in our post-corona lives. This is more a test of our character than of our immune system. I hope and pray that we achieve strength in both.