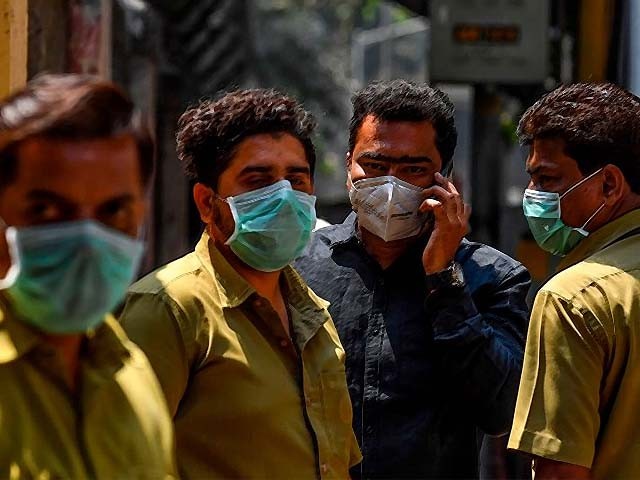 People wearing face masks in India amid concerns over the spread of the COVID-19. PHOTO: GETTY

India has suddenly fallen silent. Some of the prominent cities where life never stops have come to a standstill. The chants of endless community prayers have ceased. An eerie silence pervades the country ever since the nationwide lockdown was declared on March 24th. However, beyond the surface of this deepening quiet is a disquiet and the sense of unease over the success of this unprecedented lockdown. Never before in the annals of human history have 1.3 billion people been confined to their homes like Indians are today in an attempt to contain the spread of the novel coronavirus (COVID 19).

Today the situation is such that if someone wants to travel from a village to a nearby city they cannot go because all modes of transport have been cut. Borders are sealed and the administrative authorities do not allow any kind of unnecessary mobility. Hence, India has become a nation of islands today. A section of Indian thinkers and public intellectuals were already demanding a complete lockdown for more than two weeks. They were warning the government that if the state failed to respond quickly then we would be staring at the same fate as Italy, Spain and the United States (US). Some researchers believe that India might have done well in containing the spread of the virus, but the country could still witness millions of COVID-19 cases by mid May.

Additionally, it would be great a challenge to test all of the Indian residents who have recently travelled abroad. According to researchers from the COV-IND-19 Study Group, an interdisciplinary group of scholars and data scientists, “the frequency of testing has been very low in India as only 11,500 subjects have been tested as of March 18th.” They warn that if the virus enters phase two or phase three in India then the escalation in cases would have devastating consequences on the country’s already overstretched healthcare system.

So far, over 900 coronavirus cases have surfaced in India and the total number of casualties is at 20, for now. The figure itself is not discomforting, but the fact that everyday there has been an addition of more than 50 cases from different parts of India is not reassuring either. Compared to the demography and size of the country the figure is quite modest. However, many experts believe that the number should not give us a false sense of satisfaction as the number of people tested thus far is too low to reflect the reality of the crisis in India.

Simultaneously, India faces a challenge on another front too. As a result of the lockdown the socio-economic fault lines of the country have become glaringly evident. While the majority of the middle class is reconciled to a relatively inactive life spent in self isolation till the lockdown ends, the economically marginalised are staring at a future where they only see uncertainty. They are not sure whether they can survive the lockdown and the consequent economic consequences.

Hundreds of daily wage workers are stuck in different cities and are struggling to survive in the absence of any support. Given the severity of the lockdown, temporary arrangements are not going to solve their problems. Small farmers and workers in rural areas are also under great risk of losing their livelihood. In an attempt to combat this the government has announced free ration for them for the next three months.

Ultimately, the coronavirus crisis is a test of India’s political leadership. But as of now it is too early to assess the performance of the government and how competent it has been in handling one of the worst crises that any government in India has faced since independence. There is no doubt the government is taking it seriously and understands that if the situation gets out of hand then India will be faced with an unspeakable tragedy. But one thing that the present crisis tells us loud and clear is how inadequate our medical infrastructure is.

I am stuck in a small place called Mokama in Eastern India’s Bihar state. This small city of a little more than 100,000 people does not have a single government hospital with a ventilator. An old private hospital called Nazareth Hospital is the only hope here if there is a medical emergency. But unfortunately, Mokama is not an exception and reflects a situation which is common in much of North India. The government has been cutting down the health budget since 2014 and privatising medical care with great speed. As a result, COVID-19 is testing not just individual resilience but also the resilience of the nation and its preparedness to deal with a crisis which is worse than a war.