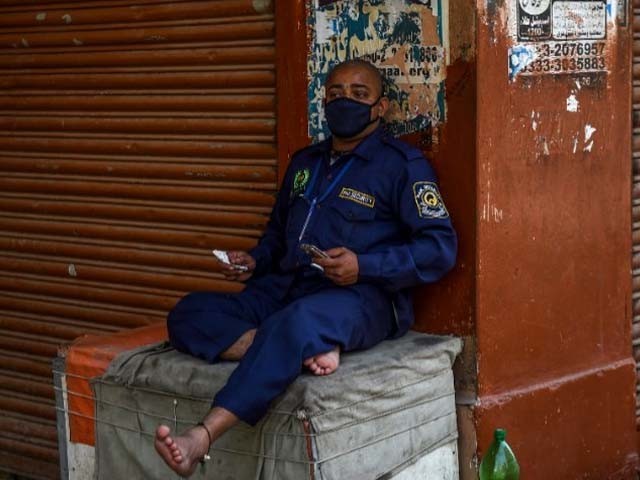 A security guard sits in the area of a shuttered market in Karachi. PHOTO: GETTY

We often see the chicken and the egg problem in political systems; chronically bad leaders and a cynical populace coexist in mutual contempt. In this scenario, if a leader tries to do good, the population is ill-equipped to recognise it because, like a snarling, abused street dog, it has known only ill treatment and neglect.

Such has been the case in Karachi during the recent weeks.

Unused to leaders leading or, indeed, fulfilling even the basic requirements of governance, Karachiites have been treated to the unfamiliar sight of the Sindh government taking proactive measures against the COVID-19 menace.

From the prescient decision to shut down schools on February 27th upon diagnosis of the first two cases in Karachi, to a barrage of subsequent measures ranging from setting up health screening desks at the airport, to arranging quarantine facilities and expanding testing capacity, to the closure of Sindh government offices, parks, dine-in restaurants, shops and malls and ensuring uninterrupted utility services, the government has shown itself to be alert and responsive.  These measures have culminated in the announcement of a much–needed 15-day lockdown.

Each step has been communicated clearly to the public from the horse’s mouth, as it were; regular tweets from officials have left little scope for the usual wild rumour-mongering or panic.

As chronically neglected Karachiites, this efficiency has confused us. Initially, there was some immediate backlash, ranging from sarcasm to scepticism to hostility, from some parents of school-going children, business owners, analysts, keyboard warriors and a lot of person on the street, all second guessing the official approach. Even some overseas Karachiites, who are often ‘more loyal than the king’, aggressively questioned the sanity of these steps, quite ignoring the complete lack of measures taken by their own, adopted governments in North America and Europe at the time.

To make matters even more confusing, the federal government, self-touted symbol of all things new, dynamic, and forward looking, appeared to be strumming its sitar instead of applying itself to limiting the spread of the virus. “Don’t panic” does not a pandemic policy maketh.

Gradually, Karachiites have been forced to acknowledge the praiseworthy efforts of the provincial leadership. Positive feedback has also trickled in from the rest of the country, even from the unlikeliest of people. Hand in hand with these public trust issues has been the problem of convincing our elders to take the situation seriously, perfectly summed up in the following viral meme:

This parental resistance appears to be a worldwide issue – journalists have bemoaned the blithe responses of their own parents in hilariously relatable articles. In Karachi, our older generation has weathered violence, extortion, terrorism, kidnapping, street crime, water shortages, power outages, broken roads and filthy neighbourhoods for the last three decades. As a result, even the under 60s look like they’re 70+. Worse, they have attitudes that can only be described as frankly psychotic (or badass, depending on your point of view).  If a tsunami is about to hit, they’ll take their families to Sea View to welcome it. And if coronavirus is burning through the city, they’ll go pray Jummah (congregational prayers) crammed with hundreds of possibly coronavirus-infected strangers – all praying, ironically, for an end to coronavirus.

While we have been treated to the unique spectacle of self-isolating Hollywood celebrities instagramming from within their mansions – unkempt, unshaven, bored and without professionally styled hair and makeup – our parents have continued to pop next door for neighbourly coffees, take evening walks with friends, and haggle with the corner fruitwallah (fruit vendor). Thank God we finally have a curfew.

So there it is. Suddenly, we are in the grip of a pandemic, we are saying good things about our provincial government, our children are home 24/7 blithely broadcasting our private lives to online classmates and we’re yelling at our parents to stay home. The mental torque is excruciating.

No one is sure how the next few weeks will pan out for the country. Two things are clear, however:  Karachi’s neglected population is responsive – even after years of what can only be described as official abuse – to the authorities’ efforts. The groundswell of goodwill should not be wasted. More importantly, the Sindh government leadership has revealed it can actually lead and mobilise the government machinery for the greater good. They should keep up the excellent work and apply their efforts, energy and enthusiasm to the myriad travails that plague us: sanitation, water management, unplanned development, and crime come to mind.

The Sindh government could transform the lives of ordinary citizens and earn well-deserved appreciation. If that weren’t reward enough, when these leaders inevitably meet their Maker they would be transported to Heaven on the wings of the prayers of millions – win-win, as they say! Is anyone listening? Karachi ka kuch karona!

The author is a freelance writer and part-time student.