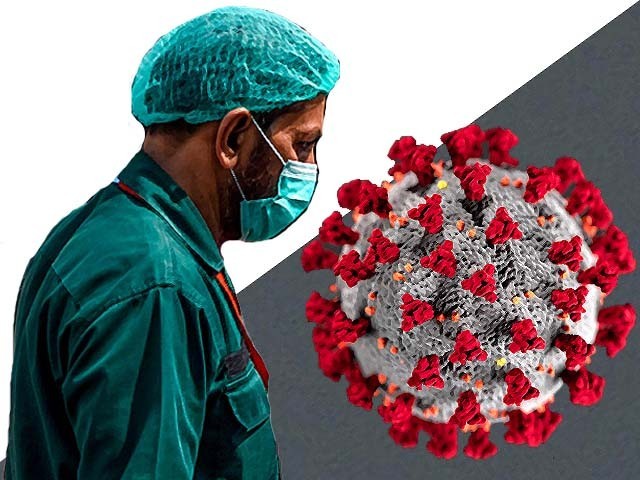 If we were in the middle of a military war, a media campaign against active-duty soldiers would be considered ‘distasteful’ at best, if not outright ‘seditious’. On March 16th, two doctors in Islamabad were shifted into isolation for treating a patient suspected of COVID-19 (coronavirus) infection. These doctors who put the patient on the ventilator were not equipped with Personal Protective Equipment (PPEs). Basic PPEs may include face masks, surgical gloves, aprons, and gowns. In a different war, these doctors would have medals being pinned to their chest. But in this crucial war for public health and safety, such healthcare professionals are being invisibilised because the state seemingly refuses to take responsibility for their well-being. Front line clinicians in government facilities often find themselves being maligned, not for negligence, but for basic demands like PPEs and other protective policies.

I’m a medical doctor and part of an organised effort to subdue the effects of coronavirus. The Awami Workers Party (AWP) has been setting up medical camps in underprivileged communities in Islamabad, and what I have seen in these camps is not particularly comforting. Would you like to hear the bad news first?

Things may get worse before they get better. Coronavirus spreads rapidly. Estimates suggest that between 50% to 70% of the world’s population could eventually be infected. From the looks of it, Pakistan would not be an exception, and the elderly and immunocompromised people would be the most vulnerable.

There’s no need to panic, however. COVID-19, although aggressive, is not necessarily lethal. A vast majority of the infected people eventually recover, but they may require proper medical treatment. The challenge, however, is that if everyone gets sick at the same time, our hospitals may not be able to accommodate everyone and offer adequate treatment. The objective isn’t so much to stop Coronavirus, but to slow its spread through social distancing and good hygiene practices.

This is significantly harder when our clinicians are not adequately equipped to handle this influx. The Young Doctors Association (YDA) has criticised the government’s inaction, while some doctors have suggested that they may stop working entirely. In addition to PPEs, healthcare workers – not just in COVID-19 wards, but everywhere – require easy access to hand-sanitisers. This demand has been interpreted by the media as ‘selfishness’, which is absurd. Would you like to be seen at the hospital by a doctor who is an active carrier of a coronavirus infection?

Healthcare professionals concerned about their own safety are not neglecting the ‘national interest’. An infected doctor or nurse must isolate themselves to prevent spreading the infection to vulnerable people. The more medical staff we lose to the infection, the harder it becomes to fight back during a health crisis.

It’s frankly a bit jarring that I even have to make this argument, because healthcare professionals are people who deserve protection. You wouldn’t send a soldier to Siachen with a plastic bucket on his head and a cardboard box as body armour. So why would anyone think it’s acceptable for a nurse to march into the hospital without PPEs and an administrative system that minimises risk of infection?

The fault lies not with the clinicians on the front-line, but the government officials who are glacially slow to react to this looming crisis. This is an administration that has consistently issued mixed signals about the severity of this crisis. This is an administration where the chief minister of Punjab ostensibly cannot tell the difference between a virus and an insect bite, and assured the clerics that the mosques would remain open. From a nightmarish quarantine camp in Taftan, to Imran Khan opening up the Pak-Afghan border, there’s ample evidence of mismanagement.

This is hardly a matter of affordability for the government. An establishment that can afford to spend Rs42 million to defend the government on the internet at the time of this public health crisis, can probably afford to provide enough PPEs to the healthcare workers. Instead of punching upwards at men in large offices who determine budgets and enact policies, much of the public outrage is being directed at ordinary men and women of the medical workforce. We need our doctors and nurses to be safe, more than the VIPs need their howling motorcades.