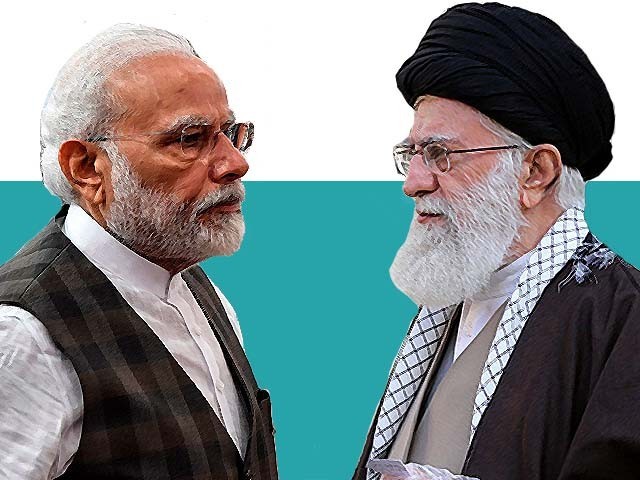 At the expense of sounding morbid, one can say India’s state-abetted anti-Muslim pogrom in New Delhi earlier this month presented an opportunity for Iran. In the context of downward trends in Indo-Iran ties in recent times, the potential for Iran to establish its credentials as a Muslim power in South and West Asia through a strong stance on India’s brazen anti-Muslim policies has risen considerably.

However, Ayatollah Khamenei’s recent statement on the Delhi pogroms failed to build upon strong rhetoric from Iranian state clerics last August when India annexed occupied Jammu and Kashmir (J&K). It, in fact, has harmed Iran’s thus-far erratic yet budding policy on South Asia in a number of ways. Khamenei stated on March 5, 202,

Considering where Indo-Iran ties currently stand, a statement falling short of condemning the Indian regime itself as the extremists is woefully inadequate. The conciliatory aspect of the statement which asks the Indian government to ‘confront’ the extremists points to quarters in the Iranian government displaying severe lag in grasping Iran’s lesser importance to India than Iran’s Gulf Cooperation Council (GCC) and Israeli adversaries.

The conciliatory aspect renders the statement weak, given both the severity of India’s anti-Muslim policies and India’s visibly closer Israel-GCC ties. The latter are more intimate than Indo-Iran relations ever were, as can be seen by the fact that Israel has even pitched an Israeli-GCC Mediterranean-to-Gulf trade corridor to the Indians to join. Compare this with India halting Iranian oil exports under American pressure – but still tossing the occasional bread crumb at Chabahar to keep the Iranians from drifting toward Pakistan – and there is ample reason for Iran to amplify its rhetoric on India.

India’s trajectory is evident. Iran slipping in conciliatory phrases in its comments on India’s anti-Muslim violence will not change this at all and only weakens Iran’s rhetoric on a crucial issue of oppression against Muslims at no real gain to Iran.

Additionally, Iran given its reliance on pan-Islamism as a major source of soft-power and deterrence against Sunni-majority populations turning hostile to it cannot afford to adopt a weak position on India’s anti-Muslim policies. Things will only get worse in India for Muslims and a soft Iranian stance on the issue will grow more untenable with time.

In what should alarm Pakistanis optimistic about a closer Pakistan-Iran understanding on Kashmir, a recent post shared on Khamenei’s English website reveals a dangerously flawed understanding of the Indo-Pak conflict on Iran’s behalf.

The post, by former political consultant to Iran’s Embassy in India Abulfazl Zare’i, takes the route on the Delhi pogrom which can be described as an ‘Indian Hindu liberal’ perspective. It decries India’s current state of affairs as a far cry from an allegedly peaceful India before Prime Minister Modi’s era despite India’s long history of state violence against its Muslims far predating Modi’s ascent and pins communalism in the subcontinent on the ‘secession of Pakistan from India’.

The sheer falsehood of the notion that Pakistan ‘seceded’ from India – the reality being that both states were carved out of the British India colony as the British departed – is the fuel that drives Hindu nationalist propaganda, be it of the Bharatiya Janata Party (BJP) or Congress shade. It is anti-Muslim in its very nature, seeking to portray the struggle of the Muslims of British India for their own country to avoid Hindu majoritarian rule as a reactionary ‘secession’ and destruction of ‘India’ by the British.

For nations with negative historical experiences with the British such as Iran, it is easy to fall for this narrative regardless of how easy it is to debunk it. India as a result is portrayed as a noble old country which had a part of it hacked off by the evil British to create reactionary Pakistan and spark ethno-religious conflict to keep India divided.

That India can get away with such lies is also a bonus to it, as well as Pakistan’s incomprehensible incompetence in setting the historical record straight (Pakistan’s leadership, in fact, itself ironically blunders into whitewashing pre-Modi India).

Many Muslims in Pakistan – and now undoubtedly in India as well – would be well within the realm of rationality to consider the post shared by Khamenei’s website an insult. The idea that Iran is a friend to the Hindus against the Muslims will severely damage Iran’s image and soft power in the region to extents that Iranian policies such as its support for Palestine cannot ameliorate.

Iran thus, due to incapacity to adopt a sufficiently strong rhetoric on India driven by the lethargy of certain sections of its diplomatic cadre who, wittingly or unwittingly, subscribe to anti-Muslim Hindu historical propaganda, shoots itself in the foot. That it does so while India happily upgrades ties with the GCC and Israel makes Iran a net loser in this scenario.