The scenario for Afghanistan after the US-Taliban deal 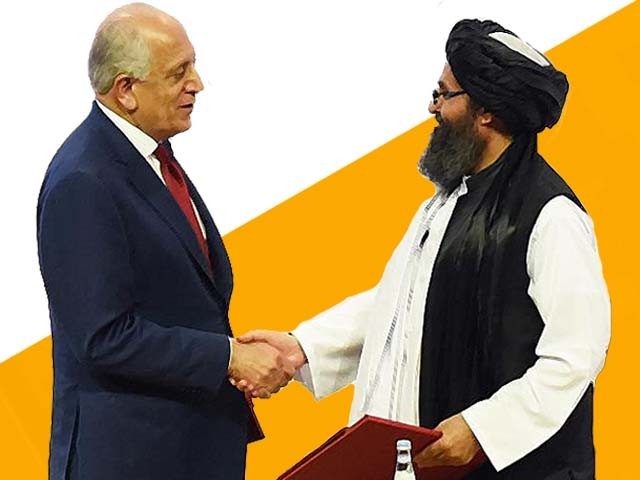 The tentative deal signed on February 29, 2020 between the United States (US) and the Afghan Taliban after almost two decades of war hinges on a successful execution of four main points. Firstly, America has to gradually withdraw its troops from Afghanistan over the next 14 months, with 5,600 troops to leave the country within 135 days. Secondly, the Taliban and the Afghan government (which was not a party to the deal) must open direct talks, which will be preceded by the release of 5,000 Taliban prisoners currently held by the Afghan government and the release of 1,000 prisoners in Taliban captivity. Thirdly, the Taliban further promised in the deal to prevent terrorist groups, such as Al Qaeda or the Islamic State (ISIS), from operating in the territory they control. Lastly, the Taliban agreed to end hostilities against the US and its allies. The deal has been hailed by the US as a diplomatic success, while the Taliban consider it to be a victory for them. Pakistan, which has acted as an enabler, sees the deal as a vindication of its long held stance. However, other regional and extra-regional stakeholders either remained silent or very sceptical. India seems to have taken this as a defeat because its use of Afghan soil for almost 20 years for launching proxies inside Pakistan will now become problematic after the US withdrawal.

But the jubilation following the signing of the deal was short lived since before the ink on the paper had dried, the Taliban launched several attacks on Afghan army bases since talks of prisoner swaps had initially fallen through. This resulted in a US retaliation in the form of air strikes targeting the Taliban, thus jeopardising the prospects of the envisaged success of the deal. Although the timing of this deal, given the rationale of war weariness experienced by all actors involved, provides good political mileage to President Donald Trump, it leaves several other American strategic objectives in the region unfulfilled; especially with regards to a potentially nuclear Iran, and the fast tracked completion of the China-Pakistan Economic Corridor (CPEC), the most critical part of Belt and Road Initiative (BRI).

The negotiations in Afghanistan, which have been ongoing since 2010, were already following a pattern set by the negotiations that ended American involvement in Vietnam. In 1968, North Vietnam and the US concluded a preliminary, procedural agreement that permitted the government of South Vietnam to join the talks. Five more years were needed to produce a substantive peace accord. That agreement fell apart two years after the last American forces left the country. The Afghan conundrum is far more complex than the Vietnam fiasco keeping in mind the duration of the conflict, nature of the war zone, characteristics and history of the warriors/insurgents, internal tribal dynamics and power politics, involvement of a number of regional and extra-regional actors and consequently dozens of belligerent proxies, shifting loyalties, war-profiteers in USA, involvement of the North Atlantic Treaty Organisation (NATO) countries, Afghanistan and its neighbours, ethnic and political polarisation, and above all the new great game being played in the same old arena now by three main global players instead of two.

It is a given that ultimately the success of any peace efforts will be the responsibility of the Afghans since only they can resolve their internal differences. Firstly, the stand-off between Ghani and Abdullah Abdullah will have to be settled, and only then can talks between the Afghan government and the Taliban bear fruit. The focus will have to be on a cessation of hostilities, disarmament, agreeing on a power sharing formula, merger of warring government forces and Taliban fighters, reassessing the modus operandi, providing financial support, improving the law and order situation, ensuring food security, controlling narcotics and smuggling, eliminating foreign terrorists’ footprints, and stopping the use of Afghans as mercenaries or proxies for foreign forces. Since there are no United Nations (UN) peacekeeping forces present nor is there any other institutional support available in Afghanistan to assist in finding answers to the above mentioned questions, the US and its allies will have to remain engaged in Afghanistan for quite some time to help improve the chances of a successful peace effort. If not, Afghanistan is prone to remain a bleeding wound which infects more than just the Central Asia and South Asia (CASA) region.

The presence of five US military bases in Afghanistan with 8,600 American troops over the next 14 months, along with the help of allied forces, is likely to help US military planners keep contingency plans in place to ensure Afghanistan does not slip back into a state similar to the 1990s. However, an end to US political and economic support could negatively impact stability in the country. The internal, external and regional spoilers who have thrived on American embroilment in its longest war are likely to augment their efforts to keep America stuck in the region. Therefore, America will have to fully and meaningfully cooperate with Pakistan to thwart such efforts, its flawed Indo-Pacific re-balancing policy notwithstanding.

Besides the US, Pakistan will also be better placed by keeping other main stake holders like China, Russia, Iran, Central Asian Republics, Turkey, Saudi Arabia, Qatar, United Arab Emirates (UAE) and friendly NATO countries involved in its efforts to make the Doha deal a success. For Pakistan, sending back Afghan refugees residing in Pakistan for over 40 years, effective sealing and monitoring of the Pak-Afghan border to eliminate human, drugs and other types of smuggling, and an elimination of the Indian clandestine footprint along with its proxies on both side of the borders must remain a priority. In this regard, Pakistan has a lot to learn from the Central Asian Republics neighbouring Afghanistan about to how they maintain a distance from the problems in there.

Another factor that needs to be seriously considered by Pakistan’s policy makers is how India succeeded in spreading its cultural and economic influence in Afghanistan, Iran and Central Asian Republics, bypassing and undermining Pakistan and thereby backstabbing Pakistan from Afghan soil. Given the scenario, failure to bring peace to Afghanistan is not an option for any party because a relapse into a 1990s like situation or another civil war will have far reaching ramifications. Afghans currently at the helms of affairs need to rise above their own political interests, end the ritual blame game, and seriously engage in dialogue with the Taliban and other international players to restore normalcy for the good of the Afghan people.

The author is a retired senior army officer and writes about international relations, diplomacy and geo-strategic issues.