Coronavirus: No longer a storm in a teacup 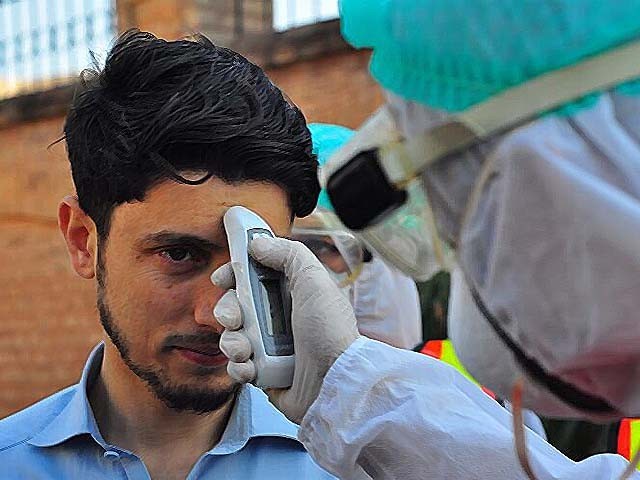 Pakistani rescue personnel check the temperature of a man during a drill against coronavirus in Peshawar. PHOTO: GETTY

Coronavirus, or COVID-19, which has so far infected more than 118,000 people in 114 countries, and led to 4,291 deaths, was declared a level six pandemic by the World Health Organisation (WHO) on March 11, 2020. What makes matters worse is that the virus has wiped out six trillion dollars from the global stock market during just the past seven days. Therefore it is of extreme importance that Pakistan comes up with an appropriate strategy to combat this menace.

On March 8, 2020, a German research paper explained the rapid spread of this virus. According to the study, during the earliest point of illness, when infected people are not even showing symptoms, they are the most infectious. The virus affects the upper respiratory tract of the patient and is shed out in large quantities while a person is sneezing, coughing or simply breathing. After approximately five days, this viral shedding decreases if the patients does not have any other serious illness hampering their immune system. People who then subsequently show early signs of pneumonia keep on shedding high levels of virus from the throat until day 10 or 11.

This pattern is the key difference between COVID-19 virus and Severe Acute Respiratory Syndrome (SARS) which had an outbreak in 2002 and 2003. The SARS virus started shedding later when it moved deep into the patient’s lungs. However, since COVID-19 sheds from the upper airway very early on, it is extremely hard to contain. People infected with COVID-19 are likely to be 1,000 times more infectious than the SARS virus, making the coronavirus spread rapidly. The SARS outbreak was contained after about 8,000 cases whereas the global count of confirmed COVD-19 cases has already crossed 110,000 according to the situation report issued by the WHO on March 11, 2020.

Understanding the demographics of COVID-19

China, where the virus originated, has the highest number of COVID-19 cases in the world and as a consequence, has the highest number of fatalities at 3,000. The second most affected country is surprisingly Italy, which has seen over 1000 individuals die from the virus. This is particularly shocking seeing as how geographically, Italy is quite distant from China. However, one factor affecting the country’s death rate may be the age of its population, keeping in mind that Italy has the oldest population in Europe, with about 23% of residents being 65 or older.

This also makes COVID-19 different from past pandemics. For instance, the notorious Spanish flu devastated and affected young  and old alike. In contrast, it would appear that the COVID-19 is more likely to harshly affect people with compromised immunity due to pre-existing conditions and older age.

According to the data released by WHO and the Chinese Centre for Disease Control (CCDC), the mortality rate is at 0% for ages zero to nine and only climbs to about 0.2% for the ages 10 to 39, which means that one in 500 infected people from this age group died. The mortality rate starts increasing after the age of 40 and reaches its peak for people in their eighties with a mortality rate of roughly 15%, which amounts to the death of one in six infected senior citizens.

Where does Pakistan stand

As per the 2017 census of Pakistan, we are the fifth most populous country in the world with an estimated population of 207,774,520. An estimated 30% of the population is nine years old or younger whereas at least 50%  of the population falls between the ages of 10 to 39. Only a miniscule 3.5 % of people are above 65. Therefore, it would appear that Pakistan’s age demographic is well-suited to combat the coronavirus in light of the data released by the WHO and CCDC.

However, as mentioned previously, the virus greatly affects those individuals who have pre-existing conditions and a weak immune system. Pakistan already suffers from a lack of medical infrastructure, a dearth of basic sanitation, poor hygiene and unclean drinking water which makes for a disease-conducive environment. Furthermore, around 92,000 children in Pakistan die due to pneumonia each year whereas the number of children that contract the disease is much higher. Additionally, according to the Journal of the Pakistan Medical Association, 6.6 million adults in Pakistan have diabetes, which means that we are 10th on the global diabetes index. In fact, according to other estimates, Pakistan is sixth on the list. There are many other clinical conditions which adversely affect a fairly large part of our population such as kidney failure, hepatitis B and C, tuberculosis and cardiovascular diseases. It is also worth mentioning that in our urban areas, 26% of women that fall in the age range of 15 to 44 are anaemic. This percentage increases to 47% in the rural areas, already making them susceptible to related health problems.

Therefore, the number of confirmed coronavirus cases could rise substantially from 29 if appropriate measures aren’t taken.

At a time when most were unable to grasp the complexity of the situation, the Sindh Education Ministry thankfully took timely action when the first case of COVID-19 was reported in Karachi on the 26th of February and closed educational institutions for two days. The following two weeks saw a series of extensions with the provincial government finally deciding to call off educational activities till 30 May, 2020 and now the federal government also finally following suit.

While children are not overtly susceptible to contracting the disease, they can play the role of a carrier. Children are virus reactors or carriers and they spread the disease to other people, so in our case, where children quite often live in close proximity to their grandparents, there are chances that they may transfer the disease to the elderly. Regardless, if we look at the overall statistics of our children’s health, what is to say that they will not contract the disease themselves, considering their overall immunity? I, being an educator, come in contact with numerous children each day and have observed that during flu season, in a class of 28 children, around four are absent each day, because they are ill. Therefore, the general immunity of our children is questionable at best.

So what can we do?

It would be unwise to assume that this disease will disappear with the onset of summer since there are no studies that confirm that high temperatures affect the virus. All we can do is maintain hygiene and try and boost our immune systems. We can do this by eating healthy and adding more greens to our diet. Sleeping well for around seven to nine hours is also recommended because adequate rest also boosts our immunity. Smokers must quit or at least, curtail their habit while exercising and doing yoga is also advisable, however, it would be safer to stay away from gyms and public places in general. Those who already have a pre-existing medical condition should try to limit their contact with others as much as possible and try to stay indoors.

Infectious disease expert Micheal Osterholm believes that there are is a chance that in six months, the coronavirus could lead to 480,000 deaths globally. Speaking to Joe Rogan, he also conveyed that doctors in Milan, Italy are struggling to cope with the sheer volume of patients because they have limited space in hospitals and are seeing an alarming increase of the infection in adults aged 40 and over. Spain has also seen a spate of coronavirus related deaths and so, it is no surprise that the WHO has declared Europe as the new epicentre of the pandemic. Therefore, we should be extremely wary of the virus, seeing as how developed European countries with adequate healthcare facilities are failing to cope with the spread of the disease.

The writer has a masters in micro-biology and is an educationist by profession. She has completed a certification on family engagement in education from Harvard. She is also the author of the blog www.acupofkarachi.com and tweets @kiran_kanwal (twitter.com/kiran_kanwal)