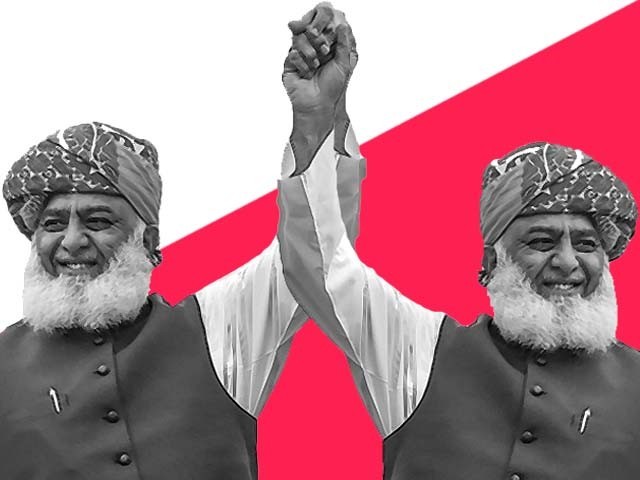 The Jamiat Ulema-e-Islam-Fazal (JUI-F) made waves once again when Maulana Fazalur Rehman threatened to dislodge the Pakistan Tehreek-e-Insaf (PTI) government through a long march and sit-in last year. It seems that Fazal has a knack for ensuring that the JUI-F remains in the headlines, for better or for worse. JUI-F is a faction of Jamiat Ulema-e-Islam (JUI) which was headed by Shabbir Ahmad Usmani in 1947 after parting ways with the Markazi Jamiat Ulema-e-Islam. Fazal’s party came into existence during the martial law of General Ziaul-Haq, when Fazal split with Maulana Samiul-Haq, who later formed his own faction of the party called Jamiat Ulema-e-Islam Sami (JUIS). However, it has always been Fazal who, through his shrewd tactics, has manged to remain relevant in the power corridors while also winning a good number of seats in comparison to other religious political parties in every general election.

JUI-F experienced the peak of its electoral politics during the era of General Pervez Musharraf, when the religious political parties fought the 2002 general elections on the platform of the Muttahida Majlis-e-Amal (MMA). The MMA won 63 seats in the National Assembly. 41 of those were won by JUI-F under the platform of MMA and, as a result, Fazal became the opposition leader. In the general elections of 2008, the MMA only won eight seats but Fazal managed to become a part of the Pakistan Peoples Party (PPP) led coalition government. However, he later left it when he saw that the winds were blowing against the PPP. In the general elections of 2013, Fazal’s JUI-F fought the elections on its own platform instead of again aligning itself with the MMA platform. The party was able to win 15 National Assembly seats and Fazal became an ally of the Pakistan Muslim League-Nawaz (PML-N). However, it was in the 2018 elections that Fazal lost his seat in the National Assembly. As a result, Fazal, right after the election results were declared, cried foul. But the important thing to understand here is that unlike other religious political parties such as the Jamaat-e-Islami, Fazal keeps changing the political narrative of JUI-F according to his own needs.

In the 1990s, most of the religious parties, and even a right-wing centrist party like PML-N, were opposing the rule of Benazir Bhutto. At that time, Fazal threw his weight behind Bhutto and not only supported her politically but also created a counter Islamist narrative against PML-N and several religious parties through his organised network of madrassas. However, in 2020, Fazal opposed the Aurat march and his party used the religion card against the women who were marching for their rights on International Women’s Day. Likewise, despite opposing General Zia’s martial law, Fazal supported the martial law of Musharraf and he, along with the MMA, played a key role in passing parts of the controversial amendments to the constitution under the legal framework order (LFO).

Last year when Fazal threatened to topple the PTI government he added to his political capital in Punjab, Khyber Pakhtunkhwa (K-P), and Sindh. However, in a hurry to take credit for dislodging the government and because he was ditched by his political allies like PPP and PML-N, Fazal remained unsuccessful in his attempt to oust Imran Khan. So, at the moment, Fazal is quite helpless since he has already played his cards but neither PML-N nor PPP were ready to back him. Nonetheless, the failed attempt to dislodge the PTI government will not really dent the loyal JUI-F vote bank. In the last few elections the party has not lost a considerable number of seats and is usually able to maintain its tally of 12-15 seats in the National Assembly.

The thousands of madrassas controlled by JUI-F help in keeping Fazal’s vote bank intact, and it is also a political reality that Fazal can prove to be a key player in the post US-Taliban deal era. Fazal enjoys good relations with major factions of the Taliban and, during the Musharraf era, JUI-F was instrumental in brokering a deal with the Tehreek-e-Taliban Pakistan (TTP). First, the Shakai agreement in South Waziristan in 2004 and then another deal in North Waziristan in 2006. If Fazal’s influence will be required in this regard, his party could form a coalition government in Balochistan; and if PPP or PML-N are able to deny the Awami National Party (ANP) a possible victory in the next general elections then Fazal’s JUI-F could also become a coalition partner in the K-P government.

This is as good as it can get for JUI-F if the winds blow in its favour. Love him or hate him, Fazal is undeniably a smart political player who knows how to use the religion card in politics and when to exploit the anti-establishment and pro-democratic sentiments in the urban areas of the country. However, due to JUI-F’s regressive narrative and inability to win over the progressive or even the far-right centrist vote bank, it is unlikely that JUI-F will amass more than 15-20 seats in the National Assembly (unless it gets the backing of certain visible and invisible allies). Fazal’s problem remains that his core constituency are the hardcore religious voters. If Fazal tries to attract the progressive vote bank from urban areas he will risk losing his fundamental support base. This could result in a potential split in JUI-F, like the one which occurred in the 1980s. Hence, JUI-F will not go down that road anytime soon.

In wake of the largely stagnant vote bank of religious political parties, Fazal will be happy to simply regain his own National Assembly seat in the next elections. JUI-F will be concentrating more on K-P and Balochistan since the party will be eyeing the slot of chief minister in at least one of the provincial assemblies. Therefore, JUI-F is likely to continue to play the role of a crucial ally or a noisy opposition depending on how it fares in the next general elections.