A female baby, a waste of space 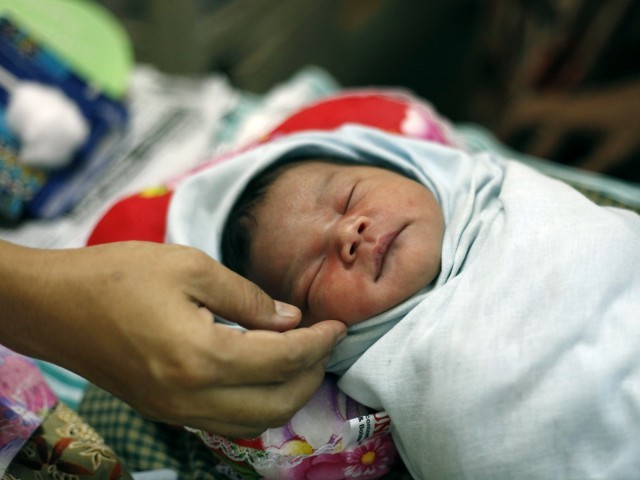 Sana's mother-in-law stated that she had disappointed her and the family hugely because she was expecting a girl. PHOTO: REUTERS

It’s pitch dark outside, and not a sound can be heard anywhere. He hears the soft ruffling of his new-born daughter stir and he sneers at her in disgust.

“Waste of my money and a waste of space,” he mutters angrily.

As if sensing her father’s displeasure, the baby starts wailing softly. That’s it – he grabs her roughly, and before her mother can react, the baby is murdered. The only crime she had committed was that of being a girl.

Unfortunately, manly female infants meet the same end in Pakistan. According to The Edhi Foundation, it was estimated that more than a thousand infants were killed or left to die last year. The tragic truth is that most of these figures are gathered from the main Pakistani cities while the number of killings from the rural areas go undiscovered. The Edhi Foundation has also said that it has found forty babies dead in garbage dumps and sewers.

The rate of female infanticide has risen in Pakistan and it is believed that poverty is one of the main factors behind this sad reality. Because many women are not permitted to work and become the ‘financial responsibility’ of fathers and husbands, girls are seen as a ‘greater economic burden’.

Sana Siddiqui lived in one of the wealthiest sectors in Islamabad. Her husbands family was well-educated. Yet, she  sat in front of me, dabbing at her tear-stained cheeks with the ends of her dupatta.

Just 22, she was expecting her first child – a seven-month-old baby girl. She told me morosely that avoiding knowing the gender of the baby was probably the best decision if you had a family like hers. However, intense pressure from her nagging mother-in-law eventually pushed Sana to enquire whether the baby was a boy or a girl.

She went on to narrate how when her mother-in-law found out the gender of the baby, she replied with frustration:

Sana told me how her parents had four daughters and they were all loved equally. She said that the problem of girls and boys being differentiated didn’t dawn on her up till she married her husband. Such thought is widely prevalent in Pakistan. Sana’s mother-in-law had declared that she had disappointed her and the family hugely because she was expecting a girl.

Sana isn’t the only woman who lives in dread of giving birth to a daughter. Many in Pakistan find themselves under tremendous pressure to bear sons, and when girls are born they are wiped off the earth without a trace.

Infanticide has also become rather widespread due to abortion being declared an illegal practice in Pakistan (with the exception of when the mother’s life is at risk due to the pregnancy). Legalising the act of abortion would greatly reduce infanticide, but that is an altogether different issue.

According to the law, the punishment of abandoning an infant is seven years in jail, and anyone found guilty of secretly burying a child can be sent to prison for two years. Murder is punished with life imprisonment. However, these crimes go undetected most often and people are rarely prosecuted due to a poorly trained police force.

Our religion Islam teaches us that the reward for giving birth to a daughter and bringing her up is paradise. The history of the life of Prophet Muhammad (pbuh) shows only tolerance and respect towards women. Then why do so many people despise the idea of having a female child?

Does it occur to these narrow-minded people that the reason why the world continues to go on is due to the hardships, determination, and tolerance a woman undergoes for nine difficult months? Also, do men realise that it is their sperm that determines the gender of the child, and the woman has nothing to do with this process?

Killing an innocent baby is the most horrendous crime any one can ever commit – it is a grave sin.

Do not let a female child become a burden; provide her with the most beautiful upbringing, let her have access to the best education you can afford, cherish her, and adore her rather than looking down on her as if she were the dust under your feet. She is a blessing from God.