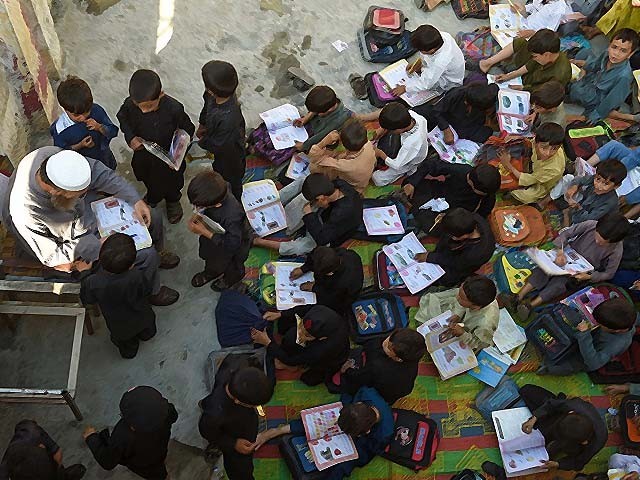 Boys attend a class at a school in Mingora. PHOTO: GETTY

If you were born in the early ’90s and attended school in Pakistan, it is likely that you were either subjected to or witnessed someone else being subjected to some sort of physical punishment in the classroom. Admittedly, most of us laugh at such incidents in hindsight, however, it is not safe to assume that everyone has the emotional capacity to overcome potentially scarring instances of physical abuse. Fortunately, I did not have to endure any forms of physical punishment, but some of my peers were not so lucky. When I was 10, I briefly attended a private school in Karachi and the only discernible memories I have from that time contain overly stern teachers, who would not risk sparing the rod, lest they spoil the child.

I still remember my classmate’s palm outstretched in front of him, as a teacher relentlessly hit it with a plastic ruler while tears welled up in his eyes. I also remember another teacher grabbing and pulling a girl’s ponytail, while many would indulge in emotionally abusing the children.

One would  think in this day and age, teachers would have moved away from such barbaric practices but unfortunately corporal punishment is still rampant at many schools in our country. It was just six months ago in Lahore that 15-year-old Hunain Bilal was severely beaten by his teacher, Kamran, for not memorising a lesson. The beating consisted of the teacher repeatedly punching the boy after which he caught him by the hair and smashed his head in the wall. These were the details that made it to the First Investigation Report (FIR) lodged against the assailant, how bad the actual ordeal was for Bilal can only be ascertained by the fact that he did not survive, succumbing to his injuries a few days later.

A similar incident was also reported at a private school in Karachi just a month after Bilal’s demise. Abdul Rehman, 11, was taken to the principal’s office because his teacher caught him exchanging ties with his classmate. This innocent act prompted the principal to smack the nap of Rehman’s neck, followed by a swift kick in his abdomen. Let this sink in, a fully grown man, kicked an 11-year-old in the abdomen for merely exchanging ties with his friends. The child had to be rushed into emergency surgery later in the day after he complained of passing blood in his urine.

On January 15, a six-year-old was mercilessly punched, kicked and then thrashed with a cane at a private school in Attock because he had not memorised a lesson he was assigned the day before. The child ended up in the hospital because of how badly he was beaten by the teacher. It is also extremely unfortunate that abusive teachers are rarely penalised and quite often, are supported by the school’s administration and the principal as well as was seen in this case.

These are just a few of the cases of violence against children at schools, which are actually reported. There are many atrocities which never see the light of day, essentially minimising the on paper scale of the issue, highlighted more accurately by a report issued by the Society for the Protection of the Rights of the Child (SPARC) in 2010. The report states that corporal punishment and related trauma causes up to 35,000 children to drop out of school every year.

As expected, this trauma can have long lasting effects on a child’s mental health, with a study by PhD student Jorge Cuartas’, later quoted in the Havard School of Education publication, showing that the same areas of the brain are affected by corporal punishment as those affected by severe sexual abuse. According to new guidance released by the America Academy of Pediatrics (AAP), titled “Effective discipline to raise healthy children” all forms of corporal punishments and even yelling at children are “are minimally effective in the short-term and not effective in the long-term.” The AAP further doubled down on why it is not advisable to subject children to physical punishment, stating,

Children who are spanked are more likely to be aggressive in their behaviour, as they have been desensitised towards physical abuse. Such children are also more likely to develop mental health problems, initiate violence against partners and fall victim to substance abuse. Suffices to say, corporal punishment is a menace that must be stamped out with authority throughout the country, both at schools and religious seminaries.

Sadly, even though Pakistan is a signatory to the Convention on the Rights of a Child (CRC), socio-cultural beliefs, practices and the legal system continue to perpetuate the use of corporal punishment as a disciplinary tool. The fact of the matter is that Section 89 of the Pakistan Penal code 1860 No XLV permits parents, teachers and other caregivers to use corporal punishment to discipline children aged 12 and below.

“Nothing which is done in good faith for the benefit of a person under 12 years of age, or of unsound mind by or by consent, either express or implied, of the guardian or other person having lawful charge of that person, is an offence by reason of any harm which it may cause, or be intended by the doer to cause or be known by the doer to be likely to cause to that person.”

All is not lost, however and on February 13, the Islamabad High Court (IHC) accepted singer Shehzad Roy’s petition to ban the use of disciplinary violence in school and suspended section 89 of the Pakistan Penal Code (PPC) in the federal capital, effectively banning corporal punishment for children under the age of 12. Although a step in the right direction, it leaves much to be desired as it is only effective in Islamabad. Additionally, several attempts have been made in the past to curb the menace that is corporal punishment, to no avail.

In July 2006, during the meeting of the South Asia Forum, following the 2005 regional consultation of the UN Study on Violence against Children, Pakistan expressed its commitment to abolish all forms of corporal punishment against children. In 2014, the government once again expressed interest in reforming law and launching a national campaign against corporal punishment. In January 2017, the Sindh Prohibition of Corporal Punishment Bill was also passed but its implementation leaves a lot to be desired.

I am appalled by how such incidents do not get more attention from lawmakers in the country. I can only assume it is because they largely belong to the more influential echelons of society and perhaps do not fully grasp the cruelty of what is happening to our children or maybe it is because Pakistan is a melting pot of problems and this is one such problem that just slips through the cracks despite the country reiterating its commitment to prohibit corporal punishment.

Perhaps some of the blame also falls on the parents, as in certain instances, despite knowing about the abuse their child is being subjected to, they will still opt to keep the child in the same school. Or worse, sometimes parents will rough their children up on the regular, making them believe that corporal punishments are part and parcel of  the way things are done. Such children are even less likely  to report abuse.

It is therefore of utmost importance to take the ban for what it is, a baby step in the right direction for protecting our children from the anger and frustration of grown men. We as a country, must ensure that the IHC ban creates a ripple effect that eventually has a lasting impact on legislation, so that we can safeguard our children’s future and ensure that young lives are not snuffed out too soon.

The writer has a masters in micro-biology and is an educationist by profession. She has completed a certification on family engagement in education from Harvard. She is also the author of the blog www.acupofkarachi.com and tweets @kiran_kanwal (twitter.com/kiran_kanwal)

Coronavirus: No longer a storm in a teacup