To thrash or not to thrash: Marrying again without the first wife’s permission 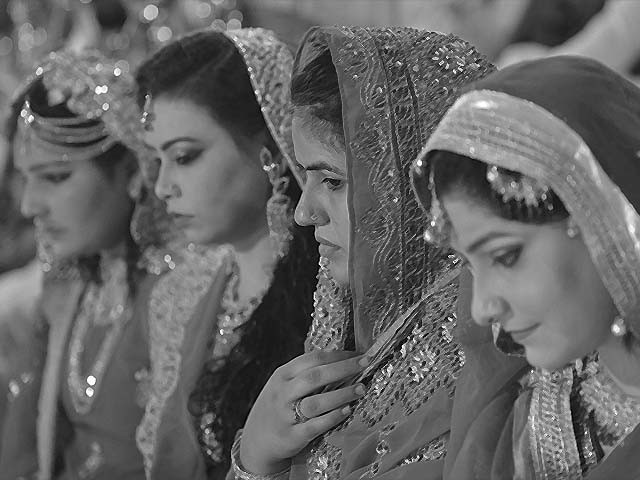 A video recently went viral where a man was being thrashed by his first wife after he was caught during what was to be his third marriage. According to details, the man’s first wife, Madiha, had already forgiven him for trying to secretly get married a second time and had accepted the second wife. However, when Madiha found out about her husband’s latest episode of halal promiscuity, she confronted him during the wedding and showed a copy of the marriage certificate to Rafiq’s future in-laws who promptly began to thrash him, forcing him to escape the venue and find refuge under a truck.

Although it is true that Islam gives the right to a man to marry four women at the same time, polygamy has always been a tricky subject in our country. This incident also triggered the age old debate on whether a man is allowed to get married a second time or not without the first wife’s permission.

The Council of Islamic Ideology’s (CII) position on the matter is clear. A man does not need his first wife’s permission to marry another woman. Fortunately, the CII’s findings and opinions are not legally binding. Additionally, if I wanted the opinion of 19 old men regarding women’s rights, I’d much rather attend a Jamaat-e-Islami (JI) women empowerment conference.

Although to be fair to the CII, it does have one more female member than JI’s women empowerment conference did. Unfortunately, that “one more female member,” is the only female on the entire 20-member council, meaning that the female representation on the CII is a whopping five per cent when compared to the zero per cent on JI’s women empowerment conference.

Therefore, the sane thing to do would be what most governments have done in the past: ignore what the CII opines and look at the law instead. Section VI of the Muslim Family Laws Ordinance 1961 which revolves around polygyny, states that :

“(1)No man, during the subsistence of an existing marriage, shall, except with the previous permission in writing of the Arbitration Council, contract another marriage, nor shall any such marriage contracted without such permission be registered under this Ordinance.”

The process for submitting an application requesting permission from the aforementioned arbitration council is then outlined in the next section of the ordinance.

“(2)An application for permission under sub-section (1) shall be submitted to the Chairman in the prescribed manner, together with the prescribed fee, and shall state reasons for the proposed marriage, and whether the consent of existing wife or wives has been obtained thereto.

As a result, it is apparent that the arbitration council’s approval is directly dependent on the wife’s permission and so, a man cannot get married a second time without the expressed consent of the first wife. In addition, a man also has to justify the need to get married even after he gains permission from the wife. It is also important to add that failure to obtain permission renders the second marriage null and void which means that any resulting offspring will most likely be bullied for life by their friends.

If this is not motivation enough, then perhaps the threat of potential jail time will serve as the required catalyst. Just last year, a man was sentenced to 11 months in prison because he got married a second time without the first wife’s consent. He was also made to pay a fine of Rs 2,50,000 which most certainly would have left him wishing he had chosen chicken over mutton for his valima biryani. In a separate case, a man was jailed for six months and fined Rs 200,000 for attempting to circumvent section six of the 1961 act.

Therefore, the fact of the matter is, the 1961 statute, which was introduced by the Ayub Khan regime, is unequivocally clear regarding the issue at hand. More importantly, time and again, the court has applied the law in its present form and so, by extension, it has been ratified in modern times as well. It is also important to keep in mind that the wife’s consent is only the first step towards polygyny because the arbitration council can still reject the applicant’s request.

In June 2019, the Islamabad High Court once again emphasised the importance of the arbitration council’s role in the entire process which is understandable, seeing as to how they determine whether or not the applicant has ample, rather justifiable, reasons for getting married a second time. Keeping these points in mind, marrying for the second time is not all flowers, bliss and biryani. Not only can it get you thrashed, it can also land you in prison.